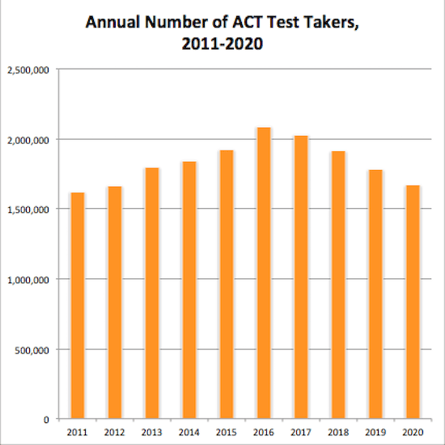 In recent years, more and more students have been taking the ACT than ever before. But what does this change in participation rate mean for the average ACT score?

As you'll learn in this article, while ACT scores have been fairly stable in the last few years, there have been some dips and peaks in scores in the last 30 years. Let's take a look at what's happening.

Average ACT Scores for Past Years

Let's look at some charts for average ACT scores over the past couple of decades. These will show us some trends in the ACT world that have led to recent changes in the test.

In the 1992-1996 ACT scores, there was a general increase in Math, Reading, and Science scores.

In the 1997-2001 ACT scores, there was an increase in English and Math and a decline in Science and Reading. Also, in 1999, the ACT broke the one million test-taker ceiling for the first time.

As you can see, ACT scores kept increasing until 2007, when there was an all-time composite score high of 21.2. After that, however, all subscores except English and Science consistently declined.

After 2007's peak, there was a general decline in scores across the board for nearly a decade. In 2013, ACT, Inc. instituted changes to the ACT to better reflect national curricula, which is possibly reflected in the general stability of composites and subscores from 2013 onwards (with the exception of Math, which has steadily decreased since then).

*As of 2018 ACT seems to have opted to no longer provide information about Writing score averages (except indirectly through ELA scores).

In the last five years, the number of ACT test takers has dropped (in conjunction with the number of SAT test takers rising), which has correlated with a slow decline in scores across the board. There was an especially large drop in both test takers and average scores for the class of 2021, no doubt caused at least in part by the challenges and confusion of the coronavirus pandemic and schools changing their standardized test policies.

Average ACT Score Trends: What Do the Numbers Mean?

As the charts above indicate, there was a moderate and gradual increase in average ACT scores until they peaked in 2007. After, average scores began to decline until 2014 when they increased slightly before settling back down towards the same levels they were at in 2004.

There has been discussion that the downward trend in average ACT scores could be a result of the No Child Left Behind Act and the test-based teaching style in US schools. This slight increase in ACT scores in 2014 could be attributed to the changes ACT, Inc. made to the ACT so that it could better align with high school curricula. Overall, though, average ACT scores have remained relatively stable.

For a long while it was predominantly students in the Midwest that took the ACT, but lately the test has begun to spread to the rest of the US as more and more states are requiring students to take it.

Consequently, more students started taking the ACT each year until 2016, when the new SAT was introduced (since when, the number of ACT test takers has declined back down to 2012 numbers).

Even at the peak of more than 2 million students taking the ACT, however, the data shows that students generally do better on the ACT than they do on the SAT—for which there has been a steady, stronger decline in scores. (The long-term results of the 2016 SAT redesign aren't yet known.)

Overall, the white, Asian, and two or more races subgroups have the highest ACT score averages, with Asian scores consistently increasing. By contrast, African American and American Indian/Alaska Native subgroups have the lowest ACT averages, likely because they are typically the most disenfranchised groups.

Now that you know about the average ACT scores, it's time to figure out what a good ACT score is for you specifically.

If you're definitely decided on the ACT, read our in-depth guides to prepping for the ACT. If you don't have a lot of time left, use our last-minute ACT cramming tips. Got time? Then learn how to come up with your own ACT study schedule.

Not sure whether you should take the ACT or SAT? Take a look at our article on the differences between the ACT and SAT to help you determine which test is right for you.