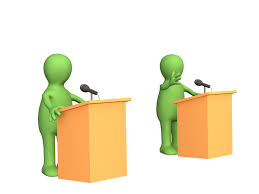 There will only be 1 Conflicting Viewpoints Passage on the ACT Science section (out of 7 total passages). It can appear at any point throughout ACT Science. To read about the other types of passages, check out our article on the 3 Types of ACT Science Passages.

In this article, I will:

Overview of the format of Conflicting Viewpoints Passages

I will delve into more information on each part below: 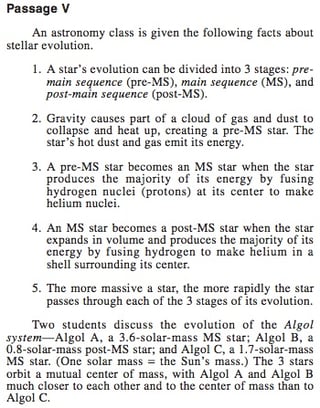 No matter the length, the introduction to the Conflicting Viewpoints Passage is always important. Do not ignore the introduction or forget about it as there is usually one question that you cannot answer without reading it. 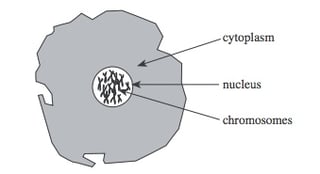 The visual is not usually necessary to answer any questions, but rather it is just there to help you imagine what is being discussed. For example, the visual above provides no data; it simply shows the location of the nucleus, chromosomes, and cytoplasm in the cell. The majority of the questions will instead ask about:

This is the meat of the passage. This is where the points of view of each scientist/student are fleshed out. Pay close attention as you read. The bulk of the questions ask you about this part. Also, do not get thrown off if they disguise points of view as different theories such as in this Conflicting Viewpoints Passage: 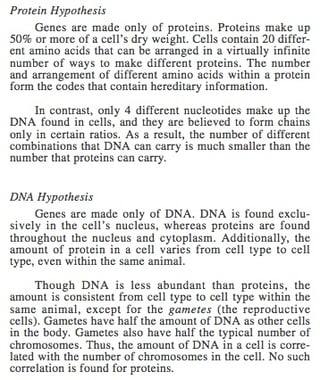 Make sure you identify the similarities and differences of each person or theory. If you are having trouble identifying the point of view, I recommend looking at the first and last sentence of each person's mini-passage. Usually, the main idea is spelled out there. In the example above, the first sentences of Protein Hypothesis and DNA Hypothesis state the point of view. Understanding the points of view fully will serve you best when you start attempting questions:

There are always 7 questions, no more, no less. There are two types of ACT Science questions used with Conflicting Viewpoints Passages that I will delve into next:

Now that we have an overview of what this type of passage entails, we'll dig into the two types of questions that come along with this passage:

Understanding Viewpoints Questions: What They Are and How to Answer Them

As I said above, the Scientist 1 / 2 portion will present each Scientist's point of view with the supporting points. These questions check to make sure you really understand each author's/theory’s point of view.  Here are some example Understanding Viewpoints questions:

Rules for Answering These Questions:

ACT Science Tip #2 - Some questions require logic as well as understanding the point of view such as the last question above:

Which of the following would support the DNA Hypothesis?

ACT Science Tip #3 - Some questions are as easy as repeating a fact. Some questions will ask you to just relay facts you read in the passage such as:

According to Protein Hypothesis, genes are made only of:

ACT Science Tip #4 - Ignore the validity of the viewpoint. Sometimes one viewpoint will be factually false, and you will know it from your previous science studies. Ignore it! You still need to understand the viewpoint and be able to answer questions about it.

If a viewpoint said that the Earth is the center of the Solar System and you were asked what best supported this viewpoint, you would need to pick an answer choice that supported it such as “respected philosopher Aristotle taught this model.”

Even though you know the viewpoint is false, you need to be able to articulate the point of view and its supporting arguments.

ACT Science Tip #5 - Your understanding needs to go beyond talking about each point of view distinct from one another, which leads us to the other type of question:

Comparing Viewpoints Questions: What They Are and How to Answer Them

These questions ask you to point out the similarities and differences between the authors. Here are some example Comparing Viewpoints questions:

Let's attempt some Comparing Viewpoints ACT Science practice questions from the same passage keeping in mind the same rules as before:

ACT Science Tip #1: Make sure you're considering the correct point of view and answering the correct question. This is especially important on the Conflicting Viewpoints questions that ask, "Which of the following would support Student 1, but not Student 2?" You should circle and/or underline the Student you are looking to support, in this case, Student 1. Put an X through the Student you are not looking to support. Such as I have done below:

Consider first, what is the question asking us? The question asks us to find the statement that both DNA and Protein Hypothesis would agree with. To do this, you need to use process of elimination. Start by looking at A and work your way through the answer choices. Answer choice A is directly stated in DNA Hypothesis and Protein Hypothesis mentions that protein makes up over 50% of the cell, so A seems like a good choice.

Which of the following would support Protein Hypothesis, DNA Hypothesis?

Start by circling and/or underlining and/or crossing out as we did above:

Now that we have a full understanding of what these passages are like, what questions characterize this passage, and how to solve those questions, let's discuss the overall approach to integrating this all together. If you find yourself running out of time, you may find this approach especially helpful.

First off, Conflicting Viewpoints Passages will take you the longest because as I discussed above, you need to have a full understanding of the passage to answer the Understanding Viewpoints and Comparing Viewpoints questions. So save it for the very end - finish the other 6 passages before attempting this one or it will slow you down.

If you find yourself struggling to remember who believed what, write yourself mini-summaries in the margins after reading each viewpoint such as “pro-comet theory.” Check out this example:

Which of the following phrases best describes the major point of difference between the 2 scientists’ hypotheses?

In this Comparing Viewpoints problem, you are asked to define the major difference between Scientist 1 and 2. Well, according to our awesome notes, Scientist 1 thought the object was a comet, and Scientist 2 thought the object was an asteroid. While there may be other minor differences, this is the major difference in point of view, so the answer is D. You could use process of elimination on this question, but it would have taken longer than simply matching your summary to the best answer choice.

Common problems you should avoid when answering the questions:

There are 2 types of questions:

I hope you feel ready to rock the Conflicting Viewpoints Passage!

Like this article? Want to improve your ACT score by 4 points?

Our program is entirely online, and it customizes what you study to your strengths and weaknesses. If you liked this Science lesson, you'll love our program. Along with more detailed lessons, you'll get thousands of practice problems organized by individual skills so you learn most effectively. We'll also give you a step-by-step program to follow so you'll never be confused about what to study next.