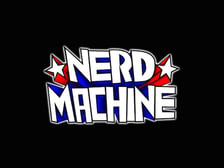 Every day you have a plan: whether it’s going to school or the movies. You make plans if you don’t already have a plan. Scientists / Researchers are major planners and control-freaks (get it science nerds?).

The ACT Science section asks you to figure out what that plan was and how it could hypothetically change. These two types of questions are typically found in Research Summaries Passages.

To learn more about this type of passage and learn useful ACT Science tips, check out the 3 types of ACT Science passages.

In this article, I'll cover:

Throughout the article, I'll dive into real ACT Science practice questions and provide ACT Science strategies along the way.

The Two Types of Studies

In Observational studies, scientists simply collect data and study differences. For example, there is an ACT Science passage about measuring the beak depths of finches from different neighboring islands.

In Experimental studies, scientists create an experiment where they choose to change certain variables and see how the result changes in response. For example, there is an ACT Science article about giving tadpoles varying amounts of a certain chemical and seeing how it affects their transformation into frogs. 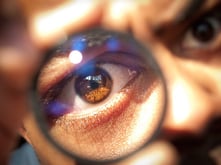 Man, I'd hate to be a tadpole under his microscope.

In both Observational and Experimental studies, scientists are looking for the differences between different conditions. It's not that meaningful to just provide a single data point - for example, "finches on Island A had an average beak depth of 8 mm." OK, great - what does this mean? Is 8 mm large or small? -Without comparisons, it's hard to know the importance or meaning of a study.

Scientists do compare apples and oranges.

This is also where study design differs - scientists will study different aspects of the same general field to find different answers. In an ACT science passage, you'll typically see multiple experiments and studies within a single passage (Particularly in Research Summaries and Data Representation Passages - again for more information about the 3 types of passages in the act science section click here). They will be labeled Experiment 1 / 2 / 3 or Study 1 / 2 / 3. Each experiment or study will be related to each other, but different in major ways. The experiments may measure the same change but use different independent variables, which we will discuss next:

Scientist 1 is running an experiment to see how fast a rubber ball rolls down an incline. For each trial of the experiment, Scientist 1 uses different inclines of specific angles. Scientist 1 tested an incline of 10, 25, and 50 degrees. The scientist then timed how fast it took for the ball to roll from the top to the bottom of the incline. What do you think are the independent and dependent variables here?

Scientists might conduct experiments with more complicated scenarios like circuits or heat transfers, but the concept is the same.

ACT Science Tip #2: in observational studies, researchers don't have independent and dependent variables, as they don't really control what they are studying - they're just observing. But don't worry - the ACT won't ask you to make this distinction; this note is just to improve your understanding of how experiments work. Let’s attempt one of the ACT Science practice questions that asks us about the experimental variables:

ACT Science Tip #3: my recommended ACT Science strategies begin with using the visuals to try to answer all ACT Science questions. However, you could not figure this out by looking at the visual, so you needed to skim. Starting with Experiment 2, since that is what the question is asking about, we skim this,

This is helpful because it tells us acetic acid is one of the solutions in Experiment 2 instead of HCl, but it doesn’t tell us whether it was the titrant or sample solution. However, even without knowing which it is, because acetic acid is only mentioned in answer choices A and C, we can eliminate choices B and D. We also learned that HCl was not used because it says acetic acid was used instead, but this doesn’t help us yet. Since HCl is not used in answer choice A or C. To figure out whether acetic acid is the titrant or sample solution, we must skim the rest of the passage. In the introduction, it had this helpful tidbit:

We now know that titrant means the added solution and sample solution is the solution to which the titrant is added. Now, let’s skim Experiment 1 for more information because we still don’t know the answer.

So, in the original experiment, Experiment 1, NaOH solution was added to HCl solution. According to what we just skimmed and the introduction, this would mean that NaOH is the titrant since it is being added. HCl is the sample solution since the NaOH is being added to it. This is very helpful! We know that in Experiment 2 the same procedure was repeated only using acetic acid instead of HCl. NaOH remains the titrant, and acetic acid replaces HCl as the sample solution. Therefore, the answer is C.

Comparing and Contrasting Experiment Questions are another type of Experimental Design question. As I mentioned earlier, ACT Science passages will often give you multiple experiments or studies in the same passage. They will be labeled Experiment 1 / 2 / 3 or Study 1 / 2 / 3. NOTE: Sometimes there are only 2 experiments/studies, not 3. They'll deal with the same general topic but differ from each other in important ways.

Scientists wanted to study the impact of different types of gas on the mileage of the Toyota Prius Hybrid. In Study 1, each Toyota Prius received a full tank of either unleaded gasoline. The car then drove 100 miles on the highway at 55 mph. The amount of remaining gasoline was measured. In Study 2, the experiment was repeated, but the cars were given premium gasoline instead of unleaded. The amount of remaining gasoline was measured.

Great. Let's break this down. What are the scientists studying here? It's in the first sentence - they want to study the impact of different types of gas on the mileage of the Toyota Prius.

In what ways are the two studies similar? In nearly every way - in both, the cars drove 100 miles on the highway at 55 mph, and they measured the amount of remaining gasoline.

In what ways are the two studies different? This is key - in study 2, the scientist used premium gasoline instead of unleaded. In this way, they changed the experiment a little bit so they could find something new.

ACT Science Tip #4: Real ACT Science passages may not be this easy, but it's the same concept. Some things will remain the same between experiments, but there will always be key differences. Make sure you can figure out these differences.

Why Did They Do X?

This is another type of Experimental Design question, in which you are asked why the scientists decided to make a certain choice in the experimental design. For example:

As we did before, let’s try to figure out what the question is asking us. I don’t know what “tared” means, so I’m going to skim the passage. According to the passage, 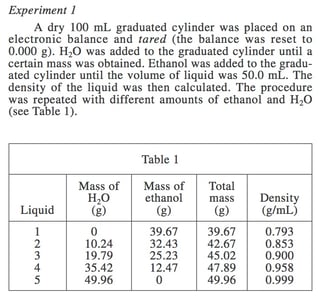 ACT Science Tip #5: In most cases, the answer to this is to make the experiment more robust. Scientists really care about bias or messing up the experiment with unintended side effects. By simplifying the experiment (in this case, by not measuring the cylinder), the scientists can be more certain that their results are accurate.

Hypothetical Changes in the Experiment

Almost all questions of this skill type will ask something like, "Suppose the experiments had been repeated, except instead of _____, the scientists did _____. What would you expect to happen?" Here's a real ACT Science practice question along with the necessary visuals to answer the question:

ACT Science Tip #6: The way to solve these questions remains the same, no matter how complicated the questions get.

There are 2 types of studies:

There are 3 kinds of Experimental Design Questions:

You will also be asked about hypothetical changes to the experiment. The strategy is the same for all four types of questions:

Also, learn about the best way to study and practice for ACT Science.

Like this article? Want to improve your ACT score by 4 points?

Our program is entirely online, and it customizes what you study to your strengths and weaknesses. If you liked this Science lesson, you'll love our program. Along with more detailed lessons, you'll get thousands of practice problems organized by individual skills so you learn most effectively. We'll also give you a step-by-step program to follow so you'll never be confused about what to study next.