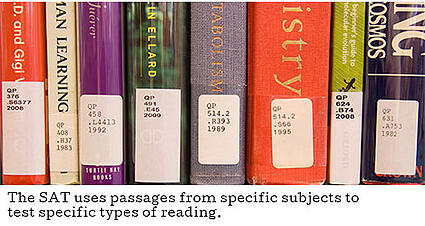 The College Board wants the world to think that the SAT is detached from real-world trivia, a pure test of reasoning and skill. But, of course, this is essentially impossible--hence the scores of SAT prep options out there (of which we are one).

As an attempt at a useful reference buoy in the SAT ocean, this post is an outline of the categories of writing that SAT Reading passages always fall into.

Many students are frustrated by the opacity of many SAT reading passages, torn as they are from any meaningful context. The SAT gives a tiny preface to some of the more arcane passages, but mostly they just throw students in and let them sink or swim.

The best way to prepare for SAT Reading is to do some realistic practice tests, but that might seem like a daunting first step. This article provides a good stepping stone of giving examples of passage types. We hope some students out there find this useful; the high school-to-college transition is a stressful time, and we’re in the business of making it less so.

So, without further ado, the main types of passages you’ll see on the SAT Reading section. To give you a feel for each type of passage, we’re going to include a snippet from each that represents the typical style of that passage type.

Okay, one bit of further ado: the categories are listed in order of frequency on the test. Now let’s go.

Since the SAT is supposed to test students’ readiness for college-level academic work, the College Board loves passages like this.

We know that adult language is intricately complex, and we know that children become adults. Therefore something in the child's mind must be capable of attaining that complexity. Any theory that posits too little innate structure, so that its hypothetical child ends up speaking something less than a real language, must be false.

It was disturbing to me to see anyone so facilely blur the distinction between observations and interpretations and then even go so far as to make numerous deductions without the slightest shred of evidence. When I was very young and did not "see" what seemed obvious to adults, I often thought I was stupid and unsuited for science. Now I sometimes wonder if that is why I make progress. I see the ability to invent interconnections as no advantage whatsoever where the discovery of truth is the objective.

History passages give the SAT a chance to test your understanding of specific meaningful events or evolution of ideas over long periods of time. These are situations in which outside knowledge is (a) most likely to occur, especially for students in AP History courses, and (b) most detrimental: remember, only draw your answers from the material on the page.

Topic: The evolution of the meaning of bohemianism

In 1843 when Michael William Balfe's once famous opera The Bohemian Girl premiered in London this meaning was still widely current. A Bohemian had come to mean any wandering or vagabond soul, who need not have been associated with the arts. It was the malnourished Parisian poet, Henry Murger, who was responsible for clinching the term's special association with the life of artists.

The report of a supernatural visitant sent by God to save France, which inspired the French, clouded the minds and froze the energies of the English. The sense of awe, and even of fear, robbed them of their assurance. Upon Joan's invocation the spirit of victory changed sides, and the French began an offensive that never rested until the English invaders were driven out of France.

This and the categories below point more squarely at liberal arts topics, but mostly maintain the neutrality and of the Science and History passage types.

The rationale for breeding endangered animals in zoos is nevertheless compelling. Once a species falls below a certain number, it is beset by inbreeding and other processes that nudge it closer and closer to extinction. If the animal also faces the wholesale destruction of its habitat, its one hope for survival lies in being transplanted to some haven of safety, usually a cage. In serving as trusts for rare fauna, zoos have committed millions of dollars to caring for animals. Many zoo managers have given great consideration to the psychological health of the animals in their care.

Topic: An American’s visit to Paris in the 1960s

The architectural space of Paris is an astonishment to me because its scale so accurately attunes inhabited earth to sky that I can actually walk in a work of art. I feel in some subtle way eased. I find myself in a world ordered by people of like mind to my own, in a companionship rendered visible. As if for the first time in my life I could be content to be human without having to forego, because of that limitation, my intuition of divine order.

These are slightly less common than the above categories, but they’re still worth mentioning. They’re written much like other discussions of art or literature, and so a great way to prepare (and learn some good vocabulary) is to read some high-quality art and literature reviews, which have their own style and language that extends to the SAT Reading passages.

Topic: Vermeer’s The Girl with the Pearl Earring

Snow describes the girl’s gaze as a stew of unresolved contradictions, which only leaves the captivated viewer all the more guilty and confused. Surprise, bewilderment, yearning, acceptance, understanding--in sequence, or all at once--her glance seems to convey all of these. “Suddenly, the most personal responses, drawn from the most private, well-protected regions of the self, are required.”

Passages from this category show up less frequently on the SAT (thus, only one sample) and have a slightly different feel: they’re difficult not because of scientific terminology or historical references, but mainly because of antiquated language and totally unfamiliar subject matter (e.g. the descriptions below, or a character’s concerns about her upcoming marriage).

Source: An old-timey novel about a ship

The youngest man on board (barring the second mate), and untried as yet by a position of the fullest responsibility, I was willing to take the adequacy of others for granted. They simply had to be equal to their tasks; but I wondered how far I should turn out faithful to that ideal conception of one’s own personality every man sets up for himself secretly.

Overall, SAT Reading passages should be similar to some of the material in your high school textbooks. If you’re curious about how the SAT relates to high school academics, see this blog post about the correlation between achievement in the two areas.

Also, don’t be surprised if you see passages that combine two of the above passage types: the essay about evolution and captive breeding, for example, is also a personal narrative.

Ready to take the next step and dive into the wonderful world of SAT Reading? Start by reading our guide on how to get a perfect score on SAT Reading--it's chock-full of great advice.

Like what you read? Get our FREE EBOOK Guide: