1920s Fashion: From Flappers to the Little Black Dress 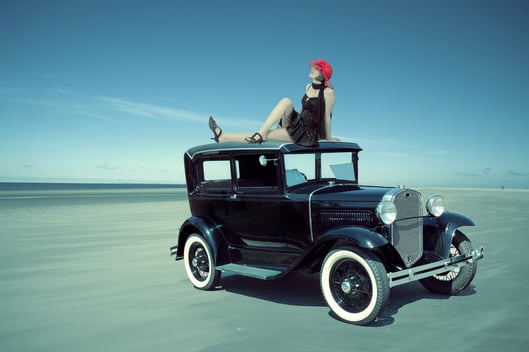 The roaring twenties were an iconic era, characterized by a post-war economic boom, the rise of the newly wealthy, and monumental cultural shifts that would continue to define art, politics, and fashion for decades to come. 1920s fashion was all about creating a Look — an overall aesthetic that used modern trends to demonstrate the wearer’s creativity. For the first time, fashion was about self-expression, and you could be anyone you wanted if you had the right clothes.

After World War I ended in 1918, the world pieced itself back together, and people tried to make sense of the events that occurred. As the world changed and healed, people pushed rapidly toward modernization in women’s rights, technology, and culture. The roaring twenties was a decade in which everything changed, and thankfully, gave us one of the most fun and influential decades of fashion.

Fashion for women underwent major changes in the 1920s, as styles moved away from strict Victorian dress codes. Hemlines went up, and necklines went down. Women wore loose-fitting clothes, which allowed them the opportunity to show more skin, and move more freely. Corsets were discarded for loose-fitting chemises and camisoles, and with their new freedom of movement women dove headfirst into experiencing and defining their liberation in the modern era.

The Flapper is the look most commonly associated with the roaring twenties. Flappers wore short, tube-like dresses that could be plain or adorned with beads, fringe, or geometric shapes in an art-deco style. Flappers also accessorized with long necklaces, usually pearls, as well as scarves and headscarves, and galoshes. The Flapper look was intended to be an over-exaggerated, attention-grabbing look. Young women were experiencing more freedom in the post-war 1920s, and sought to shake the rigid expectations for women in past decades. 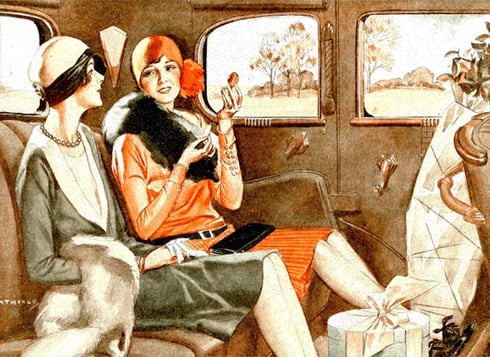 Similar to the Flapper, women who sported a Garconne look did so to rebel against feminine norms. This look was intended to be masculine; the essential pieces were blouses, oversized jackets, and straight-legged trousers. The look allowed for freedom of movement, and was a way to signal that a woman was independent and professional. Coco Chanel, who emerged as a leading fashion designer during the decade, was a proponent of the Garconne look, often wearing suits she designed.

Speaking of Coco Chanel- this fashion icon also designed The Little Black Dress in the 1920s, a staple wardrobe piece that was intended to be stylish and multi-functional staple wardrobe piece for women of all shapes. The concept of a multi-functional dress was so popular that women all over the world adopted it, and it remains a fashion must-have.

1920s hairstyles for women moved away from complicated long curls and pinned updos. Women chose short, sleek bobs of varying styles, including the Shingle, a shorter, waved bob. Fur coats or fur trim coats were also popular at this time, particularly raccoon, and were a major marker of status. Low heels in Mary Jane or T-strap styles were worn with most outfits.

In addition to the two main day looks, other aspects of women’s clothing evolved during this time, since more women had the means to take vacations and participate in leisure activities. Women’s “bathing costumes” became shorter and tighter, allowing for more range of moment in the water, and more skin to be shown while sunbathing- a scandalous development! Sportswear also became more functional; loose trousers and blouses became acceptable for women, as women began to participate in leisure sports alongside men.

Men continued to wear suits for everyday wear, but new pieces became socially acceptable in casual settings as well. Sweaters were popularized as more young people went to college, and men wore them with trousers or knickerbockers. The suits themselves became less formal; pants were fitted more loosely, and a vest was optional. The 1920s also brought the creation of a Zoot Suit, which were popular among African-American men. These suits had wide legs and shoulders, and were styled with colorful ties and pocket squares.

Though we tend to think of a tuxedo now as the highest level of formal wear, tuxedos were only adopted in the 1920s. Previously, men’s formal wear was called “white-tie” and consisted of a white tie and vest, along with a coat and tails. The more comfortable tuxedo replaced the coat-and-tails, and is now what we call black-tie formal. Tuxedos enabled men to dance more freely, as dancing itself became more varied and active. 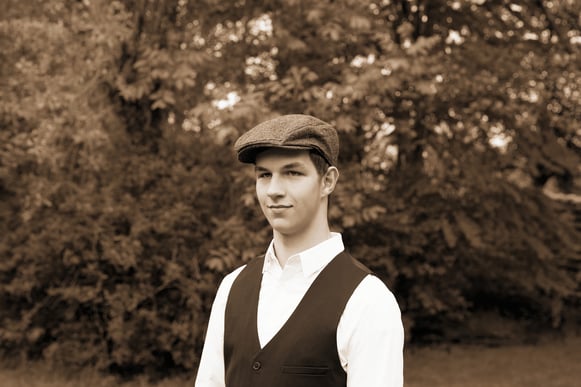 1920s Hairstyles and Accessories for Men

You can’t think of 1920s fashion without thinking about hats. From flat-caps to top hats, men’s hats were essential. It was not generally acceptable to leave the house without one. Flat-caps were the most casual, and were often worn by boys and young men. Fedoras were also worn casually, usually with a suit. Top hats were considered formal hat-wear.

Men’s hair was short and slicked back, emulating the gangsters and movie stars who were the celebrities of the day. Men also rocked ties and bow ties, and matched them with pocket squares, which were used as a way to add color and dimension to their outfits. Men in the 1920s also favored black wing tip, patent leather, or two-tone shoes. Like for women, fur coats were a signifier of status, with raccoon coats being sought after for their pattern and color.

First-wave feminism in the United States gained women the right to vote in 1919. With the vote came a change in women’s status, which was reflected quite literally in their clothing. As we mentioned above, corsets were all but abandoned, and clothing became less about following strict social codes to signify virtue or marital status, and more about self-expression. Women’s fashion was one of the primary functions of the culture revolution that came to define their liberation and the roaring twenties.

The growing economy in conjunction with technological advancement and an increase in overall wealth created a growing culture of consumerism, where people were eager to display their wealth and status; part of this display was the cultivation of a look, and an understanding of trends. Accessing fashion was, for the first time, available to people of all classes, and there was a power in self-expression for the newly rich and the rising middle class.

Additionally, many young men and women left their hometowns for the city with promises of jobs and adventure. A youth culture defined by unlimited promise quickly arose.

The film industry was just beginning en masse in the 1920s, and people of all socioeconomic status could go to see motion pictures. Movie stars like Clara Bow, Greta Garbo, Rudolph Valentino, and Buster Keaton heavily influenced the styles of the day. Hollywood as considered the height of glamour, and movie stars were a new concept that people were eager to emulate in the hedonistic twenties

These changes accompanied by newspaper syndicates allowed people to all access the same information- for the first time, people in cities and rural towns across the country were reading and seeing the same content as one another. Newspapers ran the same stories, people saw the same movies, and were able to participate in national culture. This especially was important as the media glamorized prohibition gangsters’ rise to prominence. Their lifestyle and culture began to influence fashion and a culture of excess.

Modern art also influenced 1920s fashion. Like everyone else, artists were trying to make sense of the devastating war in their own ways, which led to movements like Dada, surrealism and expressionism. Art deco was a major influence on fashion, as it focused on shapes and dimension and was about creating a visual experience. The influences are evident in the Flapper and Garconne looks for women, with its emphasis on lines and shapes. 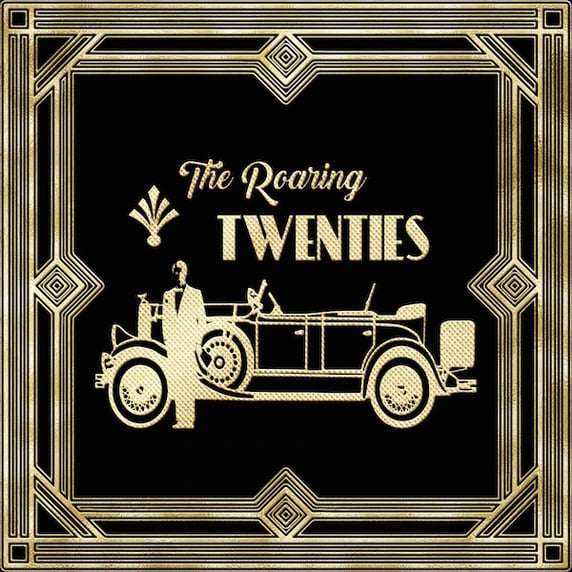 An example of art-deco

In addition to the everlasting addition of the Little Black Dress, 1920s fashion influences continue to define the fashion industry as we know it.

Fashion of the 1920s was closely tied to women’s liberation, and was one of the first of many movements to make women’s fashion more comfortable, functional, and suited to their needs and creativity instead of their physical attractiveness.

More importantly, the 1920s established fashion as an ever-changing part of our cultural lexicon, something that influences people all over the world.

A common expression is that fashion is cyclical, which explains why certain styles like leggings have made their way back from the 1980s in recent years. With that said, the fashion influence of the 1920s is everywhere, from a recent rise in bright shapes and patterns, and the resurgence of loose-fitting pants and blazers.

Here are some fun ways to channel the 1920s in your everyday outfits, while avoiding looking like you’re wearing a costume.

Remember, 1920s fashion for both men and women was about creating a Look, and using clothes to express yourself. When using the 1920s as an inspiration, the most important thing to keep in mind is that 20s fashion is about self-expression and freedom. It’s incredibly fun to turn your body into a work of art that speaks for itself.

Looking for more about the 1920s? Check out some of our analyses of one of the most iconic 1920s books, The Great Gatsby. Read an in-depth guide of the era or analyze the roles of money and materialism or the American dream in the novel.

The 1920s are only a small part of US history, and you'll need to know all about the 20th century and beyond. This study guide for the the AP US History test will help expand your knowledge and prepare you for the test.