Trouble Sleeping? Learn How Long Caffeine Stays in Your System 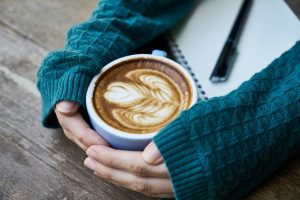 In this quick guide, we'll go over how long caffeine stays in the average person's body, what factors impact how long you'll feel the effects of caffeine, and what you can do to combat the caffeine jitters. Ultimately, we'll help you answer the key question: how long does caffeine stay in your body?

How Long Does Caffeine Stay in Your Body? The Average Person

Caffeine is absorbed by the membranes of your body incredibly quickly. Once you take in caffeine, you'll feel its full effects within 15-45 minutes. After that, your liver will start breaking down the caffeine into caffeine metabolites, which you will eventually excrete in urine.

In the average adult, the half-life of caffeine is about 5-6 hours. This means that once take a dose of caffeine, you'll break down about half of that caffeine after 5-6 hours. So if you take in 200 mg of caffeine at 9 am, you'll still have about 100 mg left in your body between 2 and 3 pm.

How Long Does Caffeine Affect You Specifically?

So now you know that the average person experiences a caffeine half-life of about 5-6 hours. But how long after drinking that cup of coffee or downing that Mountain Dew will you still be feeling a buzz? How long does caffeine stay in your body in particular? That depends on a few factors.

Caffeine is processed and broken down by a set of enzymes in the liver. How much of that enzyme you produce is determined by genetics. This means that some people metabolize (or break down) caffeine extra-slowly, and some people break it down so quickly they barely feel the stimulating effects of caffeine.

The only way to really know how you metabolize caffeine is to have some and see what happens. If you are hypersensitive to caffeine, even small doses (think half a cup of coffee) may give you the "coffee jitters"—which can include feelings of anxiety, restlessness, nausea, diarrhea, heart palpitations, and general discomfort. If you are hyposensitive, you won't feel much of a stimulating effect from caffeine at a normal dose, even if you've never had it before.

Note also that pregnant women metabolize caffeine much more slowly, with an average caffeine half-life of up to eight hours.

The more often you consume caffeine, the more tolerant you become to its effects. Regular coffee drinkers need to drink more and more coffee over time to get the same stimulating effects from caffeine that they did initially. If you're a new coffee drinker, expect to feel the impact of caffeine much more strongly than if you're a coffee veteran. (If you are a big coffee drinker, keep in mind that super-high caffeine doses are toxic. Try to moderate your intake so that you aren't constantly taking bigger and bigger doses.)

Other Drugs You Take

Other substances that you take into your body can impact how you metabolize caffeine and change the half-life of caffeine in your own body. For example, hormonal birth control can slow down how quickly you process caffeine, making you more sensitive to its effects. By contrast, regular smokers have a caffeine half-life of about three hours, making them less sensitive to the effects of caffeine.

Other drugs can also impact how you process caffeine, so look up how caffeine interacts with any prescription drugs or other substances you are taking.

Can You Speed Up the Half-Life of Caffeine?

Feeling the caffeine jitters? Are you anxious, panicked, or nauseated? Can you speed up your body's processing of caffeine to make yourself feel better?

In short, not really. There's not actually a reliable way to speed up the processing of caffeine in your liver in the short-term. However, here are some things you can do to help you feel better while you process the caffeine:

Drinking water won't "flush" your system of caffeine, in spite of the commonsense wisdom. However, caffeine is a diuretic, which means that it can cause dehydration. Drinking plenty of water will help minimize dehydration and help alleviate some of the symptomatic effects of the caffeine jitters.

Caffeine can suppress your appetite, so you may feel the impacts of low blood sugar, including nausea and headache, if you don't make a conscious effort to eat. Taking your caffeine with a meal will also slow down your processing of caffeine, which will make you less likely to have the jitters.

While exercise won't make you metabolize caffeine any faster, it will help you to burn off some of the extra energy caused by caffeine's adrenaline release. This may help you feel better.

Bottom Line: How Long Does Caffeine Stay in Your System?

There's no way to actually process caffeine any faster in the short-term. But if you've had too much and you're uncomfortable, these things might help you feel better: