January babies and the people who love them, get ready to learn about one of the oldest and diverse birthstones around: the garnet. This January birthstone has more than 20 different varieties, has been found on every continent, and has a history dating back thousands of years.

Read on to learn everything you need to know about garnets, from the rainbow of colors they come in, to what they signify, and fun facts about this gemstone.

What Color Are Garnets?

What is the January birthstone color? The most common and well-known color for garnets is a dark red. Under some dim lighting conditions, the garnet stone is such a dark color it can look almost black. However, in well-lit areas, the deep red color of the garnet will become clear as the stone sparkles in the light.

Red garnets are the most common, but garnets can be found in a wide range of colors including oranges, purplish and pinkish reds, yellows, blues, and greens. Green garnets, known as either demantoid or tsavorite garnets depending on their composition, are a particularly rare and valuable form of the gem. Blue garnets, also very rare, have the ability to alter the appearance of their color. In natural light, they appear blue-green, but this changes to purple under artificial lighting. 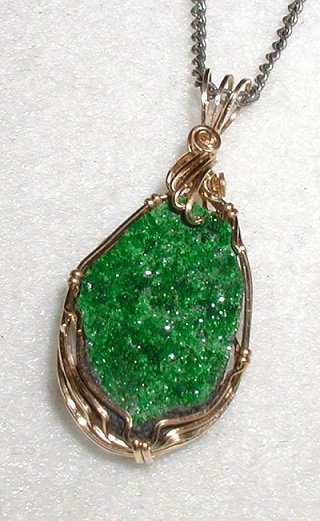 A green garnet set in a necklace.

What Do Garnets Signify?

Garnets symbolize friendship and trust, and they are a great gift to give to someone who has been a loyal friend. Additionally, garnets also symbolize a separated love and hope for a quick return.

The reason for this comes from a Greek myth where the god Hades gave the goddess Persephone a pomegranate when she left him to ensure her quick return. Garnets are often associated with pomegranates because the name garnet comes from the Greek phrase “pomum granatum” which means pomegranate seed. And it’s true, small garnets do resemble the dark red seeds of a pomegranate!

In addition to being the birthstone for January, garnets are the gemstone traditionally given on 2nd wedding anniversaries, and they are also the state mineral of Connecticut and the state gemstone of New York. The star garnet, a rare variety which appears to have a star shape in the center when cut, is the state gemstone of Idaho.

Where Are Garnets Found?

Garnets are one of the most widespread gems, and they have been found in many regions around the world, including Russia, the Czech Republic, Afghanistan, Tanzania, India, Thailand, the USA, and Brazil. Today, the highest-quality garnets are found in East Africa, particularly Tanzania and Kenya.

In the 1990s, a deposit of rare blue garnets was discovered in Madagascar. To date, this is the only place on Earth where blue garnets have been found. Wouldn't that be a great January birthstone gift!

During the 19th and 20th centuries, green garnets were thought to exist almost exclusively in Russia’s Ural mountains, but since the 1970s deposits have been found in Tanzania, Namibia, Kenya, and, to a smaller extent, Pakistan and Antarctica.

Garnets are often found near the Earth’s surface, usually within pebbles in riverbeds or deposited on beaches. They can be found within metamorphic, igneous, or sedimentary rocks, although metamorphic deposits are the most common and where nearly all red garnets are found. 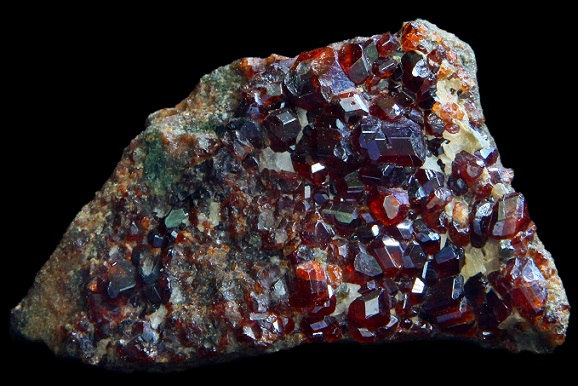 A deposit of garnets that have yet to be cut and polished.

A Brief History of Garnets

For thousands of years, people across the world have admired and coveted garnets, whether because they believed the stones had special powers or just for their beauty. Some of the oldest garnets have been found in Egyptian tombs, as part of necklaces created over 5,000 years ago to decorate the bodies of pharaohs.

In ancient Roman times, garnets were highly prized and frequently used to decorate sword hilts and gold jewelry. During this time, garnets became a widely-traded gem and the most popular gemstone in the ancient Roman world. In the Middle Ages, garnets were a favored gemstone of both clergy and the nobility. A large deposit of garnets discovered in Bohemia (now the Czech Republic), helped garnets become more popular and spread throughout Europe. Garnets reached their highest peak of popularity in the late 1800s when they were one of the most fashionable gemstones to purchase and wear.

The rare and valuable green demantoid garnets were prized by Russian czars, and the famed Russian jeweler Gustav Fabergé (known for his jeweled eggs) often used them in his work. During the Victorian Era, jewelry with melanite garnets, garnets with an opaque black color, were especially popular in Europe.

Garnets are now a popular gemstone throughout the world, prized for their rich hues and rainbow of colors. In addition to being used as a gemstone, garnets’ high abrasiveness makes them useful for industrial purposes, such as sandblasting and water filtration. In fact, the majority of garnets harvested today are used for industrial purposes. Only the highest-quality stones are used for jewelry and other decorative uses. 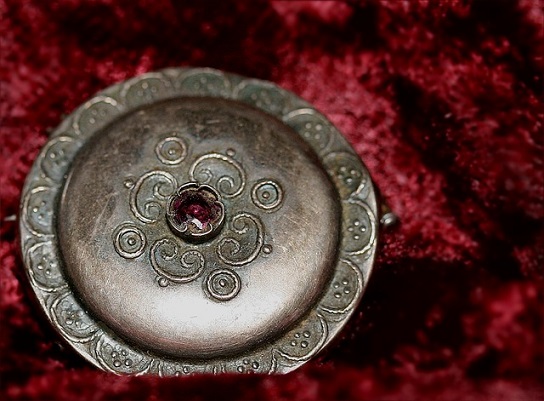 An antique brooch featuring a garnet in the center.

Looking to buy a January birthstone for a lucky someone? Garnets can be cut to almost any size and shape, so they are used in many types of jewelry, including rings, bracelets, earrings, and necklaces. They are often set in gold to highlight the deep red color most commonly found in garnets.

Garnets have a high hardness and refractive index, which means they are both brilliant and difficult to damage. This makes them durable and eye-catching stones to use in jewelry. 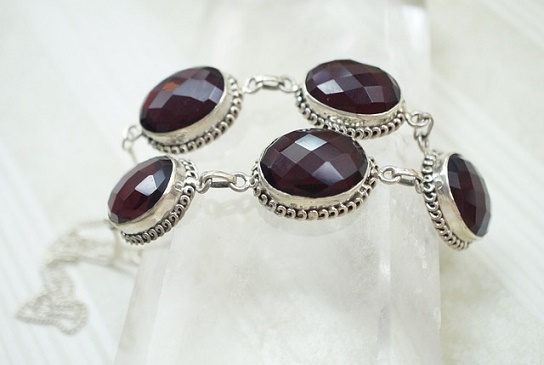 A garnet bracelet that shows off the dark color of the stones.

Interesting Facts About the January Birthstone

Want to learn more about other precious stones? Our article on 11 blue gemstones will scratch that itch for you.