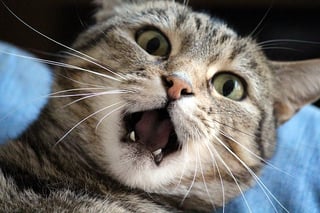 With the launch of the redesigned SAT in March of 2016, a new era was born in standardized testing. While the College Board was hopeful that there would be no issues with the new test or its familiar scoring system (maximum score of 800 per section), unfortunately there have been scoring issues that are confusing and upsetting students. Furthermore, the College Board has managed to irk its arch nemesis, the ACT.

In this article, I’ll break down these controversies and explain what they mean for you.

The New Scores Are Inflated

The biggest issue with the new scores seems to be that scores on the redesigned SAT are slightly higher compared to those from the old SAT. For example, a 1300 on the new SAT corresponds to a 1230 on the Math and Critical Reading sections of the old test. A 730 on the new Math section is equivalent to a 700 on the old one.

Here’s a chart comparing the old combined SAT scores to the new ones. New SAT scores were multiplied by 3/2, so all scores could be out of 2400. Basically, this chart reveals what the new SAT scores equate to on the same scale as the old SAT. 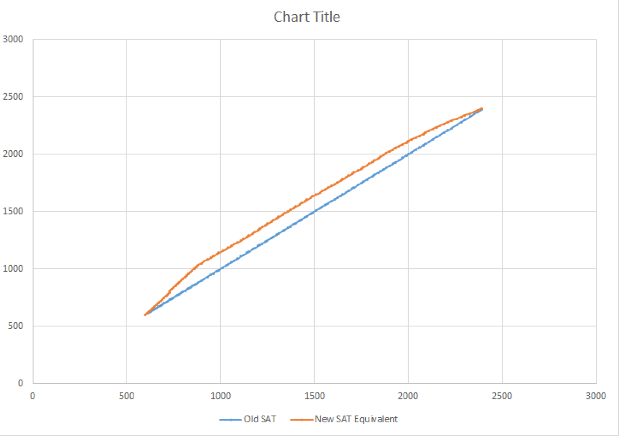 At almost every point along the curve, the new SAT score is roughly 80 points higher than you would expect from the old SAT. After students got back their scores from the first administration of the new SAT, many were very happy with their scores until they learned that their scores were not as good as they thought. 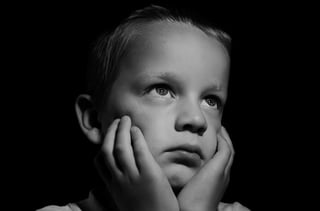 His score wasn't as good as he thought.

Why Are the Scores Higher?

We believe that the scores on the new test are higher because of the elimination of the penalty for wrong answers. The College Board didn’t compensate for the higher raw scores that inevitably result from no guessing penalty and one fewer answer choice.

For example, from the chart you'll be able to see that getting 40% of right answers on the new and old SAT would get you a score of a little less than 500. 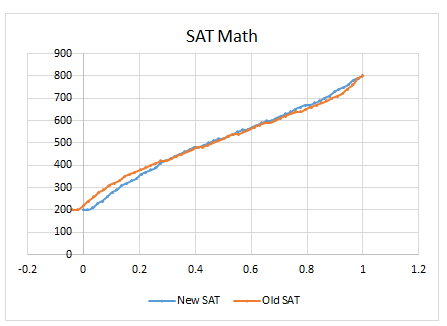 However, because there’s no penalty for guessing and one fewer answer choice, students will get a greater percentage of questions right on the new test, if the tests are equally difficult. Most likely, this was a deliberate decision by the College Board. But why?

There are a few possible reasons. The College Board may have wanted scores to be higher to raise satisfaction with the test. The redesign was motivated in part because the SAT was losing market share to the ACT. If students start to get higher scores on the SAT, that could motivate more students to opt to take the SAT vs. the ACT.

Also, more states are adopting the SAT as a mandatory state test. Because all students in certain states will be taking the SAT as opposed to just college-bound students, scores from the old test and new test may become more equal over time. 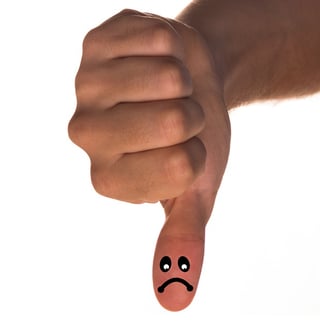 Are the Concordance Tables Accurate?

The CEO of the ACT, Marten Roorda, claimed that because the College Board didn’t collaborate with ACT on the table that the College Board’s table can’t be accurate. Furthermore, he stated that these tables are likely not to be accurate because they were released after only one test, and the old tables were created after a year’s worth of tests.

Roorda argued that there can’t be accurate percentile scores on the new SAT because there had only been one administration of the test when the tables were released, and the students who took the first test may not be representative of students as a whole. He claimed that a year’s worth of tests and data was needed before the College Board could effectively equipercentile.

He also said that they had reached out to ACT to collaborate on the new concordance tables and that the College Board looks forward to working with ACT in the future.

What Do These Controversies Mean for You?

The squabbles between the ACT and the College Board won’t have much impact on you, but you should be aware that the new SAT scores are slightly inflated. Because there’s no better alternative, college admissions officers will likely use the College Board’s concordance tables, and you should do the same.

If you  take the SAT and the ACT, or if you’ve taken the old SAT and new SAT, you should send your best scores based on the concordance tables to colleges, if you have the option of selecting which scores to send.

Also, if you’re trying to determine your target score for the SAT, use the concordance tables to convert old SAT scores to new ones. Colleges haven’t released their standardized test scores for the new SAT yet. We recommend that you strive to get a 75th percentile score for any college you want to attend. Use the concordance table to convert a school’s 75th percentile score on the old test to an equivalent score on the new one.

Are you planning on taking the new SAT? Find out what students who've taken the test thought about it.

Did you know the essay on the new SAT is optional? Learn if you should take the essay.

Did you get a high score on the old SAT? Read this post to find out if you should take the new SAT.

Disappointed with your scores? Want to improve your SAT score by 160 points? We've written a guide about the top 5 strategies you must be using to have a shot at improving your score. Download it for free now: