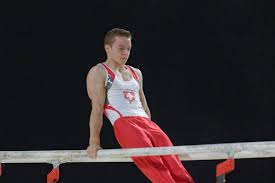 So, let’s master another rule and boost your SAT Writing score with these tips and strategies.

What is Parallelism as a Grammar Rule?

Parallel structure means using the same pattern of words for two or more words or ideas in a sentence. Using parallel structure shows that the words/ideas have the same level of importance and makes the sentence easier to understand.

The sentence is listing three things that Egya likes. The first two are in the gerund form. Gerunds are verbs that function like nouns and end in "ing". The last thing, "to write", is an infinitive. An infinitive is also a verb that functions like a noun, but it is constructed by using the word "to" plus the verb. In order to make this list parallel, all three items should be in the same grammatical form. The corrected version of the sentence looks like this:

Now all three items on the list are gerunds. So, how is parallel structure tested on the SAT Writing section?

Parallel Structure on the SAT

There are two primary types of parallel structure questions that appear in SAT Writing.

Sonia is known for her independence, her honesty, and being intelligent.

Do you see the inconsistency in the list? The first two items are nouns, traits that Sonia possesses. In the last item, "being intelligent", the word "being" is a gerund and "intelligent" is an adjective that describes Sonia. We want all three items in the list to have the same construction. After we fix the parallel structure error, this is our sentence:

Sonia is known for her independence, her honesty, and her intelligence. 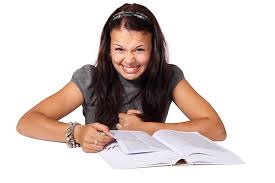 Now all the items in the list match. The sentence reads better and all is well in the world of parallel structure.

Break down each item in the list by identifying the parts of speech of the words and make sure that all the items match. We want each item to be in the same grammatical form. After breaking down the list items, there should be no inconsistencies. Once we fixed our previous example sentence, the items in the list included "independence" (noun), "honesty" (noun), and "intelligence" (noun).

Let's move on to the second type of parallel structure question.

Definition of a Conjunction

Conjunctions are words that connect phrases or clauses. Examples of common conjunctions include and, or, but, and so. Some of you may be familiar with the acronym FANBOYS. It stands for For, And, Nor, But, Or, Yet, So. Those are all conjunctions.

Now that we know the rule and the definition of a conjunction, we can check out how this rule should be applied. Here is a sentence with a parallel structure error:

The SAT Writing section challenges students and frustration is found in them.

So, the two items are connected by the conjunction "and". Let's break down each item by its parts of speech. The first item, "challenges students" is VERB + NOUN .

The second item that follows the conjunction is "frustration is found in them". That phrase's construction is NOUN + VERB + ADJECTIVE + PREPOSITION + PRONOUN. Even if you struggle identifying the parts of speech of certain words, you should be able to immediately recognize that the phrases are not consistent and the sentence has a parallel structure error.

So, how do we correct the sentence? We change the wording in the phrase following "and" to match the VERB + NOUN construction of the first phrase. This is the corrected version of the sentence:

The SAT Writing section challenges students and frustrates them.

Do you see that the phrases appear more consistent and the sentence reads better after we fix the error? Also, note that it's fine to use a pronoun in the place of a noun as long as the pronoun has a clear antecedent.

Let's go through the same process with another example:

Rand Paul supports the repeal of the Affordable Care Act as well as that the Department of Education should be eliminated.

The two items in the sentence are the two things that Rand Paul supports. Both items are connected by the conjunction "as well as".

Rand Paul supports the repeal of the Affordable Care Act as well as the elimination of the Department of Education.

Much better, right???? So, phrase #2 should now match the NOUN + PREPOSITION + NOUN construction of phrase #1. Let's see if it does. Elimination=NOUN, of=PREPOSITION, Department of Education=NOUN. Boom!! 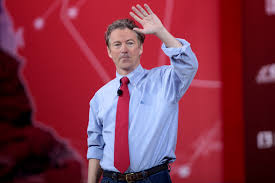 If you see a conjunction connecting/comparing two items, identify the items. Then, break down the words in each item by their parts of speech and determine the phrase's construction.

Make sure that the phrases are parallel. The construction of the phrases should match as closely as possible. Also, a preposition used on one side of a conjunction or word pair must appear on the other side. Look at this example with a parallel structure error.

The dancer was praised not only for her strength but also in her agility.

The dancer was praised for two things. Those things are connected by the word pair "not only...but also". The two things, which are the phrases before and after "but also", should be parallel in construction. The prepositions should match for the sentences to be parallel. This is the corrected version of the sentence:

The dancer was praised not only for her strength but also for her agility.

See if you can identify an error in parallel structure in this first example.

Explanation: First, we notice that there is no grammatical error within the underlined phrase. Now, let's look at the phrase's function within the sentence. The phrase "and composing one original work" is one of three things that a student must present to complete the music program. Therefore, the phrase is part of a list and should be parallel in structure to the other two items in the list.  The construction of the first two items is "ONE" + ADJECTIVE + NOUN. We want the last item in the list to match the other two items as closely as possible. So, what's the answer? The answer is B. The phrase "and one original composition" matches the construction of "ONE" + ADJECTIVE + NOUN. Answer choice C doesn't work because the word "with" is incorrect given the context of the sentence. Remember the basic list construction of x, y, and z.

Here's another real SAT example for you. 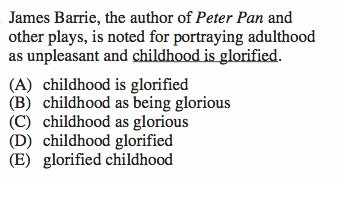 Explanation: Again, there is nothing grammatically incorrect within the phrase "childhood is glorified". What is the function of that phrase within the sentence? The phrase is one of two things James Barrie is noted for portraying. The two things are connected by the conjunction "and". The first thing he is noted for portraying is "adulthood as unpleasant". What is the construction of that phrase? Its construction is NOUN + "AS" + ADJECTIVE. We want the construction of the second phrase to mirror that of the first. The answer is C. The phrase "childhood as glorious" perfectly matches the construction of NOUN + "AS" + ADJECTIVE and fixes the error in parallel structure.

Check out this example of an identify the error parallel structure question. 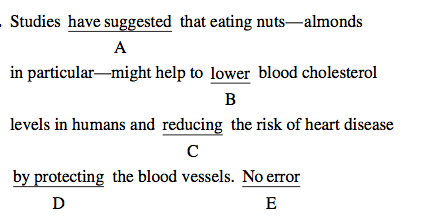 Explanation: Hopefully, you identified the conjunction "and" within the sentence. What is "and" connecting in the sentence? It is connecting two things that eating nuts might help. The first thing it might help is "to lower blood cholesterol levels in humans". The basic construction of that phrase is INFINITIVE + NOUN + PREPOSITIONAL PHRASE.  The second thing that eating nuts might help is "reducing the risk of heart disease". Let's break down that phrase by parts of speech. That phrase's construction is GERUND + NOUN + PREPOSITIONAL PHRASE. We know that the infinitive form is correct in the first phrase because the word "to" isn't underlined. Therefore, the word "reducing" should be changed to the infinitive form to fix the error in parallel structure. The answer is C. "Reducing" should be changed to "reduce". The "to" is implied from "to lower".

Here are some tips for you to use to help you correctly answer any parallel structure question you may encounter on the SAT Writing section. 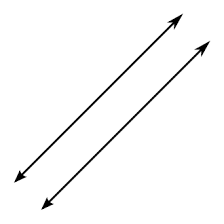 #1: Any List Within A Sentence Indicates a Possible Error in Parallel Structure

If you see the x, y, and z list construction, make sure that the items in the list have the same grammatical form.

#2: Phrases Connected by Conjunctions May Indicate an Error in Parallel Structure

#3: Break Down the Construction of Phrases Separated by Conjunctions and Items in a List

Now we can apply the lessons we've learned.

1. I like my PrepScholar articles because not only are they informative and entertaining but also because they offer students help.

A. they offer students help.

B. they offers students help.

C. they are helpful for students.

D. they are helping students.

E. their offering to help students.

2. Because I was hungry, tired, and feeling like I was sad, I did not want to go to my appointment.

C. I had feelings of sadness,

3. Stand-up comedy, one of the least respected performing arts, is valuable to society because the performer is able to inform the audience and making it laugh uncontrollably.

A. making it laugh uncontrollably.

B. making them laugh uncontrollably.

C. uncontrollable laughter is caused by him.

4. Exercising (A) enabled Joe to strengthen his (B) muscles and releasing (C) his stress. (D) No Error (E)

If you want an overview of the topics on the SAT Writing section, read this article about what's tested on SAT Writing. If, specifically, you want to know the grammar rules tested in SAT Writing, check out this guide to SAT grammar.

Since I know many of you have lofty goals and aspirations, I assume you may be interested in knowing what to do to get a perfect score on the SAT Writing section.