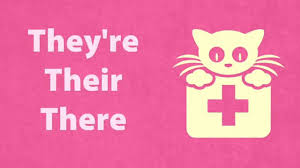 The SAT Writing section has questions about possessive nouns and pronouns. In this article, I'll provide you with all the rules and strategies to correctly answer these questions.

Possessives on the SAT

Possessives indicate ownership. Here are some example sentences with the possessives underlined:

The students’ behavior was unacceptable.

Their voices should be heard.

If a word is singular or if it’s plural but it doesn’t end in “s,” then you add an apostrophe and then an "s" to the end of the word.

The giraffe’s neck is really long.

The children’s playground has monkey bars.

To create a possessive for a plural word that does end in “s,” just place the apostrophe after the “s.”

I saw a dance troupe perform last night, and I was impressed with the dancers’ skills.

On the SAT Writing section, the questions on possessive nouns are about determining whether an apostrophe is needed, and if so, whether the possessive is singular or plural.

Should a Noun Be Possessive?

To determine if a noun should be possessive, take the noun, put an “of” in front of it, and stick it after the noun or phrase that follows it. Here’s an example:

The schools code of conduct is very strict.

Here’s how you change the sentence to determine if “school” should be possessive:

The code of conduct of the school is very strict.

Does that make sense? Yes. The sentence is referring to the code of conduct belonging to the school; therefore, “school” should be possessive. This is the corrected sentence:

The school’s code of conduct is very strict.

Is the sentence describing "yesterday of the song?" No. That doesn't make much sense. The sentence is just using the plural form of the word “song” because there was more than one song downloaded. Because the noun isn’t being used as a possessive, there shouldn’t be an apostrophe.

Should the Possessive Noun Be Plural or Singular?

Every contestant’s goal was to win the grand prize.

Check out another example:

All of the contestants’ buzzers weren’t working.

“All” implies more than one; therefore, we should use a plural possessive and the apostrophe should come after the “s.”

The SAT will test you on the issues we just discussed. Use your knowledge of possessive nouns to answer these questions. 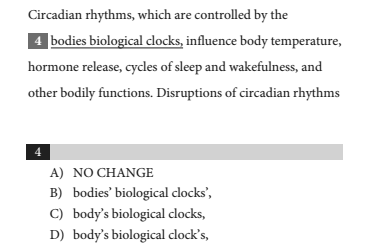 Now we have to determine whether “bodies” should be a noun or a possessive. Let’s try the replacement method. Is the sentence stating that circadian rhythms are controlled by the "biological clocks of the body?" Yes. The sentence is indicating possession and “bodies” should be in the possessive form. The correct answer is C. The sentence is referring to the body in general and not multiple bodies, so we use the singular possessive form. 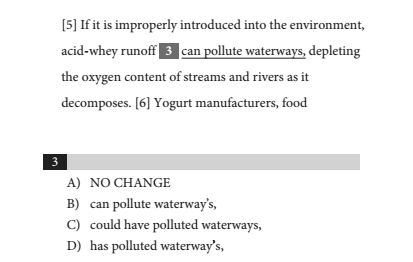 From the answer choices, we know we have to determine whether “waterways” should be a possessive or a plural noun. Again, let's use the replacement method. Is the sentence describing something of the waterways or referring to more than one waterway? It should be a plural noun without an apostrophe because the sentence is stating that acid-whey runoff can pollute waterways. There is nothing indicating possession. Therefore, we can eliminate B and D.

These are the most common type of possessive pronoun questions. Homophones are words that sound the same but have different meanings. Typically, you’ll have to choose whether to use “there,” “they’re,” or “their.” Or you’ll have to choose between “its” and “it’s.” Here is a table showing these common homophones and how they're used.


Check out these example sentences that demonstrate how these words are used:

Incorrect: The girls said mean things. There statements were unkind.

Correct: The girls said mean things. Their statements were unkind.

In this sentence, we can determine that the underlined word should be a possessive pronoun by using the replacement technique. The sentence is saying that the statements of them were unkind. The word “there” can be used in multiple ways, but to keeps things simple, just remember that “their” indicates possession and “there” doesn’t. 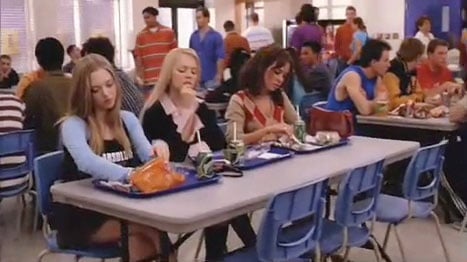 Also, keep in mind that the word “they’re” is a contraction for “they are.” You can only use “they’re” if it can be replaced with “they are.”

Incorrect: I love my friends. Their the best.

Correct: I love my friends. They’re the best.

The underlined word is not indicating possession, but it can be replaced with “They are.” “They” is a pronoun that refers to my friends and “are” is the verb in the sentence.

Check out one more example:

Correct: The puppy was wagging its tail.

The word “it’s” is a contraction of “it is.” The word “its” indicates possession. The sentence is referring to the tail of the puppy or the tail of it. To correctly answer these types of questions, use the replacement technique to determine if the underlined word should be a possessive pronoun.

Incorrect: The chairs had dust on its legs.

Correct: The chairs had dust on their legs.

In the first sentence, the pronoun “their” describes the shoes of Sheila. Because Sheila is one person, we need to use the singular pronoun “her.”

In the second sentence, the underlined pronoun refers to the legs of the chairs. Because “chairs” is plural, we should use the plural possessive pronoun “their.” 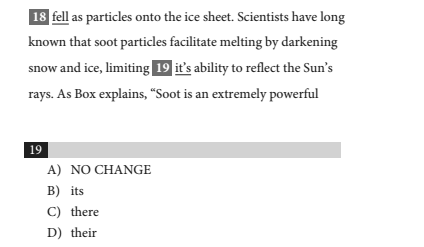 First, let’s determine if the underlined word should be a contraction or a possessive. Does the word mean “it is” or is it a possessive?  Let's try the replacement technique. Does this sentence work?

Scientists have long known that soot particles facilitate melting by darkening snow and ice, limiting the ability of snow and ice to reflect the Sun's rays.

Yes. That works. The sentence is referring to the ability of snow and ice to reflect the Sun’s rays; therefore the underlined word is a possessive. So we can get rid of A and C.

Now we have to determine if the possessive pronoun should be singular or plural. What has the ability to reflect the Sun's rays? Snow and ice. That's two things, so the pronoun that takes their place needs to be plural. The correct answer is D. 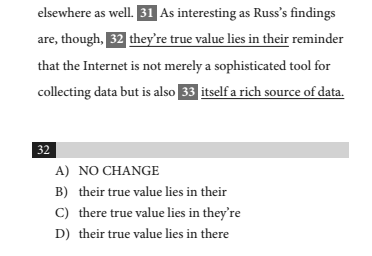 In this question, there are two words in the underlined phrase that could be possessive pronouns. The first is the word “they’re,” which is a contraction for “they are.” Should that word remain the same, be the word “there,” or the possessive pronoun “their?” The sentence implies that the word is referring to the value of his findings, or “their value.” Therefore, we can immediately eliminate A and C.

Next, let’s look at the underlined pronoun “their” after “in.” That word also refers to findings and should be a possessive. Thus, that word should remain the same and the correct answer is B. 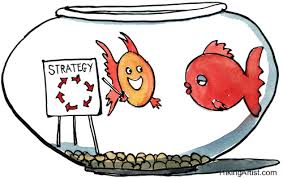 Here are the most important tips to remember to conquer the SAT Writing questions about possessives.

#1: Use the Replacement Technique

Once you see a possessive underlined or in the answer choices, make sure you determine whether the word should be a possessive.

Remember that “Justin’s book” is another way of saying “the book of Justin.” If you saw “Justins book,” you should recognize that there is an error because the phrase is referring to the book of Justin. If a sentence doesn’t work using the replacement technique, then the underlined word is not a possessive.

On possessive questions, you may have to choose between “it’s” and “its” or “their” and “they’re.” Remember that “it’s” is a contraction for “it is” and “they’re” is a contraction for “they are.” If you select “it’s,” the sentence would have to make sense and be grammatically correct if you substituted “it’s” for “it is.” Similarly, if you selected “they’re,” the sentence would have to work if you substituted “they’re” for “they are.”

As you continue your SAT Writing studying, make sure you know the 12 most important grammar rules. Also, pay special attention to punctuation and transitions.

Finally, if you're familiar with the old SAT, find out how SAT Writing has changed.