Will I do better on the SAT or the ACT?

Many students wonder whether they'll do better on the ACT or SAT -- after all it's important to put the best foot forward.  Here we show you how to figure out which one you're better on. 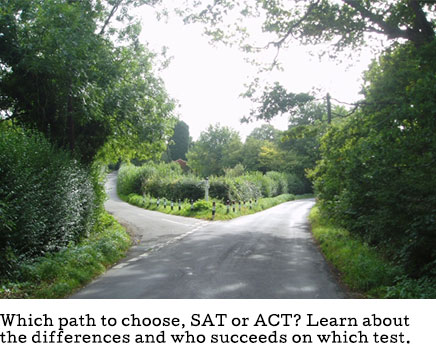 See the following questions and answers to figure out what will probably work better for you.

This depends entirely on the colleges where you want to apply and your specific abilities. Almost all 4-year schools require either (and accept both) the SAT or ACT, so it’s important to know which test can reflect your abilities most fully. Some colleges require no standardized test scores, but it’s best to apply to at least 3 schools (and, for many students, even more than that). Therefore, it’s unlikely that all the schools you want to apply to will be “test optional,” so deciding which test to take is pretty important.

2. Which students think the SAT is easier than the ACT?

The SAT is better if you’re a “good test taker”--if you’re good at figuring out what information tests are looking for, if big tests don’t make you very nervous, or if you don’t get overwhelmed easily by unfamiliar information.

The SAT is better if you’re near a top score, because it’s easier to “ace”--to get a 99th percentile or perfect score on--than the ACT. There are many reasons for this, but if you think you’re going to be scoring high, your chances of scoring in the highest percentiles are better on the SAT.

The SAT is better if you’re good at solving puzzles or “thinking on the fly”--taking unfamiliar information and manipulating it quickly or combining it with knowledge you already have.

3. Which students think the ACT is easier than the SAT?

The ACT is better if you’re better in classes than on tests, if you are good at learning all the material in the textbook, or if you prefer lots of structure in your education.

The ACT is better if you study school subjects more: aside from the ACT resembling a high school test more than the SAT does, it also tests a broader range of knowledge than the SAT does--taking AP Chemistry, for example, won’t help you on the SAT. But it could help significantly on the ACT.

The ACT is better if you’re scoring in the lower percentiles because the average ACT question is a bit easier than the average SAT question, so that middle range is more attainable on the ACT. This does not mean, however, that the SAT is a harder test--we’ll discuss that next.

4. Is the ACT or SAT harder or easier overall?

5. How can I find out for sure which is better for me?

The best way is to actually try it out!  Here are the exact steps:

1. Take a full practice SAT and a practice ACT.

2. Then use the offical ACT to SAT score conversion table to convert your ACT score to its SAT equivalent (the table uses a 1600 scale that includes reading and math only).

4. If your score difference is less than 100 points then you don't have a natural disadvantage in either one.  The point difference is likely due to random chance, and both work equally well.

Compare the current SAT to the version coming in 2016.

Read about the technical differences between the SAT and ACT.