SAT Analogies and Comparisons: Why Were They Removed, and What Replaced Them? 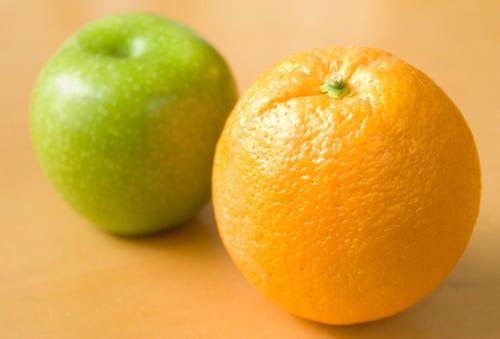 In this article I’ll give you the rundown on what these questions were like, how the SAT replaced them, and how questions have evolved even further on the 2016 version of the test.

What Were SAT Quantitative Comparison Questions?

Quatitative comparison questions used to be a considerable part of the math section (25 percent of questions). Instead of asking you to solve for a value, these questions asked you to determine which of two quantities was larger.

x and y are positive integers.

(the answer is A)


Why Were Quantitative Comparison Questions Removed?

These questions were removed from the SAT in 2005. They were deemed to be somewhat irrelevant to core math skills and a bit too confusing. QC questions were also more reading-based - they were the only math questions that didn’t have symbolic or numerical answers. Ironically, removing them was a move towards making the math section MORE quantitative (that is, purely number or variable quantity-based rather than logical reasoning-based).

The SAT was hoping to disentangle itself from its long-standing reputation as a "tricky" standardized test. Quantitative reasoning questions came across more as riddles than math questions because they don't ask you to find a numerical solution or use a well-outlined mathematical skill set.

Quantitative comparison questions were replaced with questions that specifically targeted areas of math that students were familiar with from algebra and geometry classes and could be used to demonstrate a strong understanding of core math principles.

Not too much has changed from the previous version, but a few more math topics have been added. These include: basic trigonometry, more data interpretation, questions that invoke real life scenarios, and more in-depth questions involving algebra and solving equations.

The latest version of the SAT wants to make sure students have a solid understanding of foundational math concepts AND can apply those concepts in real life. Here's an example of a math question that might appear on the current SAT: 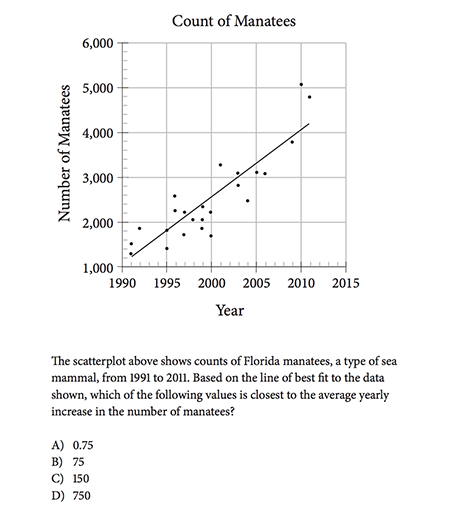 This question asks you to use your mathematical skills to analyze a real data set. The ability to answer quesitons like this more accurately reflects career and college preparedness than performance on quantitative comparison questions, which were totally disconnected from real life scenarios.

What Were SAT Analogy Questions?

These were the original stereotypical SAT questions. You were given a pair of words and asked to choose from five other pairs of words to find the relationship that most closely resembled that of the first pair.

In the following example, you can interpret the dots as the words “is to” so you would think of it as “Paltry is to significance as _______ is to _________.” where the blanks are the two words in one of the answer choices.

(the correct answer is E) 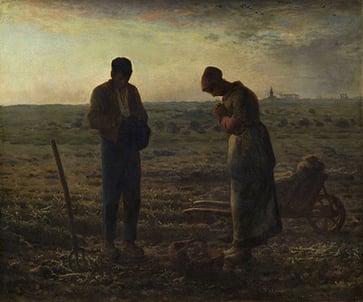 An interpretation of this painting with all the words from the wrong answers: "I'm sick of these redundant discussions in this austere landscape on subjects with which I only have a very oblique familiarity. Let's go rob a bank and buy an opulent mansion with our newfound wealth."

Why Were SAT Analogy Questions Removed?

Analogy questions were removed in 2005 when the verbal reasoning section of the SAT was renamed "critical reading". These questions were criticized for being irrelevant to success in a college or work environment. Analogy questions gave the SAT its reputation for using “tricky” question formats and being a puzzle rather than a straightforward assessment.

They were also criticized for being biased towards certain socioeconomic groups. This question in particular was called out by the National Center for Fair & Open Testing for providing a clear advantage to coastal elites:

The answer was C, but unless you own at least one pair of salmon-colored shorts you probably don't have more than a vague idea of the relationship between those terms.

It was also argued that analogies could be coached (giving more advantage to kids who can afford tutors) and used vocabulary that was too unorthodox for most students to know. On an analogy question, you can’t rely on context if you don’t know the meaning of a word. You’re basically stuck with guessing. Try comparing apples to oranges when you don’t know what an orange is or you think you have a vague idea that it might also be some kind of food. It’s...fruitless.

Sentence completion questions were the closest analogue (sorry, the wordplay is getting out of hand) to analogy questions on the 2005-2015 version of the SAT. Though they were also on the SAT prior to 2005, after the removal of analogy questions they became the only real vocab-centric questions in the Critical Reading section.

These questions called for skills in identifying vocabulary in the context of a sentence. You were given a sentence with one or two blanks and asked to choose the best vocabulary word to fill in the blank(s).

Here’s an example about Jones, who you find out was actually a ghost the whole time at the end of the SAT:

____ by nature, Jones spoke very little even to his own family members.

(the answer is C)

You can see how these questions might still present a problem if you don’t have an advanced vocabulary, but they did give you a little more to work with if you weren't sure of the exact definitions of the words.

On the current SAT, sentence completion questions are replaced with vocabulary in context questions. These questions are similar to reading questions found on the ACT. You are asked to pick out the closest synonym for a vocabulary word that appears in a passage.

...The coming decades will likely see more intense clustering of jobs, innovation, and productivity in a smaller number of bigger cities and city-regions. Some regions could end up bloated beyond the capacity of their infrastructure, while others struggle, their promise stymied by inadequate human or other resources.

As used in line 55, “intense” most nearly means

(the answer is B)

The goal of these questions is to encourage students to understand the nuances in meaning of more common words rather than overwhelming them with a bunch of archaic vocabulary. The best way to study for these types of questions is to focus on honing your passage reading skills. The ability to read and interpret the meanings of passages correctly is key on the current version of the SAT because all questions in the reading section are passage-based.

Essentially, the SAT removed these old types of questions to reduce criticisms about inequality. The test continuously finds itself under fire for the direct proportionality of family income to test scores, and it has made numerous efforts over the years to reinvent itself to combat this problem. In a decade, we may see yet another re-imagining of the SAT to tackle these issues in a different way.

It's not just the SAT Math section that asks you to read charts and graphs. The Reading and Writing sections have data interpretation questions as well. Learn more about the best ways to solve them.

You should also check out this guide to figure out when you should take the SAT.