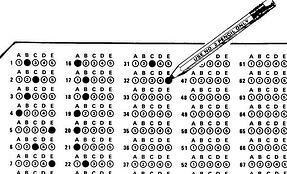 Today the makers of the SAT test announced some changes coming up in the next few years to focus better on academic skills. The changes were supposed to come in 2015 originally, but due to some bugs, they were delayed until at least 2016.  Even today, a precise launch date isn't set yet.

The purported changes include reducing emphasis on vocabulary, making the essay optional, changing from a 2400 scale to 1600, and eliminating the guessing penalty, and more.  What does this mean for you?

Aside: Considering taking the new SAT? Check out our guides to deciding, whether you got a high score or a low one.

The short answer is: less than you think.  Here's why:

One of the major changes is a shift from 2400 points to 1600 total.  Seems like a drastic change? Well, the 1600 system used to be the old system until year 2005. This isn't so much a "new change" insomuch as it's a reversion to the old way of doing things. And eliminating a pure writing section to be reading and math again?  We saw that before 2005 too!

This isn't a surprise to SAT experts.  Many colleges have been reluctant to accept the 2400 system. Most colleges downweight the writing section, and some colleges throw away the writing score altogether. The College Board has learned their lesson that cramming a writing score down the mouths of students and colleges isn't the way to go.

A turn to the 1600 system isn't so much a major step forward as much a reversion to older times and older strategies.

2. No Guessing Penalty?  That makes no difference!

The SAT makers announced today that the guessing penalty will be eliminated from the SAT.  It turns out that mathematically this makes no real difference on the way you take the test.  This isn't mere speculation, but a proven Statistics 101 fact.  The intuition behind the proof is that even now there is no real guessing penalty to begin with: even in the current SAT, there is no expected statistical loss if you make a completely random guess!

We'll post more about the proof later, and what you can do to take advantage of the new system, but take our words on it -- there's no change at all to meaningful guessing tactic.

3. Less Vocabulary?  This has been the trend already.

Did you hear that the new SAT won't be chock full of rare words (esoteric, inscruable, recondite, etc)?  While this gives academics a topic to argue about (how important are difficult words in assessing education), it doesn't mean that much for the student.

This has been the way the SAT has been trending for years.  In fact, most of the power of vocabulary for the SAT was neutralized when the SAT decided to get rid of analogies in 2005. Before 2005, analogies and vocabulary used to dominate the SAT and form the large majority of skill tested in the reading section.

The reduction of vocab on the SAT is more symbolic than practical.  Practically speaking, rare words have been on the decline for years.  And don't pack up your index cards yet: the SAT will still target vocab to some extent, but more towards words that are used in college courses like "synthesis and "empirical".

4. Optional Essay?  Optional if you don't want to impress colleges.

Supposedly the new essays are going to be optional.  Some people have even called this "dropping the essay from the SAT."  This is far from true if the past is any indicator.

In reality, the colleges that students apply to will decide what's optional and what's not.  What's technically optional optional paper may not be optional in reality.  For example, back in 2005, not only were essays optional, the entire writing section was optional!  You know what happened?  A large number of universities requested the writing section anyway.  In the end, all students had to take the "optional" writing section in order to have a shot at these universities.

Sure, so go ahead and make the essay optional.  But until colleges stop requesting them, new students will still do well by studying for an essay.

This isn't the first time the makers of the SAT said they were going revolutionize the SAT.  Did you know major changes were announced in 2005, 1994, and regularly before that even?  Of course, some of the smaller details and strategies will change, and the ecosystem, including us at PrepScholar will adapt to that.

To hail this as fundamentally revolutional would be to take these announcements too far though.

How do you prepare for this new test?

We at PrepScholar Online SAT Prep are always keeping abrest of the latest changes, and in the next few months we'll be talking about some tactical and strategy changes that students will have to make for the SAT.  If you're interested subscribe to our blog to the right to keep updated!

Should you take the new SAT or old SAT?

A Breakdown of the New SAT - the Complete Guide

Want to Improve your SAT score?