What Is the National Letter of Intent for NCAA?

If you’re a big fan of college sports, you may have seen a news conference on ESPN where a highly recruited high school athlete announces what college he is going to attend (usually in a dramatic way), and then he signs a piece of paper. That piece of paper is his National Letter of Intent; he is now legally bound to attend that college and the recruiting process is officially over.

In this article, I will explain what the National Letter of Intent is, why it exists, and its terms.

What Is the National Letter of Intent?

The NLI is a binding agreement between a prospective student-athlete and an NLI member institution to enroll at a school in exchange for athletic aid. There are 650 NCAA Division I and II colleges that participate in the NLI program.

By signing the NLI, a prospective student-athlete agrees to attend the institution full-time for one academic year (two semesters or three quarters).

The institution agrees to provide athletic aid for one full academic year. Athletic scholarships can be renewed every year, but you only have to sign the NLI once.

The coach will tell you how much aid you’re being offered before you receive the NLI. The NLI will be accompanied by an athletic aid award letter that tells you the amount of aid you’re receiving. Award letters are the responsibility of the specific institution.

Penalty for Not Fulfilling the Agreement

If you don't enroll in the school, you can't compete for one academic year at the next NLI institution you attend, and you lose a year of eligibility.

Purpose of the NLI

The purpose of the NLI is to have a written agreement that you will receive athletics aid in exchange for enrollment, provided you are admitted to the school and eligible to compete.

Also, signing a National Letter of Intent signifies the end of the recruiting process. Once you sign the NLI, you can’t be recruited by other schools. If another school tries to recruit you, you have to notify them that you’ve signed your NLI. 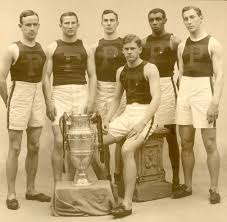 These Princeton athletes didn't have to sign an NLI

Example of a National Letter of Intent

It wasn't easy, but I did some digging on the internet, and I found an actual National Letter of Intent for you to check out.

This NLI was from a few years ago and some of the signing deadlines have changed since then. Now, you must sign your NLI within 7 days of it being issued to you, and the NLI must be filed by the conference within 14 days.

How Does a College Process the National Letter of Intent?

The college then verifies the required information and sends it to its conference office to be validated. The NLI must be filed by the conference within 14 days of the final signature.

The NLI process is completely independent of the college admissions process. Typically, a school won't issue an NLI and offer of athletics aid until after a student-athlete has been admitted to the institution. There are some exceptions and cases where a school has to rescind an acceptance after an NLI has been signed due to a failing grade or disciplinary issue, but most often signing the NLI is the last step in a student-athlete's college selection process.

Here are the NLI signing dates for the upcoming year. Generally, these dates stay roughly the same from year to year.

The initial signing dates are the first dates you're able to sign an NLI in a signing period and the final dates are the deadlines by when you must sign the NLI in that period. If you don't sign early, you can always sign in the regular period.

Most coaches try to sign their top recruits in the early period because they don't want to lose them to other schools. In the regular period, they'll try to fill the rest of their recruiting classes with late finds, student-athletes they were previously unsure about, or top recruits who didn't want to commit in the early signing period.

Schools will often make admissions decisions sooner for athletic recruits so they can sign in the early period (or in the beginning of the regular period), but sometimes an athlete will have to apply to a college "early decision" or "early action" if he wants to sign early.

Typical Reasons You'll Be Released From Your NLI

1. You are not admitted into the university- If you don't get accepted by the university, you won't be receiving your scholarship. However, typically, the NLI will only be issued by the school after you gain admission.

3. One-year absence- If you sign an NLI and do not attend any school for one year, you would then be allowed to attend another university if you file for a release with that school’s conference office. Your athletic department at the school you will be attending can help you with that process.

5. Discontinued sport- If the school cuts the program for the sport you signed for after you have signed, you'll be allowed to sign with another school without penalty.

Finally, if there's an extenuating circumstance or compelling reason why you want a release from your NLI, you can fill out an NLI release request form on www.national-letter.org .

If you join the military, you can be released from your NLI.

Don't procrastinate in signing your NLI. Generally, you'll only have 7 days from the date it's issued. All you have to do is sign it, get a guardian to sign it, and return it.

However, don't stress the NLI. If you receive an NLI, you've done the hard part. You've been offered an athletics scholarship. The college will walk you through the process, if necessary. The school wants you. That's why you were offered a scholarship.

Make sure you're registered with the NCAA Eligibility Center. Not only do you need to be certified as eligible before you can participate in NCAA sports, but also you need to register before you can take official campus visits during your recruiting process.

Most importantly, focus on your academics. Regardless of how gifted you are athletically, you need to be admitted to college academically. Even after you sign your NLI and you've been accepted by the college, you want to make sure that you finish your senior year strong to ensure you'll be eligible to compete and so that there's no chance you'll have your acceptance rescinded.

Make sure you know the SAT and ACT scores you need to compete in NCAA sports. Also, learn what you have to do to build the most versatile college application.

Finally, review this article on the college athletic recruiting process.