Why do you need to prep for the SAT? 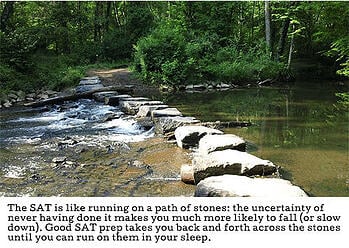 The Origins of the SAT

When the ETS (the folks who make the SAT) began, way back in 1947, college admission was based entirely on high school records and admissions counselors’ opinions of students’ “character.” Obviously, this was a bad way to form a student body and also extremely unfair. There had to be some way to assess all the students in the country uniformly to be able to compare between them.

The Challenge of the SAT

But how do you test “scholastic aptitude,” as the SAT used to claim it did? You have to use only material that everyone has been taught in school, or it’s unfair. You have to make it multiple choice, or grading would be impossible (the essay is an attempt to bypass some of the limitations of multiple choice testing). They’re not trying to test subjects, they’re trying to test reasoning: “to think, understand, and form judgments by a process of logic; to find an answer to a problem by considering various possible solutions” (adapted from the New American Oxford Dictionary).  But there are lots of systems in which logic operates: which to choose?


What They Decided to Do

In an effort to be fair to “language people” and “math people” alike, they chose to include both systems in their test of “scholastic aptitude.” (They had to change this acronym because many people claimed that the SAT was not an accurate test of scholastic aptitude--now the letters “SAT” technically don’t stand for anything.) But, inevitably, the standardization of the test--from student to student and year to year--required that they use the exact same elements of these two subjects, phrased in the exact same way, in every test.

So they ended up with a test that has the same question formats testing the same concepts over 170 questions per test, 7 tests per year, for as many years as they can get away with not changing it. Because this test can make or break a student’s college options (and, arguably, his or her life options), each question has to be totally airtight--no exceptions, no way to interpret the answer in multiple ways. The point of all this is that the SAT is, by definition, an extremely rigid, consistent and unintuitive test--and those 3 aspects of it make SAT prep almost a necessity for most students.

The ETS tests (SAT, GRE, and TOEFL, among others) are unlike any other test you’ve ever taken. They’re held in these specific places and times, have multiple sections about alternating subjects, and are extremely particular about what you are and aren’t allowed to use (e.g. a calculator and a watch are fine; your phone is not).  This aspect alone is something everyone who cares to do well on the test should be prepared for.

Originally, the ETS claimed that the test was designed not to require preparation--after all, reasoning is reasoning, right? But out here in the real world, people were learning different. Eventually the College Board (the people who own the SAT--ETS only designs and runs it) was compelled to produce some limited preparation materials in response to public pressure.  One main reason for this is that the questions on the SAT are both strangely worded and totally predictable, a combination practically designed to benefit those who prepare for the test. For example, a common Math question type is formatted like this:

If someone tells you it’s opposite day, which of the following must be true?

I. It is opposite day

II. It is not opposite day

III. The person is lying

D: I and III only

Don’t think too hard about this one. The point is that this question seems much harder than it is, because this is an insane way to phrase a question. Good SAT prep (including PrepScholar) will familiarize you with how to handle these question types, among others that will almost definitely confuse students who have never seen them before.

The content of the SAT, on the other hand, will be familiar to most high schoolers. The highest levels of math it requires are some complicated algebra and plane geometry; all the English skills it requires are basic tenets of writing. In fact, the content of the SAT has been pretty much the same since the 50s. The addition of the Writing section in 2005 was the biggest recent change to the test, but it’s just as formulaic and consistent as the others, for the reasons we discussed earlier in this post.

The consistency of the content of the SAT is perhaps the most compelling reason to prep thoroughly--it asks about things that may seem random to the unprepared, but are actually part of a very narrow band of language and math skills. Similarly, the content that the SAT doesn’t test can be helpful to know, because it’s easy to get distracted by thing that seem odd about a question but aren’t actually ever tested.

If you’re trying to plan your SAT prep, this blog post should be able to help you out. You don’t have to prep with us, but you should prep with something. The ETS tried to make a pure test of reasoning, but it can’t be done. The result is an idiosyncratic, seemingly random, set of topics and questions for which it is essential to prepare.

And if you found this helpful or interesting, please share it or consider joining the mailing list to get our updates and insights 1-2 times per week!

Also, get our FREE EBOOK on SAT Prep: