How to Pass the Air Force PT Test 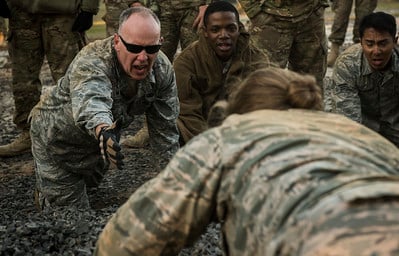 Considering joining the Air Force or the Air Force ROTC? Then you’ll need to take the Air Force PT Test, a unique test designed to measure your overall fitness level. This test is used as an entry test for new recruits and as a routine fitness check-up for active Airmen and ROTC cadets. But how hard is it, really?

Read on to learn what the Air Force Fitness Test entails and what score you must get to pass it.

What Is the Air Force PT Test? Who Takes It?

The Air Force Physical Training Test (also called the Air Force Fitness Test or Air Force PT Test) is a routine physical performance test that's used by the US Air Force to measure your level of fitness and endurance.

It is used regularly as a benchmark to ensure that those who are in the Air Force (or about to join it) are physically fit and continue to meet the minimum fitness requirements for service.

The Air Force PT Test consists of measuring your abdominal circumference (for calculating your overall body composition) and the completion of three events:

Your performance on all four components is converted into a final score to show how fit you are, with 75 being a minimum passing score, regardless of gender and age (more on scores later).

Most are required to take the Air Force Fitness Test twice a year, though you might have to take it more often (every 90 days) or less often (once a year) depending on the score you get.

Here are the people who must take this test: 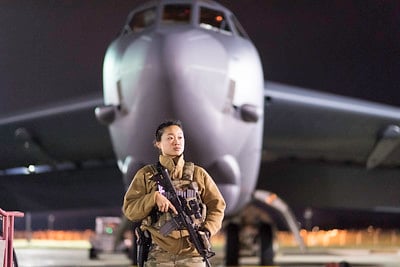 What Scores Do You Need to Pass the Air Force PT Test?

All people taking the Air Force Fitness Test must get a passing score of 75, with 90 or higher being considered excellent. They must also meet the minimum value in each of the four components.

While these expectations are the same for active Airmen, new recruits at training camps, and ROTC cadets, specific physical fitness expectations do vary based on age and gender.

Here are the minimum Air Force PT requirements for males and females in different age groups:

As you can see in this AF PT chart, the younger you are, the more challenging the expectations are for you when it comes to passing the AF PT Test.

Here’s how these minimum requirements were determined, according to the Air Force:

"The minimum requirement for the aerobic and body composition components was established at the cut line between moderate and high health risk associated with that component. Air Force officials want Airmen to avoid the high health risk region in order to pass the test. For pushups and sit-ups, the minimum requirements were established at the 50th and 60th percentiles, respectively, for performance among the entire U.S. population based on widely accepted fitness data."

As long as you get the minimum scores for your gender and age group, you'll get at least a 75 overall and will have therefore passed the Air Force Fitness Test. Passing means that you are physically fit and will need to take the test every six months (the basic requirement).

Should you score much higher in these four components and get 90+ overall, you'll only have to take the test once a year (instead of every six months).

However, if you fail the AF PT Test by earning less than these minimum scores as well as less than a 75 overall, then you’ll need to retake the test after a 90-day reconditioning period to get you back on track and back in shape. 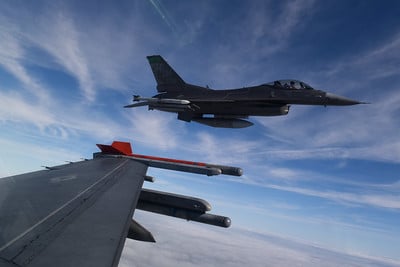 The Air Force Physical Training Test, or Air Force PT Test, is a physical performance test designed to measure the overall fitness levels of individuals who are currently in or are in the process of joining the Air Force (so Airmen, new recruits, and ROTC cadets). Most are required to take it twice a year.

Your performance on all four components is converted into a numerical score. All test takers must get a score of 75 overall (and earn the minimum score in each component) to pass the AF PT Test. Exact physical requirements will vary based on gender and age.

If you knock the test out of the park with a score of 90+, you're allowed to take the AF PT Test only once a year. If you get a passing score of 75-89, then you'll have to take it twice a year. Should you fail the test at any time, you must retake it in 90 days after a reconditioning period to help you get back in shape.

And that's really all there is to the Air Force Fitness Test!

Interested in attending the US Air Force Academy for college? See whether you're on track to getting in by looking at our admission requirements page for this selective military institution.

Considering joining the ROTC? Check out our expert guide to the three ROTC programs to learn how they function and what to expect if you join.

What exactly is a military college? How do they work? You can get answers to these questions and more in our comprehensive guide to military schools.