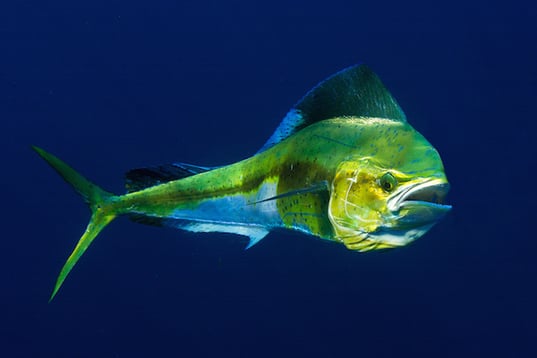 What Is a Dolphin Fish/Mahi-Mahi?

Dolphin fish are a large species of fish that have a single dorsal fin that extends from the head to the tail. Males’ heads are rounded to the point where they protrude out. Females’ heads are rounded and smooth. The dolphin fish is also a vibrant, brightly colored fish that is golden on the sides and brightly colored blue and green on its sides and back. Mahi mahi fish grow to be 2.5-4.5 feet long, and catches have been recorded from 15 pounds to over 40 pounds.

Dolphin fish are found in the Indian, Pacific, and Atlantic Oceans in tropical and subtropical waters. They dwell in temperatures that are at least 90 degrees, usually on or near the equator. While mahi mahi fish are most common in and prefer tropical waters, they can also be found in cooler waters as far north as Massachusetts.

Dolphin fish stay near the surface of the water, and close to the shore. They can usually be found in depths up to 250 feet. Dolphin fish are especially prominent in the Caribbean and the Gulf of Mexico, where a majority of fishing takes place. The dolphin fish is also found in large numbers off the coast of Hawaii.

Dolphin fish reproduce at a rapid rate. They are sometimes jokingly referred to as “the rabbits of the ocean” Dolphin fish reach maturity at 4-5 months old, and should definitely be fully mature by the time they’re a year old.

Female dolphin fish can lay 100,000-1,000,000 eggs at a time and can lay eggs 2-3 times per year. Dolphin fish don’t have strict migratory patterns. They usually swim north as waters warm, and populations in those northern areas peak around July.

The fish can live up to five years, but it’s rare for them to exceed four, and the average lifespan is estimated to be 2-3 years. They’re usually caught by fishermen or predators. 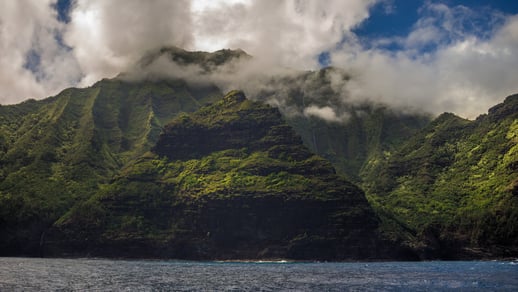 How Is a Dolphin Fish Different From a Dolphin?

It’s likely that the misnomer for the dolphin fish came from the old scientific naming and classification system. Previously, the dolphin fish was categorized in the “Dolfyn” family, instead of the Coryphaena family. The bottlenose dolphin is in the family Delphinidae. As you can see, the dolphin fish and dolphin are not in the same scientific family, or genus, which demonstrates their lack of relationship with one another.

The dolphin fish is sometimes called “a gift for fisherman” because they are near the coast, close to the surface, and the fish usually yields a lot of meat. The mahi mahi fish is not considered endangered, and is cited as an environmentally-friendly fish for consumption. Due to their rapid reproduction rate, the dolphin fish replaces its population quickly,

Though the dolphin fish is not in immediate danger of extinction or significant population decrease, like all ocean dwelling creatures, issues associated with climate change could impact the fish. 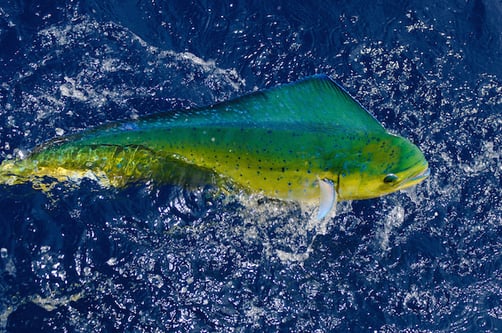 Interested in earth and animal science? Read up on the photosynthesis equation and animal cells.

For more about science and biology, check out cell theory, the 4 phases of mitosis, and meioses vs. mitosis.