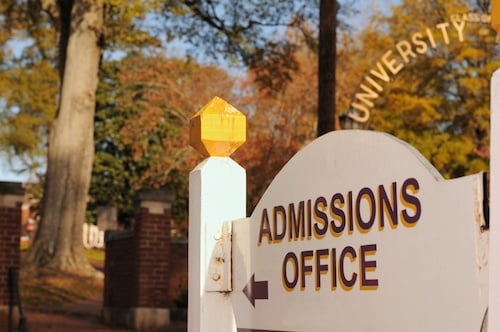 Many 4-year U.S. colleges and universities require SAT or ACT scores from their prospective students. Admissions officers, particularly those selecting for academic ability, consider the SAT as a measurement of academic ability and potential. The SAT is meant to be a reasoning test that evaluates students' problem-solving and analytical skills, rather than their specific content knowledge.

Note: this article is a series in the PrepScholar 2016 Students' Encyclopedia, a free students' and parents' SAT / ACT guide that provides encyclopedic knowledge.  Read all the articles here!

SAT scores are not the sole criterion for admission, nor are they the only measure of academic ability within a student's college application. Scores are considered in conjunction with high school grade point average (GPA), course selection, and other indicators of achievement. Many admissions officers emphasize that they take a holistic view of each applicant, considering the "whole person" as evidenced by his/her grades, extracurricular involvement, recommendations, and personal essay, among other demonstrated interests, accomplishments, and goals.

While most colleges do not publicize specific SAT score minimums, many share data on the average scores of their accepted students. If this data shows a range of scores from the 25th to the 75th percentile, then the higher end of the range may be more representative of the school's SAT score expectations for the majority of regular applicants. The lower end of this kind of range may reflect the scores of special interest applicants who can gain admission with lower SAT scores, like students who are recruited for athletics.

While many admissions officers claim they take a holistic approach, some will not review applications that do not contain a certain minimum SAT score. Conversely, high SAT scores are rarely a guarantee of admission, especially not at selective institutions like those in the Ivy League. Students that entered Harvard's class of 2017, for example, had an average SAT score of 2237. Harvard's recruited athletes, on average, scored 173 points lower on the SAT than their non-recruited classmates.

In addition to sharing data on average SAT scores of incoming students, most colleges share their policies on SAT scores. Some schools "superscore" the SAT, or take students' highest section scores across all testing dates and recombine them into a maximized composite score. Popular schools that have a policy of superscoring the SAT include Boston University, Columbia, Harvard, Johns Hopkins, MIT, Princeton, and the University of Connecticut.

An increasing number of colleges have adopted test flexible and test optional policies. These may allow students to send SAT Subject tests or AP tests in lieu of the general SAT or to choose whether or not to send their SAT scores. NYU, for example, allows students to send three SAT Subject Tests or three AP tests in lieu of the SAT, among other options.

While students may be able to decide whether their scores are an accurate representation of their academic ability when applying to test optional schools, those who omit their scores may be at an empirical disadvantage when compared with their peers who chose to include their scores. Hampshire College is the only school thus far that has adopted a "test blind" policy, stating, "We will not consider SAT/ACT scores regardless of the score. Even if it's a perfect score, it will not weigh into our assessment of an applicant."

While colleges take varied approaches to their consideration of SAT scores, College Board states that the SAT is meant to give national perspective to local data from schools on students' achievement and ability. As a standardized test, College Board maintains that the SAT measures academic ability independent from differences among students' educational experiences by school district, including variations in curricula, school funding, and course rigor.

Critics of the SAT draw on data that shows a correlation between higher SAT scores and higher levels of family income and parental education. Rather than testing students "on a level playing field," SAT critics claim that the SAT contributes to existing patterns of social and educational inequality.

The changes made to the redesigned SAT, which will be administered starting in March of 2016, may have been partially motivated to address these criticisms and to make the SAT more accessible to students across income levels. The elimination of high level vocabulary words in favor of medium-range, multiple meaning words, for instance, may be one change aimed to make the test more fair and to improve its validity and predictive power. College Board also recently began a collaboration with Khan Academy to offer free videos, lessons, and sample questions for students to prepare for the new SAT.

In addition to addressing the concerns of critics, College Board may have been motivated to update the SAT in order to remain competitive with its counterpart, the ACT. Historically, the majority of American students who lived on the East and West coasts took the SAT while students in Midwestern states took the ACT. In 2011, the number of students who took the ACT nationwide surpassed the number that took the SAT for the first time. The redesigned SAT will more closely resemble the ACT in several ways, particularly in the format of its vocabulary questions and its newly optional essay.

Read more from the SAT Encyclopedia!

Which Colleges Superscore the SAT?

How Can You Build the Most Versatile College Application?