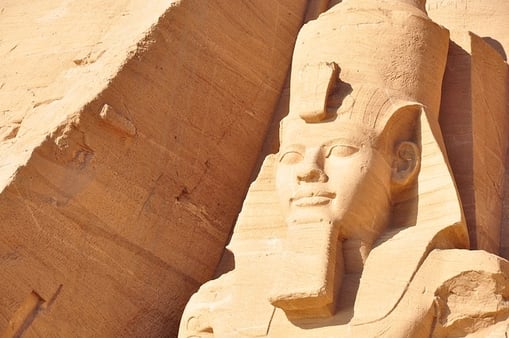 With its heavy irony and iconic line, "Look on my Works, ye Mighty, and despair!" "Ozymandias" is one of the most famous poems of the Romantic era. It was written by Percy Bysshe Shelley in 1817 and eventually became his most famous work. The poem describes the half-buried remnants of a statue of Egyptian pharaoh Ramesses II and contrasts the pharaoh's proud words with his ruined likeness.

In this guide, we give the background on how "Ozymandias" was created, explain the key Ozymandias meaning, and discuss the poetic devices used in this poem. By the end of this article, you'll have a complete understanding of "Ozymandias."

Below is the complete text of Percy Bysshe Shelley's poem "Ozymandias."

I met a traveller from an antique land,
Who said—"Two vast and trunkless legs of stone
Stand in the desert. . . . Near them, on the sand,
Half sunk a shattered visage lies, whose frown,
And wrinkled lip, and sneer of cold command,
Tell that its sculptor well those passions read
Which yet survive, stamped on these lifeless things,
The hand that mocked them, and the heart that fed;
And on the pedestal, these words appear:
‘My name is Ozymandias, King of Kings;
Look on my Works, ye Mighty, and despair!'
Nothing beside remains. Round the decay
Of that colossal Wreck, boundless and bare
The lone and level sands stretch far away."

How Was "Ozymandias" Created?

There are actually two Ozymandias poems, and they were written as part of a friendly writing competition. The poet Horace Smith spent the end of 1817 with Percy Shelley and his wife Mary Shelley (the author of Frankenstein). During this time, Percy Shelley and Smith challenged each other to a poetry competition. The Shelleys moved in literary circles, and they and their friends would often challenge each other to writing competitions, so this wasn't anything out of the ordinary.

For this competition, Shelley and Smith wrote about the Egyptian pharaoh Ramesses II ("Ozymandias" is the Greek name for Ramesses II). Earlier in 1817, it was announced that archaeologists had discovered the remains of a statue of Ramesses II and were sending the fragments to the British Museum. This may have been the inspiration behind the theme of the competition. Ancient Egypt in general was also very much in vogue among the British upper classes, and many of Shelley's contemporaries took a great interest in the period and any new archaeological discoveries in Egypt.

In writing his poem, Shelley was highly influenced by ancient Greek writings on Egypt, particularly those of a historian named Diodorus Siculus. In his Bibliotheca historica, Diodorus states that the following phrase was inscribed at the base of a statue of Ramesses II: "King of Kings Ozymandias am I. If any want to know how great I am and where I lie, let him outdo me in my work." Diodorus is the "traveler from an antique land" Shelley refers to in the poem's opening line.

Shelley's poem was published under the pen name "Glirastes" on January 11, 1818, in the weekly paper The Examiner. (Smith's poem was published in the same paper several weeks later). Shelley later republished the poem in 1819 in his collection Rosalind and Helen. Although it didn't receive much attention when it was published, "Ozymandias" eventually became Shelley's most well-known work, and the phrase "look on my works, ye mighty, and despair" is often referenced in popular culture.

What Is the Meaning Behind "Ozymandias"?

What message was Shelley trying to convey with the poem Ozymandias? The major theme behind "Ozymandias" is that all power is temporary, no matter how prideful or tyrannical a ruler is.

Ramesses II was one of the ancient world's most powerful rulers. He reigned as pharaoh for 66 years, led the Egyptians to numerous military victories, built massive monuments and temples, and accumulated huge stores of wealth. He eventually became known as Ramesses the Great and was revered for centuries after his death.

Throughout the poem, Ramesses' pride is evident, from the boastful inscription where he declares himself a "king of kings" to the "sneer of cold command" on his statue. However, "Ozymandias" makes it clear that every person, even the most powerful person in the land, will eventually be brought low, their name nearly forgotten and monuments to their power becoming buried in the sand.

Although the poem only discusses Ozymandias, it implies that all rulers, dynasties, and political regimes will eventually crumble as well, as nothing can withstand time forever. At the time the poem was written, Napoleon had recently fallen from power and was living in exile, after years of ruling and invading much of Europe. His fate is not unlike Ozymandias'. When Ozymandias orders "Look on my works, ye mighty, and despair!" he meant to cause his rivals despair over his incredible power, but he may have only caused them despair when they realized their ignominious end was as inevitable as his. 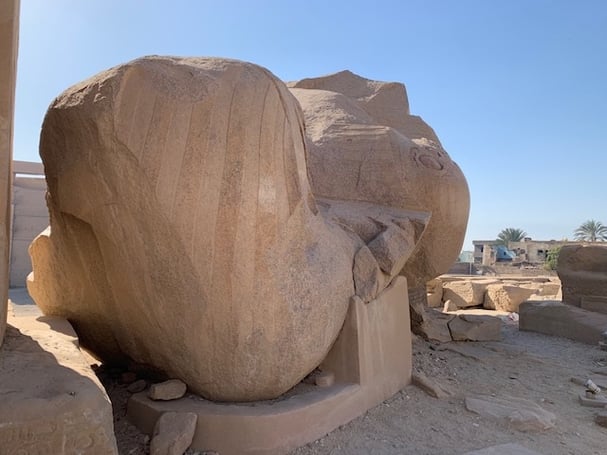 The fallen statue of Ramesses II in Luxor, Egypt that Shelley is said to have based his poem on

What Poetic Devices Does "Ozymandias" Include?

For a fairly short poem, "Ozymandias" is full of poetic devices. A poetic device is a linguistic tool that a poet can use to help convey their message, as well as make the poem more interesting to read or hear. In this section we discuss the key poetic devices in the Ozymandias poem.

"Ozymandias" is a sonnet, which is a type of poetic structure. All sonnets, including "Ozymandias" are fourteen lines long and written in iambic pentameter. The iambic pentameter sounds more natural than many other rhythms, but it still has a purposeful enough rhythm to easily differentiate it from normal speech (even in the 1800s no one would naturally speak the way "Ozymandias" was written).

Contrary to many other sonnets though, "Ozymandias" has an unusual rhyming scheme, following the pattern ABABA CDCEDEFE. Most sonnets follow the rhyme scheme ABBAABBA and CDECDE or CDCDCD.

Sonnets have been a standard poetry format for a long time—Shakespeare famously wrote sonnets—and it would have been an obvious choice for Shelley and Smith to use for their competition since sonnets have a set structure but still allow the poet a great deal of freedom within that structure.

Alliteration is the repetition of a sound or letter at the beginning of multiple words in a sentence or paragraph. There are several instances of alliteration in "Ozymandias" including the phrases "cold command" and " boundless and bare."

The repetition in alliteration often makes a poem sound more interesting and pleasant, and it can also create a soothing rhythm in contrast to the tension caused by enjambment (see below).

An apostrophe is a poetic device where the writer addresses an exclamation to a person or thing that isn't present. In "Ozymandias" the apostrophe occurs in the inscription on the statue's pedestal: "Look on my Works, ye Mighty, and despair!" This isn't being spoken to anyone in particular, just whoever happens to come across the statue.

Apostrophe was particularly common in older forms of poetry, going all the way back to ancient Greece. Because Shelley was using an ancient Greek text as inspiration for his poem, he may have wanted to include poetic devices from that time period as well.

Assonance is the repetition of vowel or diphthong sounds in one or more words found close together. It occurs in the phrase "Half sunk a shattered visage lies." The short "a" sound in "half" and "shattered" is repeated. The "a" sound is actually repeated throughout the poem, in words like "traveller," "antique," "vast," and even "Ozymandias" himself. Like alliteration, assonance can be used to make a poem more interesting and enjoyable to listen to.

Enjambment is the continuation of a sentence beyond a line break, couplet, or stanza without an expected pause.

In "Ozymandias" there are numerous examples of enjambment, including "Who said—"Two vast and trunkless legs of stone/Stand in the desert. . . . Near them, on the sand," and "Nothing beside remains. Round the decay/Of that colossal Wreck, boundless and bare" In both examples, the line break occurs in the middle of a sentence.

Enjambment is a way for the poet to build action and tension within a poem. The tension comes from the fact that the poet's thought isn't finished at the end of a sentence. Each line with enjambment is a mini-cliffhanger, which makes the reader want to keep reading to learn what happens next. Enjambment can also create drama, especially when the following line isn't what the reader expected it to be.

Irony is when tone or exaggeration is used to convey a meaning opposite to what's being literally said. The Ozymandias meaning is full of irony. In the poem, Shelley contrasts Ozymandias' boastful words of power in with the image of his ruined statue lying broken and forgotten in the sand. Ozymandias might have been powerful when he ordered those words written, but that power is now long gone, and his boasts now seem slightly silly in the present time. 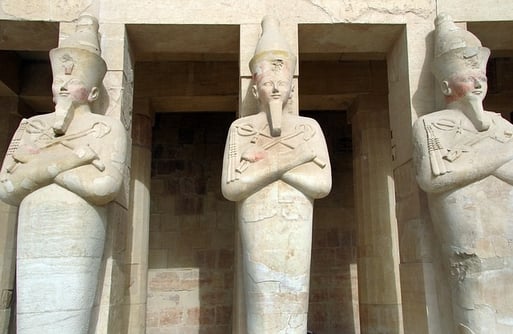 Are you also learning about Edgar Allen Poe's "The Raven" in class? Read our guide to learn all about this famous poem, including its meaning, literary devices, and what that raven actually stands for.

There are many poetic devices that are crucial to know, and you can become an expert on them by checking out our guide on the 20 most important poetic devices.

Dylan Thomas' "Do Not Go Gentle Into That Good Night," is another extremely famous poem. Our article will give you some in-depth information on the meaning of Dylan Thomas' poem, including how to analyze it!