If you’re planning to take the SAT, you may have heard of this strange question type known as grid-ins. You probably know that there are multiple-choice questions and an optional essay, but what are grid-ins? Problems that require you to draw pictures or graphs, perhaps? The reality is grid-ins are almost identical to multiple-choice questions; they just don’t provide answer choices.

This guide will explain what grid-ins are, discuss where they appear, outline how many appear on the SAT, and provide tips on answering them.

What Are SAT Grid-Ins?

As you might have guessed, these are called student-produced response questions because they require you to come up with the answer on your own—no possibilities are provided for you.

They’re also called grid-ins because you need to grid in the correct answer on your answer sheet. For a typical multiple-choice question, you’d simply bubble in A, B, C, or D to answer the question. For a grid in, you’re provided with a grid such as the one below.

The slash represents a fraction line, and the period represents a decimal point. You then write the answer in the four slots provided and fill in the corresponding bubbles beneath. Below, I’ll provide some examples of how to grid in responses. 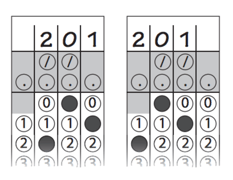 If an answer can be written in fraction or decimal form, you grid it in either way. For example, there are three acceptable ways to grid ${2}/{3}$. 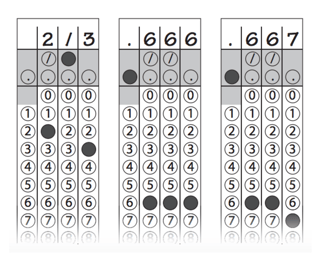 Where Do SAT Grid-In Questions Appear?

These questions only appear on the SAT Math section in both the no-calculator and calculator portions. They will always appear at the very end of these two parts after the multiple-choice.

How Many Grid-In Questions Are There?

To ensure you answer grid-in questions correctly and to save time on the actual SAT, you should familiarize yourself with the rules now. That way, you won’t have to read the instructions during the test.

Here are the five key tips regarding grid-in questions:

Let's look at a couple of example questions to see how these questions work on the actual test.

As I mentioned, when there are multiple answer possibilities, you simply choose one to fill in. In this case, it would be easiest to grid an integer such as 4, 5, or 6. However, you could also useany number between 4 and 6, inclusive, such as 4.5, 4.7, 5.2, etc. I'd advise against griding in non-integers whenever possible as it'll take longer, and there's a higher risk of making an error.

Jessica opened a bank account that earns 2 percent interest compounded annually. Her initial deposit was $\$100$, and she uses the expression $\$100(x)^t$ to find the value of the account after $t$ years.

Answer Explanation: The question told us that Jessica made an initial deposit of 100 dollars into her account, and the interest on her account is 2 percent compounded annually. We will use this given information and the compound interest formula to figure out how much money Jessica has after 10 years.

As I mentioned, when gridding in, you cannot include any units. In this case, you'd need to ignore the dollar sign—as mentioned in the question. 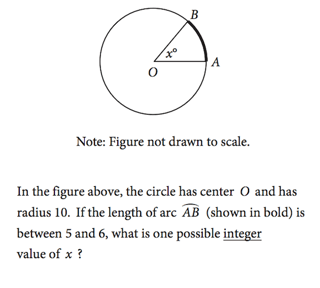 As I mentioned, when there are multiple answer possibilities, you must choose one to grid-in. This question explicitly asks you for only one possible integer value, so make sure you select either 29, 30, 31, 32, 33, or 34.

Grid-ins only appear in the SAT Math section at the end of the no-calculator and calculator sections. They require you to produce a response—no answer possibilities are provided for you. Remember these five key tips when answering this style of question:

Need additional help preparing for the SAT? Check out our ultimate SAT study guide. Taking the SAT soon? Learn how to cram for the test.

Unsure how to prepare for test day? Learn what to do the night before the SAT, and read the rules and regulation.

Our program is entirely online, and it customizes what you study to your strengths and weaknesses. If you liked this Math strategy guide, you'll love our program. Along with more detailed lessons, you'll get thousands of practice problems organized by individual skills so you learn most effectively. We'll also give you a step-by-step program to follow so you'll never be confused about what to study next.