Arguably one of the most prestigious public universities in the US, the University of Michigan is a fantastic choice for college, especially if you’re from Michigan. But what specifically should you know about UMich before applying here?

In this article, we go over the most important facts to know about UMich, from where it’s located and how selective it is to its student life and financial aid policy.

Hailed as one of the best public research universities in the US, the University of Michigan is a large institution with top-quality academics, accomplished faculty, and numerous research opportunities for students.

As a whole, U of M aims to help students become citizens and leaders who will challenge the world and what we know about it. The institution is known for its innovative research, diversity, hospitals, and athletic program.

So where is the University of Michigan located? There are a couple of answers to this.

As a statewide public university system, UMich is located in the cities of Ann Arbor, Flint, and Dearborn; however, we’re talking specifically about the University of Michigan, Ann Arbor here—that's the flagship campus of the system (and by far the most popular and prestigious).

Ann Arbor is a small city of around 120,000 people, located about 45 minutes from Detroit. The Ann Arbor, Michigan, campus is divided into a Central Campus and a North Campus. Whereas the former lies in the center of Ann Arbor, the latter sits 2 miles northeast (don’t worry if you've got classes on both campuses—free buses connect the two!). Altogether, the University of Michigan campus in Ann Arbor takes up 3,207 acres of space.

Ann Arbor is a relaxed college town, offering plenty of restaurants, independent bookstores, and museums, all within an easy walking distance from the university. 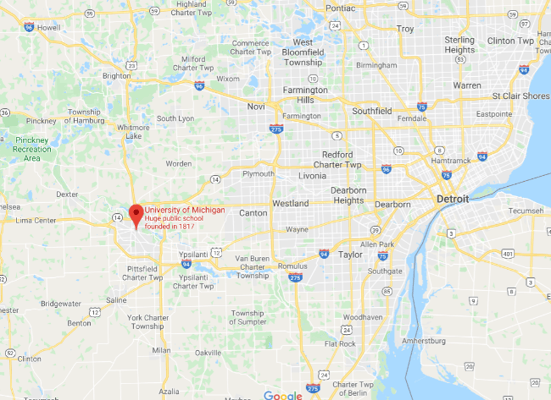 In total, the University of Michigan comprises 19 schools and colleges:


UMich is a large research university, with more than 30,000 undergraduates and 16,000 graduate students in attendance. Approximately 6,200 faculty members teach here as well.

An elite public institution, U of M is fairly tough to get into: the current University of Michigan acceptance rate is just 23%, indicating that only about one in five applicants gets admitted. Due to its prestige, the University of Michigan ranking is usually in the top 25 on most national college ranking lists.

Here’s a recap of what we’ve discussed about U of Michigan so far:

The overall outlook is very good for students of the University of Michigan.

In terms of the graduation rate, 92% of UMich students earn their bachelor’s degrees within six years. This is a high percentage, indicating that most students who start a program here will finish it within a reasonable time frame. That said, about 8% of undergrads will either take more than six years to get their degrees or will leave without completing their programs.

Student Life at the University of Michigan, Ann Arbor

As such a large institution, the University of Michigan never seems to run out of things for students to do, which is why students are generally very happy with their time here.

A whopping 97% of freshmen continue on at U of M for their sophomore year, showing that students are, generally speaking, extremely satisfied with their academic and social lives.

Part of this is likely due to the fact that most freshmen live on campus: according to the University of Michigan, although undergraduates are not required to live on campus, about 97% of freshmen do. After freshman year, most students choose to live off-campus.

In terms of undergraduate academic programs, there are 275 University of Michigan majors to choose from. When applying to UMich, you must first choose one of the 14 schools/colleges that give out undergraduate degrees before specifying your major (if known). As you can imagine, these majors span a huge array of fields, from art and math to cultural studies and public health. Popular majors include engineering, social sciences, computer science, biology, and psychology.

Despite the enormous size of the university, the student-faculty ratio is a solid 15:1, meaning that there are 15 students for every professor.

How is student life outside academics at UMich, though? Students can choose from among more than 1,600 clubs and organizations on campus. Whether you want to join a hobby club, a sports team, or a music ensemble, there’s something for everyone. Greek life is also very active, with about 6,000 students in sororities and fraternities.

Furthermore, sports as a whole are incredibly popular, especially football. Each year, the Michigan Wolverines compete at the NCAA Division I level in the Big Ten Conference. Ann Arbor is home to Michigan Stadium (nicknamed "The Big House")—the biggest football stadium in the country. U of M's biggest rival is Ohio State.

U of M Tuition and Financial Aid

That’s a huge difference in tuition for in-state and out-of-state students—around $36,000! But how do these prices compare to the averages for four-year public universities?

But for in-state students, costs can get super low as a result of the University of Michigan's special "Go Blue Guarantee," which aims to keep tuition affordable for Michigan residents. Per this policy, anyone whose family makes $65,000 or less per year is eligible for free tuition for four years. Even if your family makes more than $65,000, this policy can still cut costs dramatically.

Here's an overview of how much and what type of aid you can expect to get from the University of Michigan based on your family’s income (if you are a Michigan resident): 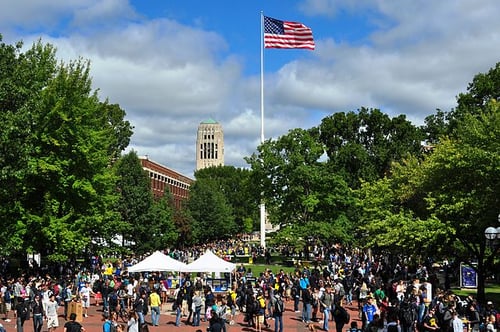 University of Michigan History and Alumni

In U of M's first year in Ann Arbor, there were just seven students and two professors. During these early years, much of the campus consisted of farmland. A fence had even been erected to separate the university cows from the city cows!

Over time, though, the number of students and faculty members began to grow. By 1866, UMich had become the biggest university in the country, with a total enrollment of 1,205 students. Four years later, women were officially allowed to enroll at the University of Michigan.

Many well-known figures have attended UMich. Here are some University of Michigan notable alumni you might recognize:

Resources for University of Michigan Applicants

If you plan to apply to the University of Michigan, then it's important that you know exactly what to do to raise your chances of getting accepted to this prestigious Public Ivy.

First, check out our University of Michigan admission requirements page to learn what GPA and SAT/ACT scores you'll need to get in order to be on par with other applicants. I also suggest looking at our guide to the top 20 public universities to get a sense of how UMich compares with other similarly esteemed institutions.

Then, as you get going on your application, refer to our tips on how to write stellar University of Michigan supplemental essays. These essays are very important to your application, so give yourself plenty of time to work on them and proofread!

Want to get into University of Michigan? We can help.

Learn more about PrepScholar Admissions to maximize your chance of getting into University of Michigan.