Why You Shouldn't Copy Skeleton Templates for the SAT/ACT Essay

Creating your own essay skeleton can go a long way towards helping you prepare for the SAT or ACT essay. Having an essay template ready to go before you take the test can reduce feelings of panic, since it allows you to control at least some of the unknowns of a free-response question. It can even be helpful to look at other people’s essay skeletons to get an idea what your own essay template should look like.

But when does using an essay skeleton go from a great idea to a huge mistake? Keep reading to find out.

In January 2021, the College Board announced that after June 2021, it would no longer offer the Essay portion of the SAT (except at schools who opt in during School Day Testing). It is now no longer possible to take the SAT Essay, unless your school is one of the small number who choose to offer it during SAT School Day Testing.

While most colleges had already made SAT Essay scores optional, this move by the College Board means no colleges now require the SAT Essay. It will also likely lead to additional college application changes such not looking at essay scores at all for the SAT or ACT, as well as potentially requiring additional writing samples for placement.

What does the end of the SAT Essay mean for your college applications? Check out our article on the College Board's SAT Essay decision for everything you need to know.

What Is An Essay Skeleton?

An essay skeleton, or essay template, is basically an outline for your essay that you prewrite and then memorize for later use/adaptation. Usually, an essay skeleton isn’t just an organizational structure—it also includes writing out entire sentences or even just specific phrases beforehand.

"But how can you do this, and more importantly, what’s the point?" I hear you cry (you sure manage to get out a lot of words in one cry).

Creating an essay template for the current SAT essay is pretty simple, as the SAT prompts tend to fall into one of six categories:

Because the prompts are, at the core, all "yes or no?" questions, you can somewhat customize your introduction and conclusion. Doing this is especially helpful if you tend to choke under pressure or are worried about your English language skills—you can come up with grammatically correct templates beforehand that you can memorize and then use on the actual test (filling in the blanks, depending on the prompt).

Formulating an essay template for the ACT is a little more tricky, as the new ACT essay asks you to read an excerpt, consider three perspectives, come up with your own perspective, and then discuss all the perspectives in the essay using detailed examples and logical reasoning. It’s possible to come up with a useful template, but I’ve not really come across any students using templates in the 200+ ACT essays I’ve graded.

In addition to figuring out your essay organization beforehand, you can look up synonyms for words that get commonly used in essays (like “example” or “shows”) and prewrite sentences that use these words correctly. For example, for the SAT essay, you could pre-write a way to introduce your examples: “One instance that illustrates [x] can be found in [y]" (where [x] is the point you're trying to make and [y] is the place from which you're taking your example).

Finally, on a semi-related note, because you know that you’ll have to use examples to explain your reasoning on the essay, you can also come up with the examples you’ll use beforehand and get good at writing about them. The better you know your examples, the more organized your writing will be on the essay (because you won’t have to waste valuable time trying to think of what exactly happened in The Hunger Games that proves your point). For more on this, see our article on the 6 examples you can use to answer any SAT essay prompt.

So What’s The Issue?

Problems occur when you rely on other people's skeletons, rather than coming up with your own. In theory, there’s nothing wrong with looking at other people’s essay skeletons to help inform your own—in fact, I've even written up a helpful template on this blog for SAT and ACT essays. The issue arises when you move beyond using the organizational aspects of someone else’s skeleton to copying words directly from someone else. 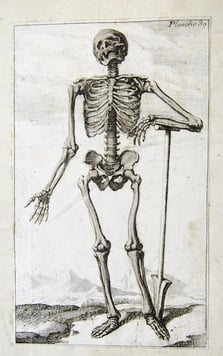 Skeleton - French anatomical engraving by University of Liverpool Faculty of Health & Life Sciences, used under CC BY-SA 2.0/Cropped from original.
You did whaaaaaaaaaaaaaaaat?

Out of the 600+ SAT essays I’ve graded over the last three months, I’ve seen the same essay skeleton come up 7 times. I know that it’s an essay skeleton because the key phrase repeated from essay to essay (“critics are too dogmatic in their provincial ideology”) was so unusual (and kind of grammatically incorrect) that I commented on it specifically the first time it showed up (to point out vocab misuse...because it just wasn’t good writing) and Googled it the second time it showed up.

It turns out that this phrase is from an SAT prep skeleton (we're not going to name the book or the author), but it also shows up in various essays around the internet that either copied that prep book or copied a College Confidential posting that plagiarized the book, so I don't know where exactly students were seeing this skeleton.

Here's the problem: while the idea of using essay skeletons makes a lot of sense, and even the using of some organizational aspects of another essay skeleton is acceptable, word-for-word copying of sentences is considered plagiarism, and plagiarism is not permitted on the SAT. In fact, it's specifically addressed in the SAT Terms and Conditions.

I sent a message to the CollegeBoard asking about the use of essay skeletons and what, exactly, was considered plagiarism. The language used to describe it in the terms and conditions is pretty vague, and I wanted to know if, for instance, a certain number of words had to appear in a row for something to be considered plagiarism. The response I got back only contained the relevant text from the Terms and Conditions:

“ETS reserves the right to dismiss test-takers, decline to score any test, and/or cancel any test scores when, in its judgment, as applicable, a testing irregularity occurs, there is an apparent discrepancy in a test-taker's identification, an improper admission to the test center, a test-taker engages in misconduct, or the score is deemed invalid for another reason, including, but not limited to, discrepant handwriting or plagiarism.” [bolding mine]

Basically, if the CollegeBoard thinks you’re plagiarizing, then they can cancel your SAT score. And because the CollegeBoard does not define plagiarism, they basically have the latitude to do one of those “I know it when I see it” standards with things like essay skeletons. Chances are that you won't get marked down for the essay (other than for using vocab incorrectly), but since the template is so common, why risk it? Take an hour to develop your own template. You'll end up with even better results since you crafted it yourself and will be able to use it with more precision.

So what is plagiarism? There's the Google definition, which says plagiarism is taking the work or idea(s) of someone else and not crediting them/presenting it as your own work or idea(s). Plagiarism is generally considered ethically wrong, and in many cases (including with the SAT), it can have real world consequences.

You might have read that the writer of the essay template gave permission to reuse the template, and that makes it OK. This is 100% false. Consider this scenario: you're in high school and you're taking AP English. Your brother had the same teacher the year before, and he got As on all his essays. For whatever reason, he gives you permission to reuse his essays in your class. Does that count as plagiarism? 100%. There's no question about it. Your teacher and school don't care whether the writer gave you permission or not. You copied the essay, and that is an ethical lapse that is entirely on you. You'd probably fail the class and/or face whatever other punishment your school has as policy.

What Does This Mean For My SAT/ACT Essay?

Obviously, using the same word, or even the same couple of words in a row, as someone else isn't plagiarism (otherwise there would be lots of controversies over people using the two words “of the” together all the time and not citing their sources). A good general rule to follow is to avoid copying more than four words in a row.

I’ve seen several essays since that begin with the phrase “The presupposition that,” which is fine, because it’s a phrase anyone could come up with to describe an assumption, and is relatively short (3 words). The phrase “these romantic critics are too dogmatic in their provincial ideology,” on the other hand, is problematic because

When it comes to preparing for the SAT or ACT essay, it's much better to rephrase in your own words and create your own skeleton. You can (and even should) look at other people’s skeletons/essays for tips, but you should never copy someone else's work word-for-word without making it clear that it's someone else's work.

Want more in-depth essay articles? You’re in luck! We’ve got step-by-step examples of how to write both the SAT and ACT essays,  as well as detailed advice for how you can get a perfect 12 on the SAT essay.

Reading articles is all very well and good, but how can you get feedback on your practice essays? One way is through trying out the PrepScholar test prep platform, where intrepid essay graders (like myself) give you custom feedback on each practice essay you complete as part of our program.