Which Measures IQ Better, ACT or SAT? What Does That Mean for Which to Take? Does the ACT or SAT measure intelligence better? What does this mean about which test you should take?

One way to define IQ is the ability to solve problems based on given information. Here, we look at whether the ACT or SAT is more related to IQ (spoiler: there is an answer!) and what this means for your test-taking strategy.

To make sense of the results presented below, let's start with some key terms and definitions you should know.

IQ has a number of different technical definitions, none of which change the conclusion of this article much. For this article, we'll use the definition of IQ that's easiest to digest: IQ is the ability to solve problems based on given information.

A key phrase here is given information. Someone with a high IQ, if given a series of numbers, can probably find the next number in the sequence. At the same time, someone with a high IQ might not know how to change the oil in a car as this is learned information (we go over this phrase in more detail below).

IQ tests generally don't test you on learned information. Thus, having a high IQ doesn't necessarily guarantee that you'll be able to quote Robert Frost, recite the order of the planets, or define a trapezoid — all of that is learned, not given, information!

You've probably already guessed the meaning of this based on the definition of IQ above. Simply put, learned information is information you must learn in order to know how to solve a problem or answer a question.

This includes the bulk of what's taught to you in school. So if you've ever had to memorize anything, that's learned information. For example, when you learned how to do long division, that would be learned information since you wouldn't know how to approach that type of division problem without first learning what long division is and how to use it.

By contrast, given information means that you should theoretically be able to solve a problem based only on the information given to you.

SAT vs ACT: How Questions Test (or Don't Test) IQ

At this point, it's worth noting that both the ACT and SAT are designed to test a combination of IQ and learned information.

You need IQ because both tests have difficult questions that require innate intelligence. You also need learned information because you can't do well on either test without having memorized specific concepts, such as math formulas and grammar rules.

So what are some differences between the ACT and SAT? And how do these differences affect their manner of testing IQ?

In the past, the SAT relied more on "tricks" for difficult questions. However, since the test's 2016 redesign, it's a lot more similar to the ACT — and thus less tricky. In other words, you should be able to do reasonably well on the SAT as long as you know when and how to utilize the learned information taught to you in school.

Here's an example of an SAT Math question that requires outside information to solve it: 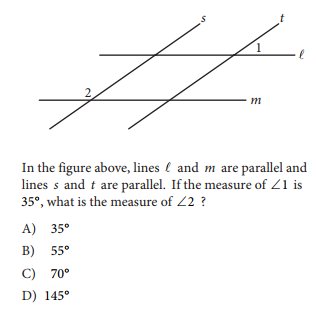 As you can see, there are no tricks or ambiguous words here; the question is clear and easy to understand. But you can't answer it without knowing the rules of angles — concepts you should have learned in geometry class.

According to these rules, when a set of parallel lines intersects another set of parallel lines, some angles will equal the same values, and others will add up to a sum of 180 degrees. Knowing this outside information allows you to answer the question both quickly and correctly.

While you can try to use only given information to solve this problem, it won't be as effective as using learned information. For example, you could venture to guess the measure of ∠2 by looking at the diagram alone; however, this isn't a particularly good strategy since math diagrams aren't always drawn to scale.

Like the redesigned SAT, the ACT is often made easier if you know some outside information (i.e., learned information).

With these questions, you can always find the right answers by carefully reading and analyzing the experiment data (not included in the above example).

However, by using a little bit of learned information, you'll be able to answer this question in even less time. If you remember chemistry class well enough, you can immediately eliminate three answer choices — water, iodine, and neon — as these are not elemental liquids that can usually be collected in a beaker.

So Is the ACT or SAT More Related to IQ?

You might have been coming to the right conclusion yourself as you read this. But in case there's any doubt, the answer is this: both the SAT and ACT give a nearly identical amount of credit to learned information. As we saw above, both the SAT and ACT have similar questions for which you can (or must) use learned information in order to solve. As a result, neither test appears to test IQ more than the other does.

However, this isn't the same conclusion we'd get if we were to instead look at the pre-2016 SAT. Unlike the new SAT, this version of the test had more tricks and puzzles, meaning it tested given information more often than the ACT did. Thus, we can say that the old SAT was clearly more of an IQ-based test than the ACT (and new SAT) is.

In fact, a rigorous peer-reviewed study performed by Frey and Detterman came to this conclusion, too. This study took a large number of students and looked at their real IQs, old SAT scores, and ACT scores. Both the ACT and old SAT were highly correlated with IQ, but the SAT took first place by a good margin (88% versus 77%).

What Does This Mean for Test Takers?

In the end, it doesn't really matter whether you take the SAT or ACT. Both tests structure their questions similarly, and both offer questions you can answer more quickly or more efficiently using learned information. Neither test is particularly geared toward those who are classically "higher in IQ" or "better in class than on test" types.

That said, there are other reasons you might want to consider taking one test over the other, such as test date options or how strong you are in science. So before you register for the SAT or ACT, be sure to figure out which test is right for you. You might even end up taking both!

How are the SAT and ACT similar to each other? How are they different? Read our detailed breakdown of the two tests to learn exactly what makes them unique.

Will you do better on the SAT or ACT? Our guide goes over the steps you must take to figure out which test better suits your strengths.

Want to know how an SAT score translates to an ACT score and vice versa? Input your scores in our conversion charts to see!