5 Excellent Reasons Not to Fear the Garden Spider

Have you noticed a large black and yellow spider making its home in your yard? This species is commonly known as the garden spider, and they are widespread throughout North America. Should you be concerned about you or your pet being bitten by a garden spider? Are garden spiders poisonous? On the contrary, garden spiders are a beneficial garden inhabit and are key to keeping insect populations down. Read this guide to learn more about this striking spider species and their unique characteristics.


What Are Garden Spiders?

The most distinctive feature of garden spiders are the black and yellow markings that often appear as bands or spots across their abdomen. Only female garden spiders have these colors though, along with a white or gray cephalothorax (front part of the body). Males are significantly smaller, with a thinner abdomen, and have a duller red-brown color. Females range from 0.75 to 1.1 inches (19 to 28mm) long, while males are about a quarter the size of females: 0.20 to 0.35 inches (5 to 9mm) long. Like all spider species, garden spiders have eight legs (in four pairs) and multiple small eyes. Because of their larger size and bright colors, female garden spiders are noticed much more often than male garden spiders.


Where Do Garden Spiders Live?

Black and yellow garden spiders have a wide range. They’re native to North America and are found in every US state except Alaska. Their range also extends to northern Central America and southern Canada.

Garden spiders prefer to live near sunny, grassy areas that are out of the wind so that they can build their webs. They typically build their webs on tall plants or low buildings. This is why they are found so often in gardens! Tall grasses, shrubs, even the eaves of houses are all ideal places for garden spiders to live. These spiders are active during the day, and they can often be found on or near the webs they build.

If you see a garden spider, don’t worry about being bitten by it. Garden spiders aren’t aggressive, and they’ll leave you alone as long as you don’t bother or provoke them. In the rare cases that garden spiders do bite, you still don’t need to worry. Garden spider venom isn’t poisonous, and the bite will feel similar to a bee sting, with only minor pain and swelling. This is true for both humans and animals, so you don’t need to worry if your dog or other pet is bitten by one of these spiders.

The only people who need to worry about getting bitten by garden spiders are those who are allergic to the spider’s venom, but this is very rare. If the bite or other parts of your body (such as your face) become very swollen or you have trouble breathing, call 911 or get to an emergency room immediately.

Despite some articles explaining how to get rid of garden spiders, they are a harmless and often interesting addition to yards and gardens. In the next section we explain how garden spiders can even benefit you!

Want to know more about garden spiders? Below are some of the most important and interesting facts to know about this species.


What Do Garden Spiders Eat?

Not only are garden spiders harmless, they can help make your garden a more enjoyable place to be! Garden spiders eat insects, including many common pests like mosquitoes and wasps. Garden spiders trap their prey by spinning webs that the insects fly into. They don’t chase or hunt their prey (so any stories about garden spiders chasing after humans are false).

Insects make up the majority of a garden spider’s diet, but they may also eat slightly larger prey, such as small lizards, if they get caught in the spiders’ webs.

Garden spiders are known for having large, intricate webs. The webs can be up to two feet across and are circular in shape. They have the classic spiral rings and radial lines that most people envision when they picture a spider web. Their webs often have a distinctive zigzag of silk running through the center, known as the stabilimentum.

Female garden spiders typically build much larger webs than male spiders. Once the web is complete, the spider will often sit in the middle of it, waiting for prey to fly into the web. Garden spiders will use the same web for several months, maintaining it as needed each night. However, they may build new webs more often if they decide to move locations or the web is damaged. 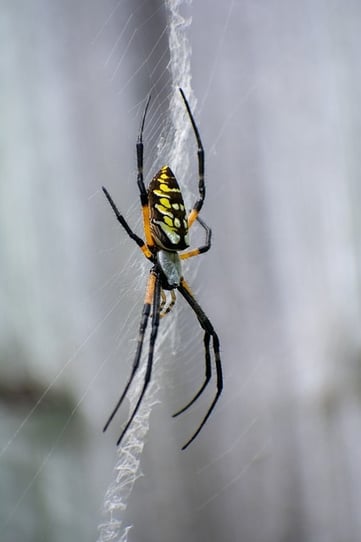 How Long Do Garden Spiders Live?

Garden spiders live, on average, for one year, although some females can live for several years if they live in areas that don’t have hard frosts (a frequent killer of garden spiders). Garden spiders typically spend their entire lives in one area, so your yard may be the site of an entire garden spider life cycle!


How Do Garden Spiders Reproduce?

Garden spiders reproduce one to two times a year. The male garden spider dies immediately after mating and is sometimes eaten by the female. After mating, the female lays several thousand eggs which she covers in brown silk. The eggs hatch in the spring or fall, and the baby garden spiders (the vast majority of which won’t survive to adulthood) either stay in the area or get carried by the wind to new places.

Even though they may look frightening, black and yellow garden spiders are actually a harmless, and sometimes even beneficial, addition to your yard. The garden spider, officially known as Argiope aurantia, is a widespread spider species that is nonaggressive. Even if a human or animal is bitten by one of these spiders, the reaction will only be similar to that of a bee sting, with minor swelling and pain.

The garden spider web is often large and intricate, and it’s one of the most obvious signs that this spider is living in your yard. Female garden spiders are the only ones with the bold black and yellow coloring, and the species eats primarily insects, including many pests that frequent gardens. They play an important role in the ecosystem and keeping insect populations down, so there’s no need to worry if one of these spiders makes its home in your garden!