The Epic History of Garden Gnomes From Ancient Rome to Today 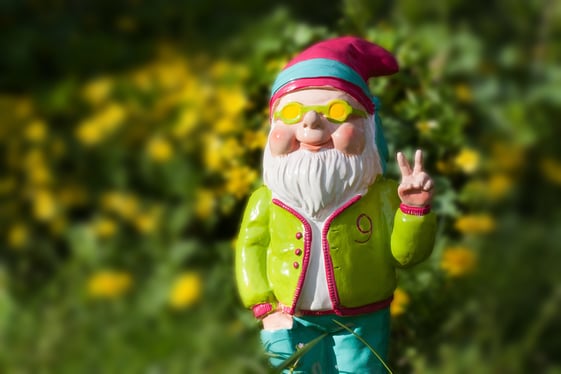 Garden gnomes. They might be your favorite decoration or your biggest pet peeve. Garden gnomes are small ornamental statues, typically resembling humans. Garden gnomes have been the subject of cultural fixation, reverence, and scorn, but have stayed an essential part of garden decor and more, even as debates raged about their purpose and pranksters tried to snuff them out. No matter what side of the garden gnome debate you’re on, learning the garden gnomes history is fun and enlightening.

What Are Garden Gnomes?

Today, garden gnomes can also portray popular figures or stereotypes. Biker gnomes, for example, have the traditional pointy hats and bears but also wear leather vests. There are a lot of ways to be creative with gnomes. They can be depicted doing different activities, and can have signs, plaques, or props to accompany them.

Garden gnomes are modeled after gnomes, small, mythical creatures whose folklore arose during the Renaissance in Europe. Gnomes appeared prominently in Romanticist art and fairy tales as humanoid creatures that lived deep in the forest, primarily underground, and resisted contact with humans. In stories, gnomes sometimes protected and guided humans when they did come in contact with them, and sometimes had magical abilities. In some darker fairy tales of the period, gnomes led humans to their demise by tricking them.

The History of Garden Gnomes

How did these little guys wind up in gardens, you ask? Well, first we have to take a little step back to ancient Rome, where the history of the garden gnome begins.

Garden statues have always been popular. Ancient Romans placed statues of the fertility god Priapus in their gardens, to help the plants grow and flourish. During the Renaissance and the Romantic period, people also placed status in their garden of figures like hunchbacks, which they called "grotesques." Art influenced these decisions, as people modeled their decor after the culture of the day.

In the 18th century, people began adding small gnome-like figures made of wood or porcelain inside their homes. They referred to these figures as "gnomes," inspired by fairy tales. In Germany, the fairy tales further inspired the production of the statues, as people conflated the myths and folklore with the figurines. 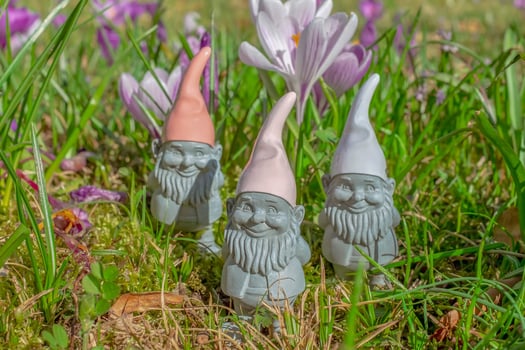 Because the traditional gnome lived in a forest and was associated with the Earth, people began putting the gnomes in their gardens as well. The appearance of garden gnomes varied by region depending on that region's folklore, so the gnomes sometimes appeared jolly, or older and more human depending on the region. Around this time, garden gnomes took off in Europe and were primarily found in the gardens of the wealthy as a symbol of fashion and status.

In 1847, Lord Charles Isham brought 21 terracotta garden gnomes to his home in Northamptonshire to be featured in the garden. Only one of the gnomes, nicknamed Lampy, survives to this day and is on display at the estate. Isham effectively brought gnomes to England and made them fashionable for the upper classes, a major turning point in garden gnome history.

Sir Frank Crisp owned the second largest collection of garden gnomes in England, and opened his estate up once per week between the years of 1910 and 1919 to the public so people could view his garden and garden gnome collection. As gnome demand grew, manufacturers in Germany flourished. This meant that cheaper options for gnomes were available, and they were also displayed in the gardens of people from all socioeconomic classes.

Garden Gnomes in the 20th Century

The aftermath of World War I was particularly hard on Germany, whose garden gnome manufacturers were met with little demand for ceramic figurines and had very little resources. Garden gnome popularity greatly declined at this time, but the history of garden gnomes wasn't over yet.

Some garden gnome manufacturers recovered in the 1930s after the release of Snow White and the Seven Dwarves. They found that there was newly renewed interest in garden gnomes, and the appearance of the garden gnomes was "Disneyfied" to reflect the cartoon-like innocence  of the animated dwarves. However, the garden gnome industry declined again during and after World War II, as time and resources were devoted to the war effort.

In the 1970s, gnome-makers began producing novelty gnomes, and modeled them after politicians, celebrities, or other popular figures. Gnomes were mass-produced, cheap and readily available. Since they were so cheap and since they were produced in jokey form, they lost a lot of the artistic and whimsical reputation they once had.

In the 1990s, garden gnomes re-captured public attention when a group of pranksters in France, called the Garden Gnome Liberation Front, gained fame for stealing gnomes, taking them traveling, and sending pictures back to the owners, or simply taking the gnomes and leaving them in allegedly funny situations for people to find. Often, the garden gnomes are given signs claiming that they wanted freedom, or that they had other motives for "escaping."

Some thieves returned the gnomes, and others collected large groups and then set them up in scenes in public spaces. The goal of the GLF was to "free" the gnomes, but many owners of these gnomes were incredibly upset that their gnomes disappeared. Some unofficial gnome liberation groups still operate, though the original group in France was caught and fined. 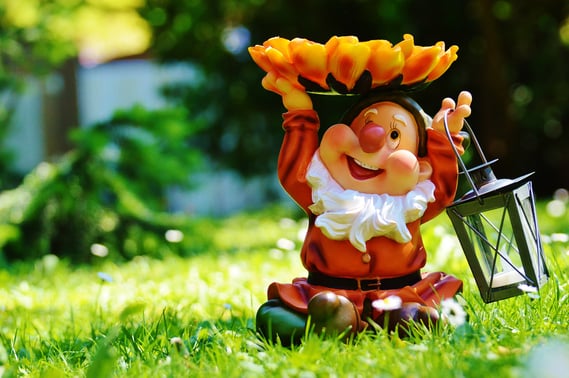 Yard gnomes have appeared in popular culture regularly over the past few decades, though they don’t necessarily decorate gardens the way they once did.

The World of David cartoon aired on Nick Jr. in the 1980s and featured a gnome named David who lived in the forest. The Goosebumps series featured a gnome as a villain in both the book and show, which is a possible pre-requisite to the zombie and horror gnomes that we still see today.

Travelocity also used a gnome in their ad campaign starting in the early 2000s, as the gnome traveled the world. This was shortly after their height of the garden gnome liberation thefts, all of which personified the gnomes, showing them with voices and personalities, and going on adventures. This friendly attitude toward garden gnomes had always been there, but the more human the gnomes became, the more actual humans became attached to them.

German artist Otto Horl displayed an art installation of 1,250 garden gnomes posing in Nazi salutes in 2009. Though controversial, this did further the viewpoint of lawn gnomes being personified and having a purpose, names, etc.

Halloween gnome costumes became popular as people dressed up as gnomes and crossed into other depictions and themes, like Gnome Chomsky, modeled after linguist and philosopher, Noam Chomsky. The Netflix series Trollhunters even includes a character named Gnome Chompsky.

Making a costume out of a gnome version of something became popular, and helped repopularize novelty gnomes for a time. The animated movie Gnomeo and Juliet was a take on the classic Romeo and Juliet, and incorporated many Gnome-themes like forests and gardens into the lives of the gnome families.

Despite their early history as exclusive decorations for the wealthy and powerful, garden gnomes today rarely have the same status and are sometimes even viewed as “tacky.” The Chelsea Flower Show famously banned gnomes until 2013, and permitting them at the show was considered a highly controversial move since it "degraded" the gardens. However, those who complained about the lawn gnomes received significant backlash, and were accused of being snobbish, since garden gnomes are common in middle and working class homes.

This debate has been going on for most of the history of garden gnomes, which is part of why gnomes gained and lost popularity repeatedly throughout the years. Also, due to their humanoid appearance, garden gnomes seem to be a target for humans to want to put them in funny situations, like in Travelocity’s ad campaign. Funny videos of gnomes doing human activities like “directing traffic” can sometimes go viral.

Today, gnomes are known for being funny rather than dignified. There are still serious collectors of garden gnomes, but they aren't necessarily serious gardeners—hence the view of some gardeners that gnomes are a novelty, not a garden piece. Ultimately, it's up to an individual to decide if they want to include a garden gnome in their home. Some people today make elaborate “fairy gardens” and create a whimsical space in which to place their gnomes. Others add a gnome for a humorous touch.

Garden gnomes, however, you feel about them, have long been a part of gardening culture. While gnomes may never have a totally secure place in gardens, they are clearly here to stay and hopefully looking forward to the next step in their colorful lives.

Looking for more fun history? Check out these true stories about David Ghantt and Aleister Crowley, and this post on 1920's Fashion.

If you are looking for exciting, unique ideas for your next research paper, check out our list of 113 Great Research Paper Topics, and 113 Persuasive Essay Topics. You can read our narrative essay and argumentative essay examples!