Oftentimes, if I make an outlandish comparison, someone will turn to me and say, "You can't compare apples and oranges, Alex."

Grammatically speaking, however, you absolutely can compare apples and oranges—they're both fruits! However, it's true that some comparisons are nonsensical, like a comparison between apples and eating apples.

You Can Only Compare Equivalent Things

An illogical comparison occurs when a sentence compares two things that aren't of the same type:

Jimmy’s restaurant has more customers than Bob does.

Even though it might seem fine, this sentence is comparing "Jimmy's restaurant" with "Bob," which makes no sense. In order to correct it, we have to alter the wording so that the two things being compared are the same type of thing:

This sentence, though correct, sounds pretty repetitive. To streamline it, we can drop the second "restaurant":

Jimmy’s restaurant has more customers than Bob's does.

It's still clear that we're comparing Jimmy and Bob's restaurants, but in a way that's not as redundant sounding. Depending on the sentence's construction, it may also be correct to substitute "that" or "those" for the second noun (as long as it's the same as the first one):

I prefer the novels of J.K. Rowling to those of Stephenie Meyer. ("Those" takes the place of "the novels.")

Though they look the same on most maps, the size of Alaska is actually twice that of Texas. ("That" takes the place of "the size.")

The first key rule is that you must compare people to people and things to things.

The second rule is that you can't compare something of specific type to all things of that type.

This rule may sound strange, but it doesn't make sense to compare one person with everyone—you would compare them with everyone else. You can't compare something with a group that includes that thing without specifying that you're talking about everything else in the group. Let's look at an example:

Incorrect: A cheetah is faster than any land mammal.

Correct: A cheetah is faster than any other land mammal.

Pay attention to exactly what the sentence is saying—it's easy to extrapolate the intended point and miss the error in the wording. Keep this SAT writing strategy in mind! 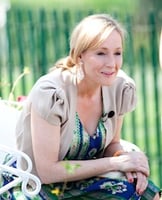 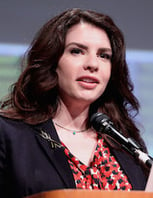 You can compare authors to authors and books to books but not books to authors. (Image credits: far left, Daniel Ogren; left, Gage Skidmore)

How to Approach Illogical Comparisons on the SAT

Illogical comparisons questions appear relatively frequently on the SAT writing: you are likely to see one or two of them, especially since they can appear in both Identifying Sentence Errors and Improving Sentences questions.

Luckily, illogical comparisons generally appear in very similar ways, so there are just a couple of clues that you need to watch out for because they will often signal a comparison issue:

Practice looking for these clues on every SAT writing question until it becomes second nature.

Unlike most of the grammatical issues that show up in Identifying Sentence Errors (ISE) questions, illogical comparisons are hard to spot by just checking underlined words. Instead, as I mentioned above, you’ll need to keep an eye out for words that signal a comparison (like/unlike, as, than) and full names of individuals.

If you see a comparison that you think might be faulty there are three steps you need to take:

Let’s go through this process on a real SAT question:

As with all ISE questions, the first step is to read the sentence. In this case, you should notice the clues "writer Sigrid Undset" and "like," which indicate that there may be an incorrect comparison.

Are there any underlined nouns? Yes, both C and D include a noun. It's not immediately obvious which is involved in a comparison, so let's move on.

What is being compared? Now the questions gets a bit trickier—the first part of the sentence, "Norwegian writer Sigrid Undset is like the novelist Sir Walter Scott," includes a comparison, but neither of our two underlined nouns. Plus, it's definitely correct, since it compares two people.

However, there's another comparison in this sentence, "unlike his books," which does include an underlined phrase. So what's being compared with "his books"? "Unlike his books" is a modifier describing "she," which refers to Sigrid Undset.

Are the two things equivalent? The comparison is between Sigrid Undset, a person, and Sir Walter Scott's books, things, so this is an illogical comparison. C is the correct answer—"his books" should be replaced with "him."

This is an especially tricky question because of its complicated sentence structure (C is actually a faulty modifier as well), but following these steps will allow you to break down even the most complicated constructions. Let's move on to illogical comparisons in Improving Sentences.

Illogical comparisons appear in much the same way in Improving Sentences as they do in ISE, so you'll need to keep an eye out for the same clues: full names of people and comparison words.

Once you've determined that there's likely an illogical comparison, follow these steps:

This process may seem confusing, but it's actually quite simple in practice. Let's try it out on an official SAT question:

After reading the sentence, you should notice the clue word "than," which indicates that this likely an illogical comparisons question.

What, if anything, is wrong with the comparison? The sentence is comparing "the mass of its tiny body" with "humans." This is an illogical comparison—you can't equate the mass of something with a human. The comparison should be between the mass of an insect and the mass of a human. We can eliminate A.

Rule out answers that make the same mistake. Answer choices C and D contain the same error: C merely tweaks the word order and D replaces the singular "human" with the plural "humans," which is actually even more wrong since the comparison is with a singular insect's body mass. Answer E seems to fix the problem by adding "body," but it's still not correct to compare a human body with the mass of an insect body.

Pick between the remaining choices. The only answer that's left is B, which correctly compares "the mass of its tiny body" and "that of a human's body." B is the right answer.

As a review, the list below includes the main ideas we've covered in this article and some helpful tips for using them on the SAT Writing.

Clues to watch for:

I've created some SAT Writing practice questions to help you get the hang of recognizing and understanding illogical comparison questions. Check them out below and send any questions my way in the comments!

1. Michel Foucault's theories about (A) the function of power in society are (B) radically (C) different than most philosophers (D). No error (E)

2. The British Library has more books than the books in all of the world's libraries.

A. the books in all of the world's libraries.

B. all of the world's libraries.

C. the books in any of the world's other libraries.

E. any other library in the world.

3. Throughout (A) history, many artists have been (B) more famous for their life stories than (C) for their work (D). No error. (E)

4. Although we often think of cheetahs as the fastest animals in the world, the speed of a peregrine falcon is actually greater than it.

A. the speed of a peregrine falcon is actually greater than it.

B. peregrine falcons are actually faster than them.

C. the speed of a peregrine falcon is actually greater.

D. peregrine falcons are more fast than those other animals.

E. greater yet is the speed of the peregrine falcon.

Since illogical comparisons are errors in sentence structure, they're similar to issues with parallelism and faulty modifiers. Consider taking a look at our grammar guides on those topics.

If you're planning to take the SAT next year, make sure to check out our guide to the redesigned SAT.

Maybe you're more concerned about the essay? In that case, take a look at our guides on how to score a perfect 12, how to plan your examples in advance, and 15 ways to improve your score.

For more big picture strategies, try these 8 key tips or check out our guide to reaching an 800 on the SAT Writing.