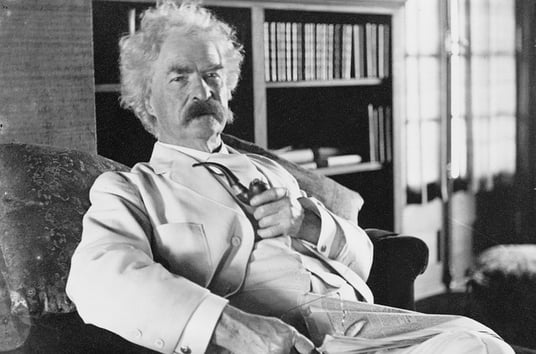 Mark Twain has been a household name since the nineteenth century. Known for the bestselling adventures of Huckleberry Finn and Tom Sawyer, Twain has also gained popularity for the pithy words of wisdom he shared.

Mark Twain grew up in the town of Hannibal, Missouri, which was the setting of both Huckleberry Finn and Tom Sawyer.

Before he became a renowned author, Twain was an apprentice to a printer, then went on to be a typesetter for a newspaper company owned by Orion Clemens, his older brother. Twain attributed his later success in journalism and writing to his experiences working in mines and on riverboats.

Christened by William Faulkner as “the father of American literature,” Twain authored some of the most popular works in American history, including A Connecticut Yankee in King Arthur’s Court, The Adventures of Tom Sawyer, Adventures of Huckleberry Finn, and more.

"If you tell the truth, you don't have to remember anything."

According to Mark Twain's quote on honesty, telling the truth saves you from the stress of having to remember the lives you’ve told. Life is easier, the air feels fresher, and stress melts away if you live your life simply and honestly.

"Whenever you find that you are on the side of the majority, it is time to pause and reflect."

In this quote, Mark Twain examines the value in swimming against the current. According to Twain, people that refuse to conform with the crowd become leaders, while others are followers. The quote asks the reader to consider: why stay with the crowd? What can be gained? What can be lost?

"Loyalty to petrified opinions never yet broke a chain or freed a human soul in this world — and never will."

Like the previous quote, this quote highlights the futility of staying loyal to a thought or opinion that doesn't make sense. In fact, Twain goes so far as to say that sticking to ideas held in the past actively prevents progress.

"You can't depend on your eyes when your imagination is out of focus."

"A Connecticut Yankee in King Arthur's Court" by Mark Twain

This quote highlights the idea that your eyes are fallible: they’ll see what they want to see. If you want to see something, you’ll see it, even if it’s not already there. 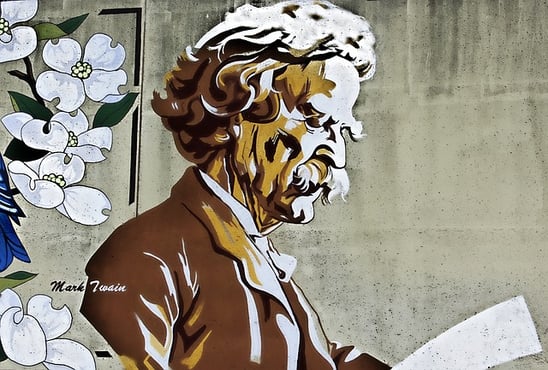 "The best of us would rather be popular than right."

"No. 44, the Mysterious Stranger" By Mark Twain

This Mark Twain quote calls out one of humanity’s biggest faults: most of us would rather be beloved than correct. That desire for acceptance and appreciation drives us more than anything else.

"Concerning the Jews" by Mark Twain

This quote by Mark Twain highlights the writer’s view of prejudice. Twain indicates that all he cares about is whether or not someone is a human being. Nothing else matters.

"To promise not to do a thing is the surest way in the world to make a body want to go and do that very thing."

"The Adventures of Tom Sawyer" by Mark Twain

This quote highlights a well-known conundrum: nothing makes you want to do something like being told you can’t do it.

"I must have a prodigious quantity of mind; it takes me as much as a week sometimes to make it up."

"The Innocents Abroad" By Mark Twain

Here, Twain highlights his tendency towards procrastination. He’s not the only one who avoids decision-making!

"Travel is fatal to prejudice, bigotry, and narrow-mindedness, and many of our people need it sorely on these accounts. Broad, wholesome, charitable views of men and things cannot be acquired by vegetating in one little corner of the earth all one's lifetime."

"The Innocents Abroad" By Mark Twain

According to Twain, travel is the antidote for prejudice. When you see the world, you can’t help but open your eyes to different kinds of people.

“It liberates the vandal to travel — you never saw a bigoted, opinionated, stubborn, narrow-minded, self-conceited, almighty mean man in your life but he had stuck in one place since he was born and thought God made the world and dyspepsia and bile for his especial comfort and satisfaction.”

This quote follows a similar train of thought as the previous quote: travel helps people learn about and appreciate other peoples and cultures.

As a famed writer, it’s not surprising that so many of Mark Twain’s sayings have made it to present day. Did we include your favorites? Let us know in the comments.

Not sure what literary devices are or how to use them? Here are some in-depth posts on imagery, assonance, point of view, and personification that define these important terms and show you how to find them in literature.

Learning to interpret poetry? Luckily, we have great resources for you! Check out this post that walks you through a complete analysis of the poem “Do not go gentle into that good night.”