What Is a Vacuole? Understanding the 4 Main Functions 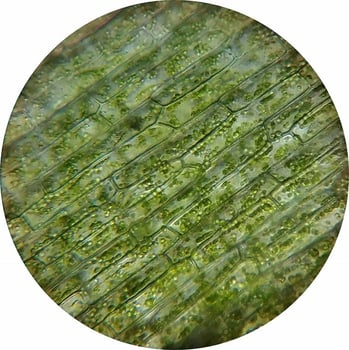 What is a vacuole and what does it do? A vacuole is a structure found in animal, plant, bacteria, protist, and fungi cells. It’s one of the largest organelles found in cells, and it’s shaped like a large sac. Vacuoles have a simple structure: they are surrounded by a thin membrane and filled with fluid and any molecules they take in. They look similar to vesicles, another organelle, because both are membrane-bound sacs, but vacuoles are significantly larger than vesicles and are formed when multiple vesicles fuse together.

What does the vacuole do? The main function of vacuoles is to hold various substances and molecules; they basically act like the storage unit of the cell. Below are some key vacuole functions, many of which relate to storing materials that the cell will need later on or which can damage the cell and therefore need to be removed:

However, the precise functions of a vacuole depend on the type of cell it’s in. In the following sections, we go over additional functions vacuoles can have, based on whether they’re located in animal, plant/fungi, bacteria, or protist cells.

Structure and Function of Vacuoles in Animal Cells

Vacuoles in animal cells mostly store substances; they aren’t needed as much for breaking down substances because lysosomes, another organelle in animal cells, do that. Animal cell vacuoles are typically small, and each cell can contain multiple vacuoles. Vacuoles can store different substances depending on the type of cell they are in. For example, in fat cells, vacuoles will often store large amounts of lipids.

Vacuoles in animal cells also help with the processes of endocytosis and exocytosis. Endocytosis is when substances that can’t passively move through the cell membrane are actively transported into the cell. These substances can include anything from nutrients to toxins to cell debris. Exocytosis is the opposite; it’s the process of actively moving molecules out of a cell.

During these processes, the vacuole is where the substances are stored or broken down before/after they are moved into/out of the cell. 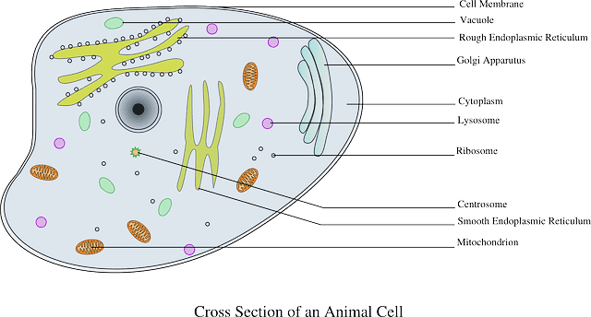 Structure and Function of Vacuoles in Plant and Fungi Cells

Unlike animal cells, plant cells typically contain only one vacuole per cell (often referred to as a “central vacuole”), and the vacuole they contain is much larger than those in animal cells. Plant cell central vacuoles take up an enormous percentage of the cell, sometimes over 90% of cell space, although 30-50% is more common. 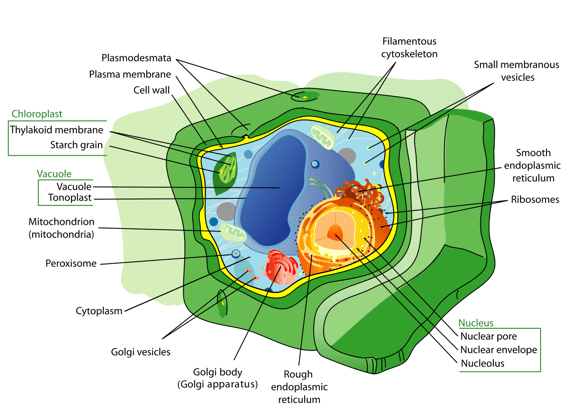 In this image, you can see how much larger the vacuole (large blue structure) is in a plant cell compared to an animal cell. Source: Wikipedia commons

Structure and Function of Vacuoles in Bacteria Cells

Not all types of bacteria have cells that contain vacuoles, but for those that do, they are mostly used for storage. Vacuoles are especially large in some species of sulfur bacteria; in these bacteria the vacuoles can take up as much space or more as vacuoles in plant cells do, up to 98% percent of the cell’s area. These vacuoles are often used to store nitrate ions for later use by the cell.

Some cyanobacteria also have vacuoles that are permeable to gases. Gases can be moved into or out of the vacuole which gives the bacteria a way to control their buoyancy.

Structure and Function of Vacuoles in Protist Cells

Protists contain a specific type of vacuole called a contractile vacuole. Instead of being used for storage, this vacuole regulates the amount of water in a cell (known as “osmoregulation”). Protists that live in freshwater can take too much water into their cells, causing them to rupture. The contractile vacuole prevents this by contracting and expelling water from the cell.

A vacuole is an organelle that is found in many types of cells, including animal, plant, fungi, bacteria, and protist cells. The main vacuole function is to store substances, typically either waste or harmful substances, or useful substances the cell will need later on.

Vacuoles are most important in plant cells, where they have additional functions, such as maintaining the proper pH and turgor pressure the plant needs to thrive.

Now you know about vacuoles, but what about the rest of the cell? The cell theory is a key biological concept you'll need to know, and you can learn all about it in our in-depth guide to cell theory.