Valedictorian vs. Salutatorian: What's the Difference? 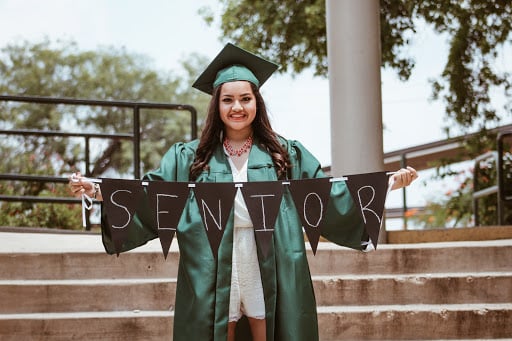 There are lots of reasons to work hard in high school: you gain important knowledge and skills, your grades help you get into great universities, and your dedication can even earn you scholarship money for tuition!

But your hard work can also help you become valedictorian or salutatorian, which are awards given to the top two students in your graduating class. But what does it mean to be a valedictorian vs. a salutatorian?

Don’t worry: you’ve come to the right place! Not only will we explain what a valedictorian and salutatorian is, we’ll also dig into the similarities and differences between the two awards and what they mean for the college admissions process.

What Is a Valedictorian?

Let’s start by learning more about becoming a valedictorian. Most schools award the title of valedictorian to the student who graduates with the highest cumulative GPA.

So what does that mean exactly? Your cumulative GPA is the average of every final grade that you’ve made throughout high school! Additionally, most schools use a weighted average when ranking students. In other words, grades from AP and IB courses are given extra points to account for the difficulty of the course (which means that instead of a 4.0, you can earn a 5.0 in those classes). So if you have your heart set on becoming valedictorian, you’ll want to make sure you take AP courses—and make great grades in them!

Furthermore, valedictorians are usually named during the second semester of senior year, and the award comes with a few special perks. First, the valedictorian usually gets special graduation regalia (also known as graduation attire) to help them stand out from the crowd. This can be a different colored robe, a unique tassel on your mortarboard, or an additional stole, cord, or medal. Each school has a unique set of regalia, but you’ll definitely get some additional swag for your hard work.

Second—and more importantly—the valedictorian plays an important role in the graduation ceremony. Unlike most graduates, who will only come on stage to get their diploma, valedictorians usually sit on stage and actually participate in the ceremony itself by giving a speech. (We’ll talk about what that looks like in depth a little later.) Because the valedictorian is the top of the class, they serve as a representative for their classmates, which is a huge honor!

If you earn the title of valedictorian, you’ll be in great company! Here are some famous valedictorians you may know: 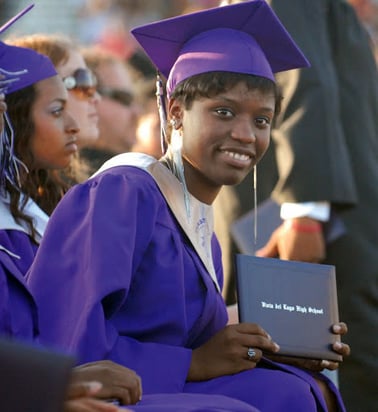 What Is a Salutatorian?

Just like a valedictorian, salutatorians are students who have demonstrated outstanding academic achievement during their four years in high school. Traditionally, the title of salutatorian is given to the second highest-ranking student in a graduating class. Just like the valedictorian, this is determined by a student’s cumulative, weighted GPA.

Furthermore, becoming salutatorian comes with many of the same perks as valedictorian. Like the valedictorian, the salutatorian often gets special graduation regalia to recognize their achievement. These are usually similar to the valedictorian regalia with minor adjustments. For example, if your school gives out special stoles, the stoles may be the same style but different colors! But at the end of the day, the goal is the same: unique regalia helps you stand out from the crowd while honoring your incredible achievement.

Before we jump into the differences between the valedictorian and salutatorian, check out this list of famous salutatorians you’ll definitely recognize: 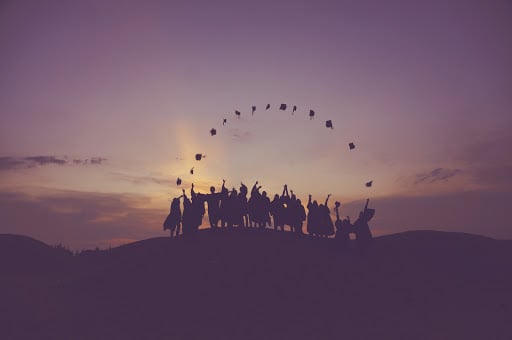 Valedictorian vs. Salutatorian: The Big Differences

By now you’ve probably figured out that valedictorians and salutatorians have a lot on common. But they also have a few important differences, too. Let’s take a close look at the unique aspects of each title.

Of course, the most obvious difference is in the numbers: valedictorians graduate ranked #1 in their class, while salutatorians take the #2 spot.

It all boils down to this: graduating as your class' valedictorian or salutatorian is a huge honor and a giant recognition for your hard work! 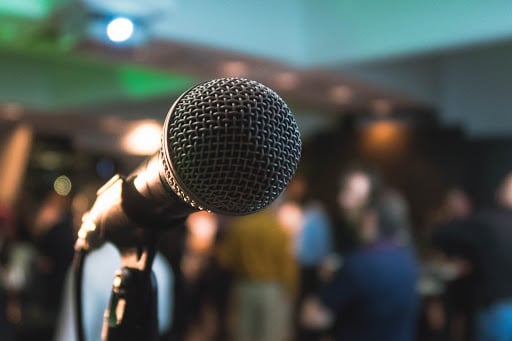 So if a valedictorian and a salutatorian both graduate at the top of the class, get fancy regalia, and give speeches during the graduation ceremony, what makes the awards different from one another?

The biggest distinction between a valedictorian and salutatorian comes in the content of their speeches!

The term “valedictorian” actually comes from the Latin phrase vale dicere, which means to say farewell. In other words, despite coming in first in the rankings, the valedictorian’s speech often comes toward the end of the graduation ceremony.

That means the valedictorian’s job is to put a capstone on their classmates’ high school experience. It’s a chance for students to say goodbye to high school while looking forward to their next adventures.

Because of that, a valedictory speech often has two parts. The first part looks back at the memories and lessons of high school, and the second part talks about how students can carry what they’ve learned into the future. In other words, think of the valedictorian’s speech as wishing everyone a fond farewell while looking forward to the next step in life’s journey!

Unlike the valedictorian, who often speaks to their fellow students, the salutatorian speaks on behalf of the graduating class in welcoming friends, family, and other loved ones to the ceremony. They also introduce any other speakers and representatives to the audience. 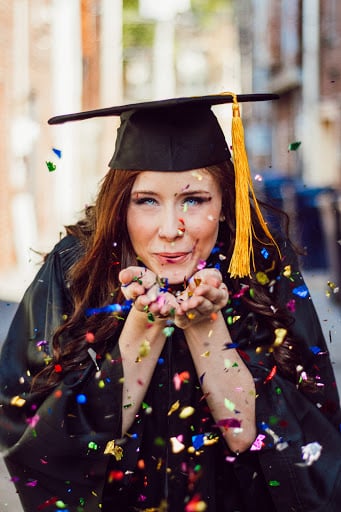 How Does Graduating as a Valedictorian or Salutatorian Affect Applying for Colleges?

The short answer is that it doesn’t really affect your application or admissions process since these honors aren’t awarded until the second semester of your senior year. By this point, you’ve already submitted your college applications. In fact, you might have already committed to your dream school if you applied early action!

Additionally, even if you can list valedictorian or salutatorian honors on your application, most universities don’t weigh them very heavily in the decision-making process. That’s because it can be hard for admissions counselors to understand what those honors really mean. For example, some schools rely solely on GPA to determine whether someone becomes valedictorian, while other schools use a combination of GPA and extracurricular involvement. Some schools even allow the student body to weigh in by voting on candidates!

It’s impossible for every admissions counselor to know the valedictorian and salutatorian criteria for every high school, so it’s easier for them to remove the ranking from consideration. William R. Fitzsimmons, the dean of admissions at Harvard, summed it up best when he told the New York Times, “I think, [the title of valedictorian is] a bit of an anachronism. This has been a long tradition, but in the world of college admissions, it makes no real difference.” 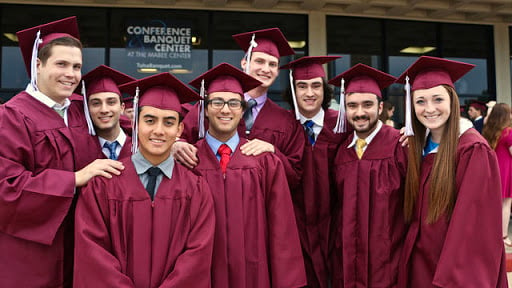 Do All High Schools Have Valedictorians and Salutatorians?

Although these are very common awards in American high schools, some schools have decided to treat these titles differently.

The “None Of The Above” Approach

In recent years, some high schools have decided to get rid of the titles of “valedictorian” and “salutatorian” altogether.  Some schools believe that it creates unnecessary competition between students, while others have decided to move away from the titles as a matter of fairness. As Dr. Mary Gruccio, the superintendent of the Cumberland County School District in New Jersey, explains, “We have had issues in the past where kids have been so close together, within a fraction of a point… [and] in my opinion, it creates a lot of anxiety that does not have to take place."

Because the top students in a class are often separated by fractions of a point, removing the titles of valedictorian and salutatorian are a way to ensure fairness and equal recognition of students’ hard work.

But there are other schools who have swung the opposite direction: instead of abolishing the awards, they have decided to designate multiple valedictorians and salutatorians in each graduating class.

Take, for instance, Washington-Lee High School in Arlington, Virginia. In 2015, the school designated 117 valedictorians out of a class of 457 graduates. (The school awarded any student with above a 4.0 the title.)

So why would a high school choose to do this? The goal in awarding multiple valedictorians is the same as naming no one the title: fairness. As Winnie Hu writes for The New York Times, school principals believe that recognizing multiple valedictorians “reduces pressure and competition among students, and is a more equitable way to honor achievement, particularly when No. 1 and No. 5 may be separated by only the smallest fraction of a grade.”

Administrators also argue that naming multiple valedictorians prevents grade inflation, since teachers might feel pressured to give bright students better grades to help their chances at scoring one of the top two spots in their graduating class. 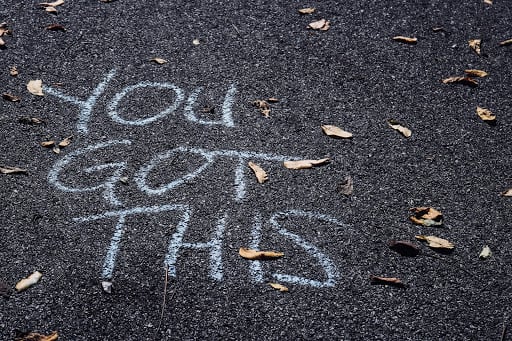 While the honor is certainly nice, it’s a recognition of a student’s hard work, not a golden ticket into an Ivy League university. So aim for becoming valedictorian or salutatorian because it means something to you, not because you think it will make a difference to an admissions counselor!

So now that you know the differences in a valedictorian vs. a salutatorian, it’s time to get your journey to greatness off on the right foot!