What Is the Density of Water? By Temperature and Unit 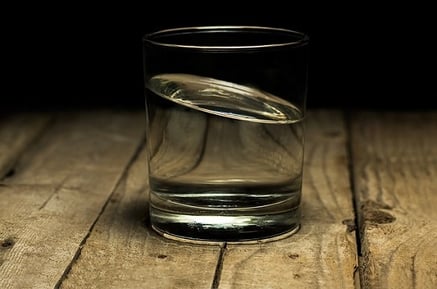 In this guide we explain water density, provide a chart you can use to find the density of water at different temperatures, and explain three different ways to calculate density.

What Is the Density of Water?

It's no coincidence that water has a density of 1. Density is mass divided by volume (ρ=m/v), and water was used as the basis for establishing the metric unit of mass, which means a cubic centimeter (1cm3) of water weighs one gram (1g).

So, 1g/1cm3 = 1 g/cm3, giving water its easy-to-remember density. However, water's exact density depends on both the air pressure and the temperature of the area. These variations in density are very slight though, so unless you need to know very exact calculations or the experiment takes place in an area with an extreme temperature/pressure, you can continue to use 1 g/cm3 for water density. You can look at the chart in the next section to see how water's density changes with temperature.

Note that these water density values are only true for pure water. Saltwater (like the oceans) has a different density which depends on how much salt is dissolved in the water. Seawater density is typically slightly higher than the density of pure water, about 1.02g/cm3 to 1.03g/cm3.

As you can see in the chart, water only has an exact density of 1 g/cm3 at 39.2°F or 4.0°C. Once you get below water's freezing point (32°F/0°C), the density of water decreases because ice is less dense than water. This is why ice floats on top of water and, when you put ice cubes in a glass of water, they don't just sink straight to the bottom.

The chart also shows that, for the range of temperatures typical for indoor science labs (about 50°F/10°C to 70°F/21°C), the density of water is very close to 1 g/cm3, which is why that value is used in all but the most exact density calculations. It's not until the temperature is very extreme in one direction or another (close to freezing or boiling), that the temperature of water changes enough that 1 g/cm3 would no longer be acceptably accurate.

How to Calculate the Density of a Substance

So know you know what the density of water is at different temperatures, but what if you want to find the density of something that isn't water? It's actually pretty easy to do!

You can find the density of any substance by dividing its mass by its volume. The formula for density is: ρ=m/v, with density represented by the symbol ρ (pronounced "rho").

There are three main ways to calculate density, depending on whether you're trying to find the density of a regularly-shaped object, an irregular object, or a liquid, and if you have any special tools like a hydrometer.

Calculating the Density of a Regular Object

For regular objects (those whose faces are standard polygons, such as squares, rectangles, triangles, etc.) you can calculate mass and volume fairly easily. The mass of an object is simply how much it weighs, and all regular polygons have an equation for determining their volume based on their length, width, and height.

Next, you divide the mass by the volume to get density (ρ=m/v).

So the density of aluminum is 2.7g/cm3, and this is true for any piece of (pure and solid) aluminum, no matter what its size is.

Calculating the Density of a Liquid or Irregular Object

If the object has an irregular shape and you can't easily calculate its volume, you can find its volume by placing it in a graduated cylinder filled with water and measuring the volume of water it displaces. Archimedes' Principle states that an object displaces a volume of liquid equal to its own volume. Once you have found the volume, you'd use the standard ρ=m/v equation.

So if you had a different, irregular piece of aluminum that weighed 550g and displaced 204mL of water in a graduated cylinder, then your equation would be ρ = 550g/204mL = 2.7g/mL.

If the substance you're trying to find the density of is a liquid, you can simply pour the liquid into the graduated cylinder and see what its volume is, then calculate density from there.

Calculating the Density of a Liquid With a Hydrometer

If you're trying to calculate the density of a liquid, you also can do so by using an instrument known as a hydrometer. A hydrometer looks like a thermometer with a large bulb at one end to make it float. 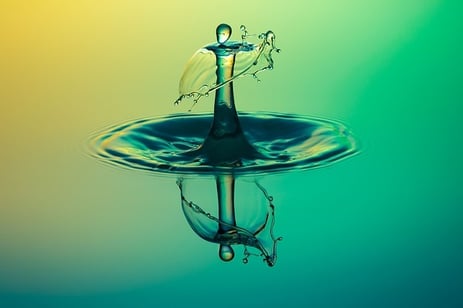 Summary: What Is the Density of Water?

Water density is typically rounded to 1 g/cm3 or 1000 kg/m3, unless you are doing very exact calculations or conducting an experiment in extreme temperatures. Water's density changes depending on the temperature, so if you're doing an experiment close to or past water's boiling or freezing point, you'll need to use a different value to take into account the change in density. Both steam and ice are less dense than water.

The equation for density is ρ=m/v.

Now that you know why water's density is unique, but what about its other characteristics? Find out why the specific heat of water is special.

Looking for other physics-related topics? We'll teach you how to calculate acceleration with these three essential formulas and give you two simple examples of the law of conservation of mass.