What Is the Federal Work Study Program? Definition and Guide 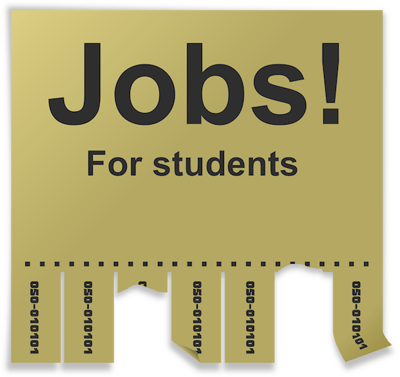 If you're brainstorming different methods of funding your college education, you've likely considered working your way through school. The federally-funded Work Study program exists to make this option a little more viable. You don't receive a loan or a grant - instead, you get a job that exists partly because this program subsidizes your wages.

Work-study awards are unique components of many students' financial aid packages. Because these awards are so different from your typical loan, grant, or scholarship, you might have questions about how they work, exactly. In this post, I'll go over everything you need to know about Work Study.

What Is the Work Study Program?

As you may already know, the federal government offers many different types of financial aid to students who need help paying for school. When you submit a Free Application for Federal Student Aid, or FAFSA, you're submitting yourself for consideration for these programs.

If you're accepted to a particular school and noted that you would like to be considered for financial aid, you'll receive an aid package from that institution. The package will include the federal aid you're eligible for (grants, loans, and work study awards), in addition to aid awarded by the school (like scholarships).

If you're eligible to receive Federal Work Study (FWS), which is a need-based program, the award amount will be listed in this financial aid package. It's built in as a form of "self-help" - basically, it's money that schools expect you to earn during the academic year to help pay for your educational expenses.

At this point, you may be wondering how this could be considered an award. It just sounds like a charge you're expected to pay, right? To a certain extent, that's the idea. It's not a grant - you don't get any money handed to you - but it's meant to make your life easier when it comes to getting a campus job.

Through the work study program, the federal government subsidized certain jobs (most of which are on campus). Schools hire students with work study awards, and these students' wages are paid in part by that federal money. The amount that the government actually subsidizes depends on the type of work that you're doing, but it good be up to 75% of your wages.

Ultimately, this program incentivizes institutions to (1) create jobs that can be filled by part-time students, and (2) hire students with Work Study awards.

I've used the FAFSA4caster to come up with an example federal aid award package that includes FWS. In this example, I entered a family gross adjusted income of $65,000 and a total cost of attendance of $65,000. Remember that cost of attendance includes tuition, room, board, fees, and all personal and travel expenses.  I'll refer back to this example throughout this article. 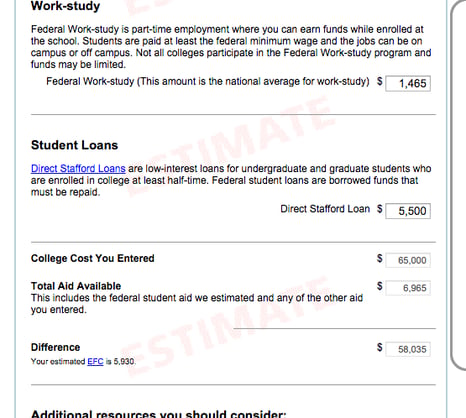 In this example situation, I would be eligible for $1,465 in Work Study, and $5,500 in Direct Stafford Loans. The difference between my cost of attendance (CoA) and the total federal aid available to me is $58,035. My expected family contribution (EFC) is $5,930.

Let's say for the sake of this example, I attend a school that meets 100% of students' financial need (this, of course, is an idealized and simplified situation). The EFC subtracted from the difference is $52,105, so I'm provided with $52,105 in grants and scholarships. Ultimately, I am personally responsible for working to come up with $1,465 if my true CoA comes out to be $65,000.

Who's Eligible for Federal Work Study?

In order to qualify for FWS, you must both demonstrate financial need and meet all federal aid requirements. The program is fortunately open to both undergraduate and graduate students.

You can use your family's financial information to estimate whether you would receive a FWS award (and if so, how large an award) by checking out the FAFSA4caster. Get step-by-step instructions for using the FAFSA4caster here.

The following charts explain all the federal aid requirements in detail.

You must do all of the following:

In addition to the above, you must be able to check one of the following:

Most FWS jobs are on campus, which should make it easier to get from your dorm to class to work. Some nonprofits or public agencies offer FWS positions, although these jobs are relatively rare. Almost any sort of on-campus job could be a Work Study job - in fact, a lot of employers that offer these positions can only afford to hire students with FWS awards (especially because up to 75% of your salary may be subsidized).

Examples of Work Study jobs include library staffers, admissions office tour guides, research assistants, and even baristas. I know for a fact that the best student cafe in Harvard Yard exclusively hires students with FWS awards. 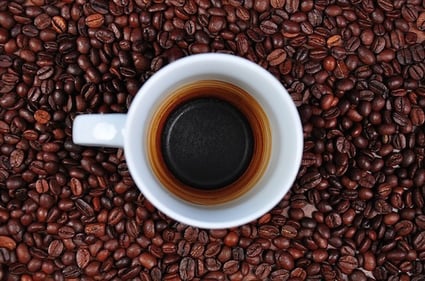 Getting paid to make (and drink) coffee? Yes please.

How Much Can You Make?

Your hourly salary will be at least the current federal minimum wage, which is $8.25/hr at the moment. You could possibly earn more, depending on what you're doing and what school you're attending. Many schools have their own campus minimum wages; for example, the minimums at Harvard for work study jobs stand at $10/hr for undergrads, and $12.50/hr for grad students.

There are a few restrictions to where and how you can earn FWS money, but generally it's a pretty flexible program.

First, in order to get a Work Study job, you have to attend a school that participates in the Work Study program. Your school's financial aid program will be able to tell you whether they have FWS jobs on campus. They'll also be able to direct you to FWS job postings.

As for how you use your work study money, you're free to do whatever you'd like with it. Your wages will go directly to you, unless you request that the money be sent to your school so it can be applied to charges for things like tuition, room, and board.

A word of warning: if you spend your earnings on things that are not budgeted into your estimated cost of attendance, you could leave yourself with a "gap" between how much money you have, and how much money it costs to attend school. For example, let's say (based on the financial aid package I described earlier in the post) that all of my aid goes to tuition, room, board, and fees. I still have to pay for laundry, books, and transportation; that's what my FWS award ($1,465) is earmarked for. If I do something else with my FWS earnings (say, buy expensive concert tickets), I won't have the money I need to fund personal expenses. You do not want this to happen; your roommates will not be pleased if you have to bum quarters off them for laundry.

The short answer is no, you're under no obligation to take a FWS job.

If a FWS award has been factored into your budget in your financial aid package, and you decide not to take a job, you could choose to live more frugally to lower your cost of attendance. This is a good option if you're planning on using your earnings to pay for personal expenses (like in the example I described above).

How Do You Apply?

Now that you've learned all about the federal Work Study program, you know that it's a good option for students who are interested in working part-time while in school. You can apply for a FWS award by submitting a Free Application for Federal Student Aid, or FAFSA (get step-by-step directions here).

Application deadlines for this program vary by school, but funds tend to be limited. It's best to apply earlier rather than later (e.g. submit your application early spring for the next academic year). Contact your financial aid office to check on detailed information on deadlines for FWS applications.

Keep in mind that having a Work Study award doesn't guarantee a Work Study position - you have to apply for jobs once you're on campus, just like for any other part-time position. 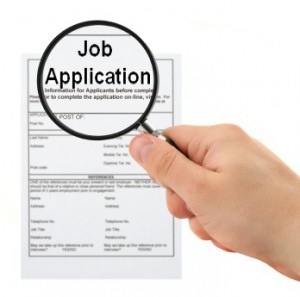 You still have to apply for FWS positions, but the good news is you'll get great application & interview experience

Planning Ahead: You Have a Work Study Award, So Now What?

If you already have a FWS award, or think you might receive one, you'll find strategies for making the most of it in this section.

Work Study jobs are often highly coveted. If you're planning on using your FWS award, start looking for jobs as soon as you get on campus.

Budget Out Your Award

It can be tempting to work a lot of hours at your FWS job once you start getting in those paychecks. If you have a smaller award amount, or if you work many hours, you could run out of your FWS money faster than you anticipate. If your employer has hired you specifically because you have FWS, they may not be able to afford you if you run out of funds.

Be honest with your employer about your Work Study Award. Chances are, she's had FWS employees before, and knows that you'll have to stay within certain earnings parameters. She may even have a budget to keep paying you after you run out of FWS funds, which is another reason to keep her in the loop.

Once or twice a semester, it's smart to double-check whether your FWS award amount is where you expect it to be. This gives you the opportunity to catch and correct any mistakes (for example, if you've earned $1,000 but $2,000 has been deducted from your Work Study award). You should be able to check the status of your FWS award through your employer, or through your student employment office.

FWS awards can change from year to year, especially if you report any outside scholarships or awards. This can be frustrating, especially if you find a FWS-only job that you really like. Be prepared to be flexible when it comes to budgeting out your Work Study job earnings.

If you're interested in the federal Work Study program, you should also learn more about other types of federal aid. After all, you'll only have to submit one application to be considered for all these different aid programs! Learn more about the Pell Grant, Direct Unsubsidized Loans, and Direct Subsidized Loans.