Who Is Medusa, the Snake-Haired Gorgon? 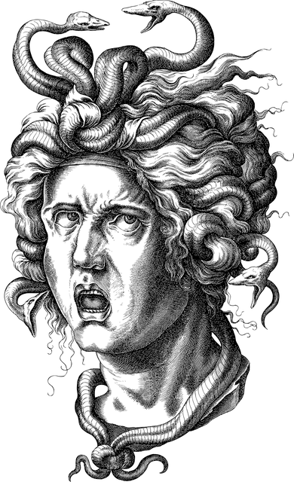 You've probably heard of Medusa and know that she's the woman with snakes for hair. But who is Medusa really? How did she come to be so terrifying, and who killed Medusa in the end? The Medusa story is one of the most popular and enduring of all ancient Greek myths, and here we explain Medusa's entire life (and after death) story.

Who is Medusa? Medusa was a character from ancient Greek mythology known for her terrifying ability to turn people to stone. She was one of the Gorgons: three sisters with human bodies, large wings, and hair made of living snakes. The other two Gorgons were named Stheno and Euryale, and their parents were the sea gods Ceto and Phorcys. Medusa, the youngest of the Gorgon sisters, was the only one of them who wasn't immortal, as well as the only one who began life as a great beauty.

The earliest known mention of Medusa occurred in Theogony, an epic poem written by the ancient Greek poet Hesiod sometime around 700 BC. Later on, Medusa was also written about by the ancient Roman poets Ovid and Virgil who expanded on her story and origins more. Ovid mentioned that, before she was cursed, Medusa's hair was particularly beautiful and she was very proud of it. Here's a quote from his Metamorphoses, written around 8 AD:

"Medusa once had charms; to gain her love

They, who have seen her, own, they ne'er did trace

Yet above all, her length of hair, they own,

Medusa is not mentioned by name in perhaps the most famous ancient Greek story, Homer's The Odyssey.

What Were Medusa's Powers?

Medusa began life as a beautiful human, albeit one with monstrous parents and sisters. But why was Medusa cursed, and who cursed Medusa?

According to ancient Greek mythology, in Medusa's early days, she was so beautiful she caught the interest of Zeus, the most powerful of all the Greek gods. Zeus impregnated Medusa in a temple of Athena, a powerful Greek goddess. This unholy act in the temple of a virgin goddess so enraged Athena that she put a curse on Medusa to rid her of her beauty. After her curse, Medusa is often described as having huge fanged teeth, a snake-like tongue, clawed hands, a hideous face, and hair made of writhing snakes. In some stories Medusa incurred Athena's wrath by bragging about her beauty but, either way, it was a steep price for Medusa to pay.

The curse also gave Medusa new powers. From then on, every person who looked at her face was turned to stone. According to most other stories, this was a power Medusa's two Gorgon sisters already had, so together the three became a terrifying trio (although Medusa remained the only Gorgon who was mortal).

Medusa's blood also had special powers. After Medusa's head was severed, drops of her blood that fell to the ground were transformed into venomous snakes. When the hero Perseus (we'll get to him later) carried Medusa's head after killing her, he traveled across much of Libya. The blood from Medusa's head seeped through the bag he was carrying it in and left many drops of blood across the country, which, legend has it, is why Libya has so many snakes. 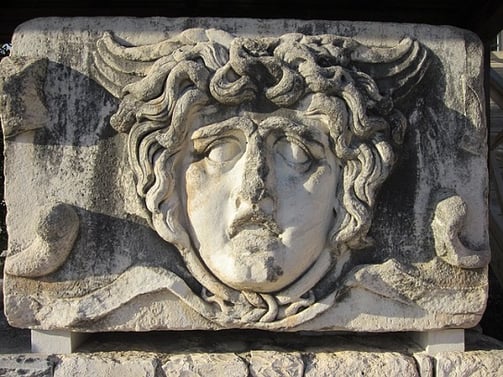 The two best-known stories of Medusa are her being cursed and how her death came about. Between those two events, she retreated to an island called Sarpedon with her sisters, where they lived in a large cave. The powers of the Gorgons were well known, and people viewed them as terrifying monsters to be avoided at all costs.

In perhaps the most famous Medusa story, Medusa is killed by the ancient Greek hero and demigod Perseus. Perseus was the son of Danae, a mortal princess, and Zeus (who really got around). Danae's father, King Acrisius of Argos, had heard from an oracle that any child she had would kill him, so he had Danae locked in a tower. That wasn't enough to keep Zeus away, though, and he visited Danae as a shower of gold and impregnated her.

When Perseus was born, Acrisius couldn't bring himself to kill him, so he had Perseus and Danae sent out to sea in a wooden chest. The two were rescued off the island of Seriphos by a prince named Dictys, who raised Perseus as his own son. However, not everyone was such a fan of Perseus. Dictys' brother, Polydectes, was king of Seriphos and had also fallen in love with Perseus' mother. Perseus didn't approve of the relationship between Polydectes and Danae, so Polydectes wanted him out of the way. To do this, he sent Perseus on a quest to bring back the head of Medusa. Because Medusa was so powerful and so feared, this was the equivalent of a suicide mission.

However, Perseus had help! As the son of Zeus, he was someone the other Greek gods wanted to protect, so they gave him special gifts. Perseus got a helm of invisibility from Hades, winged sandals from Hermes, a sword from Hephaestus, and a bronze shield from Athena (who apparently still had a bone to pick with Medusa).

With all of these magical gifts, killing Medusa was actually pretty easy. Perseus found the cave where the Gorgons lived and used the shiny bronze shield Athena had given him to look at Medusa's reflection and see where she was without risking a look at her actual face. Once he found her, Perseus went up and cut off Medusa's head while she was sleeping. However, when she was killed, Medusa was still pregnant from her liaison with Zeus. When Perseus cut off Medusa's head, her two children sprang out of her severed neck: Pegasus and Chrysaor. Pegasus took the form of a winged horse, while Chrysaor had the form of a golden giant.

After Perseus killed Medusa, he quickly stuffed her head in a bag so that he wouldn't risk being turned to stone by her gaze (her powers still worked even after her death). Medusa's Gorgon sisters pursued Perseus, but he escaped, flying away either on Pegasus or with the winged sandals Hermes gave him (the stories vary).

Perseus then used the head of Medusa to settle some old grudges and turn people into stone who hadn't shown him proper respect in his previous explorations. One of these men was Polydectes and, after he was turned to stone, Dictys became king of Seriphos, and Danae queen. Perseus had King Acrisius killed the same way, thus fulfilling the oracle's prophecy.

After that was done, Perseus returned his magical gifts and gave Medusa's head as an offering to Athena. Athena took a lock of Medusa's hair and gave it to the Greek hero Heracles (often known as Hercules). Although the lock of hair didn't have the power to turn people to stone, it still filled anyone who looked upon it with terror.

Athena then set Medusa's head in a shield of Zeus' that became known as the Gorgoneion. Perseus used the shield in battle, and anyone who looked upon it would be turned to stone. Perseus went on to marry a woman named Andromeda, found the city of Mycenae, and have quite a few more adventures, some of which involved Pegasus. There are many different stories about how Perseus' own death came about, and one of them says that, as an old man, Perseus went into battle with the Gorgoneion. However, because his sight was poor, he didn't face the shield the correct way and, when no one around him turned to stone, decided its powers no longer worked. He turned the shield towards him, caught a glimpse of it, and turned to stone himself. His son then later had the shield burned, thus eliminating Medusa's powers forever.

For centuries in ancient Greece and Rome, depictions of Medusa were common on soldiers' shields as well as on works of art. The powerful, fearsome image remained popular throughout the centuries and, several thousand years after the story of Medusa was first told, her head was used by designer Gianni Versace as the logo for his fashion company. 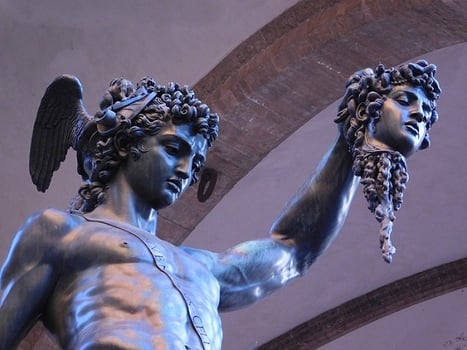 Who were the most important ancient Greek gods and goddesses? Our guide explains the 28 immortals who made up the Greek pantheon.

Did you know that garden gnomes originated in ancient Rome? Look about the long and fascinating history of everyone's favorite yard decoration by reading our guide on the history of garden gnomes.

Bastet was an important goddess in ancient Egypt. Learn all about her and her connection to cats in our in-depth guide to Bastet.