What Is the Rainbow Color Order? Understanding ROYGBIV 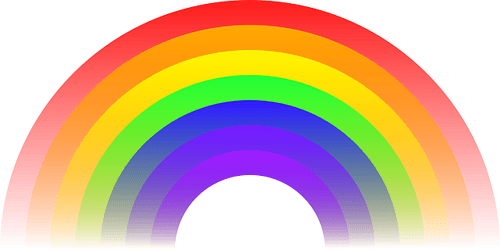 You’ve more than likely seen a rainbow after some rain on a sunny day. But what are the colors of the rainbow in order? And what causes a rainbow to form? We’ll explain everything you need to know about the rainbow color order, including what ROYGBIV means, why rainbows exist, and whether or not the rainbow order will ever change.

What Are the Colors of the Rainbow in Order?

Officially, the rainbow color order is as follows:


This means that every rainbow you see will have these seven colors in this order (from the top of the arc of the rainbow to the bottom of the arc).

The easiest way to remember the rainbow color order is to use the mnemonic device ROYGBIV, in which each letter stands for the first letter of the color names (in other words, R is for red, O is for orange, Y is for yellow, etc.). Most people pronounce ROYGBIV in three syllables, making it sound and look more like the name of someone: Roy G. Biv.

Occasionally, you might see ROYGBIV written in reverse as VIBGYOR.

I'm willing to bet you can readily envision most, if not all, of these seven colors of the rainbow. But many people get confused about the color indigo and how it differs from blue and violet. Typically, indigo is described as being about halfway between blue and violet.

Most people seem to agree that indigo is closer to a deep or dark blue than it is a more purple or violet color, but there's still debate even about this! 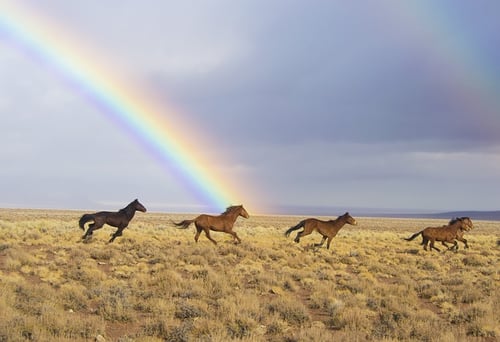 What Is a Rainbow? What Causes One to Form?

You now know the rainbow color order, but what exactly causes a rainbow to form? And why does a rainbow contain these seven colors in this order specifically? To answer these questions, we'll go all the way back to English scientist and mathematician Isaac Newton.

Newton conducted many experiments with light, which are summarized in his 1704 book Opticks, and discovered that when clear white light passes through a prism, it refracts into different colors in a particular order, or what we know as a rainbow. This means that white light is not actually white but is composed of a humongous spectrum of colors!

These colors make up the visible (light) spectrum; it's the part of the electromagnetic spectrum that human eyes can see.

Newton is the one who decided to interpret the rainbow order in terms of seven unique colors—ROYGBIV—but the truth is that rainbows consist of more than a million colors, many of which are invisible to the human eye!

In addition, some colors, such as pink and brown, are indeed visible to the human eye but do not have their own wavelengths and can only be made when combining certain wavelengths. For example, pink is created by combining red, green, and blue wavelengths.

So how is a natural rainbow made—you know, those rainbows we see in the sky? Rainbows form naturally when sunlight passes through water droplets in the sky, causing the light to refract and reflect, typically in the form of an arc.

Therefore, your chance of seeing a rainbow will be highest on sunny, rainy days. Rainbows always appear opposite the part of the sky the sun is in, so if you’re trying to look for a rainbow, you'll want to make sure that your back is to the sun.

Will the Rainbow Color Order Ever Change?

When we talk about the rainbow color order, most people think of ROYGBIV. But as I mentioned above, there are actually a lot more than just seven colors in the rainbow.

Newton chose to define the rainbow as consisting of seven colors because he believed the number of colors in a rainbow should be the same as the number of notes in a musical scale. Clearly, this is a pretty arbitrary (and non-scientific way) to look at the different colors in a rainbow. Indeed, many people still struggle to distinguish indigo from violet and blue!

Many modern portrayals of the rainbow have just six colors—red, orange, yellow, green, blue, and violet—opting to leave out indigo entirely. For example, the LGBT rainbow flag goes directly from blue to violet, without indigo. 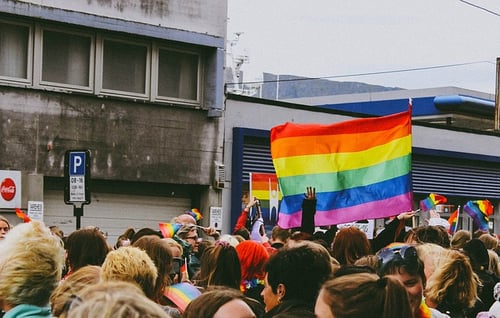 The LGBT rainbow flag at a gay pride parade.

So why do we still include indigo in the rainbow color order, especially if so many people think of it as nothing more than a transitional color between blue and violet? Many believe it is merely due to the desire to want to stick to tradition.

Nevertheless, it's certainly possible that future kindergartners will learn about ROYGBV—minus the I for indigo!

Got other questions about science? Check out our guides on the scientific method and how to convert between nanometers and meters.

Thinking of taking an AP science exam? Then you'll definitely want to sneak a peek at our expert study guides for AP Biology, AP Environmental Science, and AP Chemistry.

Want to know how to say things in other languages? Learn 10 essential Japanese greetings and the different ways you can say, "Hello!" in Italian.