What Is a Dragonfly?

A dragonfly is a large, winged insects that exists on every continent except Antarctica. Dragonflies are noted for their large, flat wings and their vibrant colors, which can vary depending on the individual and the region in which it lives. Dragonflies also have large, compound eyes, often referred to as “bug eyes” that are noticeable from a distance. There are over 5,000 species of dragonflies all over the world.

Where Do Dragonflies Live?

Dragonflies can be found all over the world. They typically stay close to water; most species of dragonfly spend the majority of their life underwater or close to the surface of the water. Depending on the species, dragonflies prefer ponds, marshes, or streams. Dragonflies are known for being picky about their habitats. If you see a dragonfly near a body of water, the water is probably pretty clean.

Like all insects, the dragonfly’s body is made of three distinct sections; the head, abdomen, and thorax, and the dragonfly has an exoskeleton. The head on a dragonfly is the shortest part of its body, and has two short antennae. The total body of a dragonfly is 1-4 inches in length. 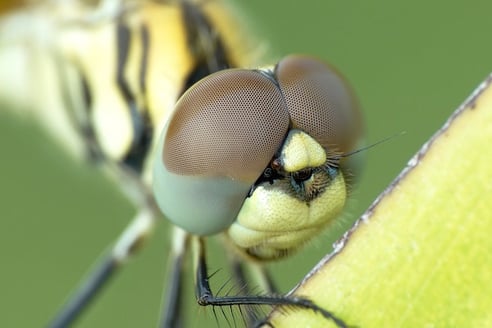 Dragonflies are also notable for their eyes. A dragonfly’s eyes cover most of its head and they can see nearly 360 degrees around them. Dragonfly eyes are separate on the sides of the head, and come together on the top of the head. Dragonflies have compound eyes, and have more color-proteins than humans. This means that they see the world like a mosaic with a million tiny pictures.

Studies are still being done on the way the dragonfly sees the world, but studies show that dragonflies have an incredible ability to see colors that humans can’t see, and in different shades and intensities, including ultraviolet light.

On the thorax, dragonflies have two pairs of wings and three pairs of legs. The wings are long, transparent, and “patterned.” A dragonfly’s wings are as unique as its coloring. Think of a dragonfly’s wings as similar to a leopard’s spots or a zebra’s stripes. They’re a mysterious, existing pattern in nature and scientists are unsure of how and why these patterns are formed.

Dragonflies are sturdy insects, as are their wings. The wings are connected to the body via a strong muscle, which allows the dragonfly to fly long distances at a high speed. In most species, a female’s wings are slightly shorter than a male’s wings. Dragonfly wings also don’t fold, like many other species of flying insect. So when a dragonfly lands, their wings stay horizontal to their bodies.

The Life Cycle of a Dragonfly

The life cycle of the dragonfly varies depending on the species, but most dragonflies spend the majority of their lives as nymphs, or baby dragonflies that live below the water.

Dragonflies lay hundreds to thousands of eggs. The length of time it takes for a dragonfly egg to hatch depends on the species. Some eggs can hatch within a few days of being laid by the dragonfly, and others take a several weeks.

After hatching, dragonflies spend most of their lives as nymphs, or immature insects, underneath the water’s surface. Depending on the species, a dragonfly can live in the water as a nymph for up to five years. As nymphs, the dragonfly molts several times under the water. Molting is a process in which an insect sheds its exoskeleton to make room for new growth.

The nymph eventually makes its way to the surface, where it stays and waits for its respiratory system to adjust to the air. Then the dragonfly finds a place to molt, and completes the process into adulthood.

After the dragonfly becomes an adult, it usually only lives for a few months, during which time it reproduces with other dragonflies. Most individuals are caught and eaten by predators. 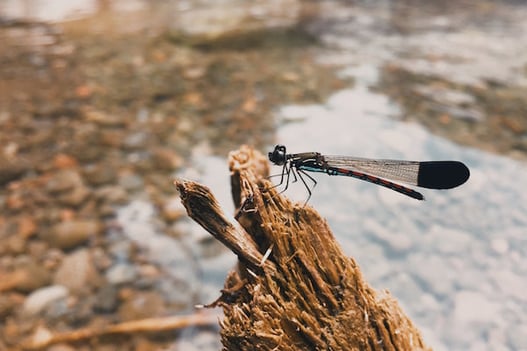 Dragonflies find a feeding area and stake out a “perch” where they can see their hunting ground. They usually stay nearby, defending their territory from other dragonflies or sometimes, other insects. Males in particular are known to be highly territorial, and even more so during breeding season, when females have to mate with them in order to lay eggs in their territory.

Dragonflies are strong and agile flyers. They are capable of flying over large bodies of water. They use a number of different flying techniques, which helps them hunt and cover a lot of ground when looking for mates. They can fly at speeds up to 34mph, though their cruising speed is around 10mph. Dragonflies are also known to hover.

What do dragonflies eat? Dragonflies are actually carnivorous. They have strong jaws with sharp teeth that they use for catching and eating, and primarily eat other bugs. Their diet consists of smaller bugs like mosquitos, moths, and butterflies. Dragonflies use their flying skills and excellent eyesight to pursue their prey.

When catching larger prey, the dragonfly will subdue it by biting its head and dragging it back to its perch. Nymphs are also aggressive hunters, eating most of the small living things they encounter underwater. 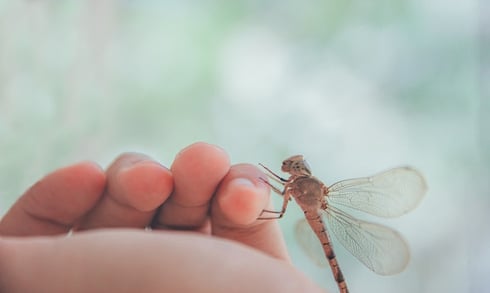 Dragonfly Facts You Need to Know

Dragonflies may be over 300 million years old, but we are still learning about them and learning from them. They present an exciting opportunity to learn about nature and the ecosystem, as well as offering an incredibly beautiful and unique addition to the natural world.

Do you love learning about insects and spiders? Check out our posts on The Praying Mantis, The Garden Spider, and The Camel Spider.

If dinosaurs are more your speed, read up on the Dilophosaurus.

And for an overview on animal biology, don't miss The Complete Guide to Animal Cells.