How Much Is a 2 Dollar Bill Really Worth? 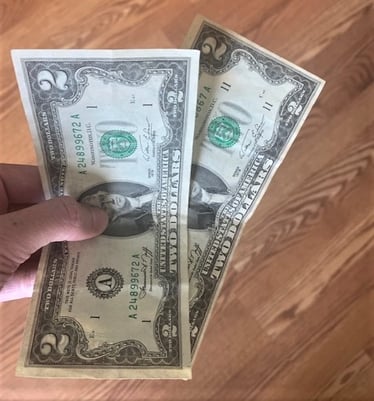 Have some $2 bills lying around and wondering if they're your ticket to a life of wealth and luxury? Before you start planning how to spend your riches, read this article to learn how much is a 2 dollar bill worth. This FAQ guide will answer all the common misconceptions about $2 bills and explain the crazy history behind them.

The first versions of the $2 bill, which were printed in 1862, featured Alexander Hamilton on the front. There have been several changes to the reverse of the bill. Previous designs included a series of ornate scrolls and Jefferson's home of Monticello.

Here are images of the current version of $2 bill:

Absolutely! Even though you may not see them often, $2 are legal tender, and you can use them at any place that accepts cash. Most cash registers don't include a space for $2 bills though, so the cashier will likely need to lift the cash drawer out and place the bill under it the way they do with other less-used bills (such as $100 bills).

Are $2 Dollar Bills Still Being Printed?

Yes! It's a common misconception that $2 bills are no longer being printed. They were previously printed from 1862-1966, in different designs. Printing halted in 1966, then resumed in 1976 with the new (and current) design. However, because the public prefers to use $1 bills over $2 bills, $2 bills have never been produced in large numbers, and hoarding of $2 bills (by people who mistakenly think they are very valuable) means $2 bills aren't circulated nearly as much as other bills. However, $2 bills were printed as recently as 2019 and will be printed again, likely in several years when the supply needs to be replenished.

How Many $2 Bills Are Still in Circulation?

It's difficult to get an exact figure, especially because so many people collect $2 bills, but the US Treasury has estimated that there are nearly a billion $2 bills in circulation, although they make up less than 1% of the US currency in circulation.

Yes. Although you likely won't get $2 bills unless you specifically ask for them, most banks carry a stock of them. The amount of $2 bills each bank carries will vary, but most will have a supply you can ask for when you're taking out or converting money.

It's a common misconception that $2 bills are particularly rare or valuable. This has led many people to hoard them and, as a result, there are large numbers of $2 bills in good condition that aren't being circulated. However, the vast majority of $2 bills are worth exactly that: two dollars. This is true for basically all $2 bills printed within the last 50 years. 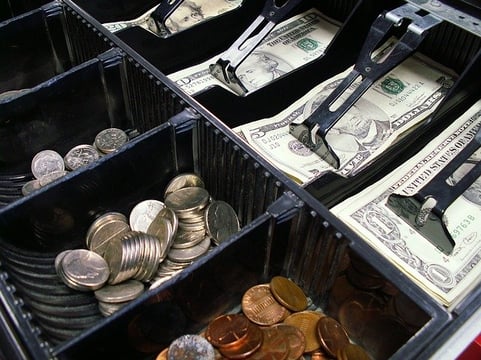 Are There Types of $2 Bills That Are Rarer or Collectors Items?

How much is a $2 bill worth if it's a particularly rare version? There are times when a 2 dollar bill value is significantly more than two dollars, but the bill will need to be quite old and in excellent condition. Most $2 bills need to have been issued before 1928 to be considered particularly valuable, and they also need to be in close-to-mint condition. However, even a $2 bill from the 1800s that has been well-preserved will rarely be worth more than about $1000 dollars; there simply isn't much demand for $2 bills among collectors for them to fetch the very high prices of other rare currencies. You can see more prices for different $2 bills here.

It's not because the Federal Reserve and US Treasury don't want you to! Printing one $2 bill costs half as much as printing two $1 bills, and it has been estimated that the US government would save hundreds of millions of dollars each year if people began using $2 bills as much as they used $1 bills. So why aren't $2 bills popular?

A lot of the reason has to do with false rumors surrounding $2 bills. Back in the 1920s, $2 bills began to be considered unlucky because they were associated with bribery, gambling, betting, and other ways to lose your money. (Many $2 bills from the 1920s are missing a corner, as removing it was supposed to "remove" the bad luck.) People also seemed to prefer to pay with $1 bills, so more of them were printed to meet demand. $2 bills were less popular, so they were never printed as widely. As a result, many cash registers, vending machines, etc. weren't set up for $2 bills, which also led to people using them less.

Because of the low printing numbers and the numerous changes in appearance $2 bills had over the decades, people began to mistakenly think they were rare and hoarded any $2 bills they received. This further reduced the number of $2 bills circulating in the economy, to the point that many people erroneously think the $2 bill is no longer being produced. This further increases hoarding when people do receive a $2 bill, creating a sort of vicious cycle in the currency world.

Some groups, such as conventions and tourist boards, use the low popularity of the $2 bill to their advantage by encouraging tourists/participants to spend only $2 bills in a place to show their economic impact. These are sometimes known as "SpendTom" campaigns.

What Are Other Types of Rare US Currency?

The $2 bill isn't America's only lesser-used currency. Here are some other coins and bills that you won't see often when getting change back at a store.

Dollar coins have been produced, on and off, since 1794. The most recent $1 coins are gold-colored, although they are primarily composed of copper with manganese. One of the most well-known $1 coins features Native American guide Sacagawea and her son on the front and an eagle on the back. Other recent versions have featured other Native Americans, US presidents, and American innovators. The US Treasury has tried to increase the use of $1 coins since they are actually cheaper to produce than $1 bills, but the American public has been generally reluctant to switch from $1 bills to $1 coins.

Half dollars, sometimes called 50-cent pieces, are large, silver-colored coins that are still being produced. Since 1964, they have featured President John F. Kennedy on the front and the presidential seal on the back. Although they were once used heavily, particularly at casino slot machines, but since 2002 they have only been produced for collectors. It's still possible to get them at many banks. The Federal Reserve still has a large stockpile of them, but when that runs low, they'll again be produced to keep them in circulation.

Two cent coins were only produced from 1864 to 1873, and that limited production period has increased their value to collectors.

The largest value of US banknote still being produced is the $100 bill, but they used to be printed in larger denominations, including $500, $1,000, $5,000, and $10,000 bills. The last of these high denomination bills were printed in 1945. They were never widely circulated and were mostly used by banks and the federal government for issuing gold certificates and making large financial transactions.

Known as the "double eagle" the $20 coin was a gold coin produced from 1849 to 1933. Because of their rarity and high amount of gold (the coins are 90% gold and 10% copper alloy) they are one of the more valuable coins to collect. Particularly rare versions have sold for millions of dollars. 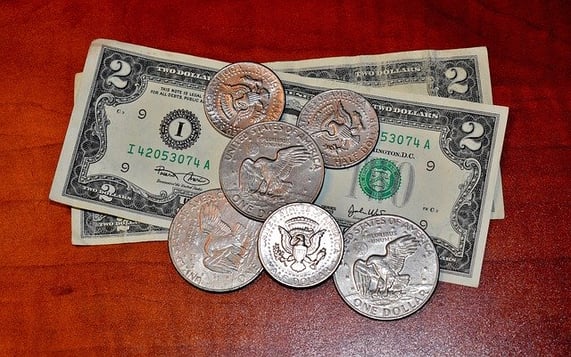 Summary: How Much Is a 2 Dollar Bill Worth?

How much is a 2 dollar bill worth? In the vast majority of cases, the 2 dollar bill value is exactly two dollars. Even though many people believe $2 bills are rare or out-of-print, they've been printed regularly for decades, and there are close to a billion of them in circulation. However, because they were never as popular as $1 bills or $5 bills, they're printed in much smaller numbers and circulated less often, leading many people to believe they're valuable to keep. In fact, the best way to make use of any $2 bills you have lying around is to spend them!

Want to keep learning new things? We've compiled 113 of the most fascinating fun facts. We bet something on the list will amaze you!

Interested in learning more about American history? Check out our guide to the 13 American colonies, for a fun, easy-to-understand overview.

The 3 hole punch may not have the most interesting job, but it has a fascinating backstory. Check out our guide to learn all about the history of the hole punch.