How to Set Up Solitaire With Cards: 5 Variations 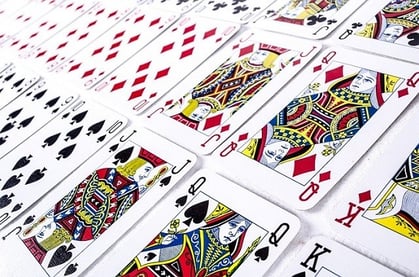 Solitaire is a favorite game for anyone with access to a computer or a phone and a few minutes to spare. It's one of the most popular one person card games around! But long before electronic versions were invented, solitaire was played with cards, and it's still possible to play the game in the original old school way. But what if you're not sure how to set up solitaire with cards? We're here to help!

Read this guide to learn:

Solitaire is a card game played by one person (hence the name). It is also sometimes called Patience or Card Solitaire. The exact origins of solitaire aren't known, but the game became popular in 19th century France. Its first literary mention occurred in 1788, in a German game anthology.

How do you play solitaire? Solitaire uses a full deck of 52 cards to play. How long the game lasts depends on how long the player takes to make each move, but the game typically takes about 5-15 minutes. If you've played a lot of online solitaire, you might notice that playing solitaire with cards takes a bit longer because you have to physically move and flip the cards yourself, instead of just clicking on a screen.

The object of solitaire is to get the cards ordered in sequence, from low to high, for each suit (hearts, spades, clubs, diamonds). Aces are low in solitaire. To win, you'll need to have four stacks (known as foundations), organized by suit, that go in this order, from bottom to top: Ace-2-3-4-5-6-7-8-9-10-Jack-Queen-King

A lot of solitaire depends on the luck of the order you draw your cards, so it isn't possible to win every game. Many times, you'll get stuck with no more moves to play and need to forfeit or reshuffle. You may notice that it's harder to win solitaire when playing with cards; this is because computer-generated solitaire games are often created to increase chances of winning, especially when playing on easier levels. The actual probability of winning solitaire with a randomly sorted deck of cards is about 1/30.

How to Set Up Solitaire: Classic Version

There are lots of variations for how to deal solitaire; this is the classic version, often referred to as "Klondike."

There are three parts of the "solitaire spread"

The foundations begin as blank spots without anything on them, so you don't need to do anything for them. However, make sure to leave room at the top of your playing space for the cards that will eventually go there.

How many rows in solitaire do you make when setting up the game? You'll deal out seven columns for the tableau. The first column on the left has one card, the one to the right of it has two cards, the one to the right of that has three cards, etc. until the 7th and final column, which has seven cards. For each column, only the top card will be face up, each of those beneath it will be face down. Instead of stacking the cards within a column on top of each other, cascade them a bit so you can easily see how many cards remain in each column.

The rest of the deck will go facedown as the stock pile stack in the upper left-hand corner. All together, it'll look like this: 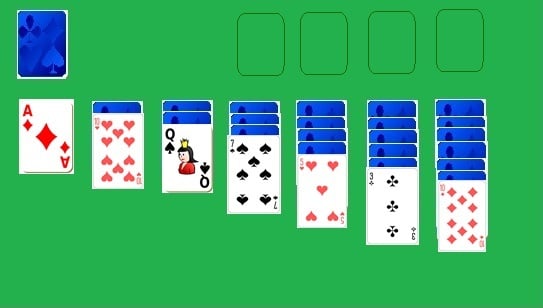 Once you've got your cards set up, you're ready to play solitaire! Remember, the goal is to move cards from the tableau to the foundations, ordered by number and suit.

How Do You Play Solitaire?

Now that the game is set up, you're ready to learn how to play solitaire with cards. The object of solitaire is to build up each of the four foundations, in proper suit and sequence (ace through king). Once you accomplish that, you win the game!

To begin solitaire, the cards are dealt out as described above. You'll then look at the faceup cards and see if you can make any moves. Each foundation must begin with an ace, and only an ace, so if you have any aces showing, move them up to the foundation spots.

You may also be able to make other moves. You can move cards from one tableau column to another, as long as they meet the following rules:

Basically, to move one card to a card in a different column, the first card must be opposite in color and one less in rank than the card it's being moved to.

For example, you can move a red 9 to a black 10, but you can't move a red 9 to a red 10. You also can't move a 10 to a 9 (of any color) because the cards must descend in value. When you have unblocked a facedown card by moving the faceup card(s) to another column, flip that facedown card over. Each column should always have at least one faceup card (unless it's an empty column).

Make as many moves as you can and, once you're out of options, you'll draw cards from the stock pile.

The game ends either when you win by completing the four foundations or you run out of moves to make. 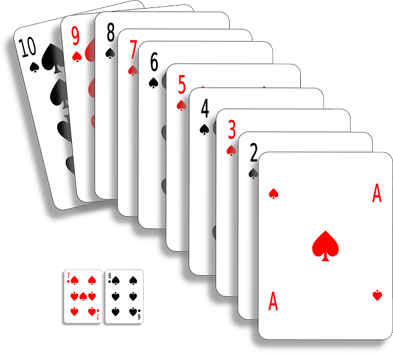 How to Set Up Solitaire: Variations

Because solitaire has been such a popular game for so long, there are dozens of variations. Below are instructions for how to set up four popular solitaire variations using cards.

How to Set Up Spider Solitaire

For spider solitaire, you'll need two 52-card decks. The goal is similar to that of solitaire except that, because there are two decks in play now, there will be eight foundations to complete (two for each suit).

How to Set Up Free Cell

Free cell is another popular version of solitaire. It requires one deck of cards to play. To set it up, leave room for four open foundations (the same as solitaire) and four open "cells." Cards are dealt, all face up, in eight cascading columns so that you can see the face of every card. There will be four columns of seven cards and four columns of six cards.

The goal of the game is the same as solitaire--completing the four foundation stacks by moving cards around the tableaux--however, in free cell, any top card in a tableau column can be moved to one of the four "free cells" to facilitate movement of the cards.

How to Set Up Joker Solitaire

In this version of solitaire, the two jokers are used as wild cards. The game is set up the same as traditional solitaire but, when you come across a joker, you can play it as any card into a foundation pile. Once you've decided which card the joker is representing, it can't be changed. Additional cards in a foundation are placed as top of the joker as usual. When the card the joker is replacing appears, it takes the place of the joker in the foundation, and the joker is returned to the stock pile, possibly to be dealt out again. This is a good variation for beginning solitaire players or people looking to increase their odds of winning the game.


How to Set Up Solitaire for 2 People

You don't always have to play solitaire alone! Double Solitaire, as it's often called, is a way for two people to play this game. This version also requires two decks of cards (one for each player). The decks need to be distinguishable from each other in some way so players can determine which cards are theirs, so don't use two identical decks.

To set it up, the two players face each other and each set up solitaire in the typical way, with one difference: the two players will have a communal foundation area with space for eight foundation stacks to be created (two for each suit).

20 Questions is another great, easy game to play. Coming up with objects can guess can be the hardest part though; so check out our 147 ideas for 20 questions.

How do you get a baby astronaut to fall asleep? Learn the answer and lots of other punchlines with our list of the 119 best jokes!

Want more ideas for games you can play with friends and family? Check out our collections of Family Feud questions and Pictionary words you can use!