What Is a Preposition? Definition, Meaning, and Examples

Prepositions are one of the eight parts of speech in the English language, and they’re pretty important. Prepositions allow us to create complex sentences and add in important details. They play a crucial role in helping sentences make sense, which is super important when you need to communicate clearly and effectively.

But if you have to sit down and give an accurate preposition definition, things can get a little tricky. You may know that prepositions are usually short words like at, for, in, on, or under, but what is a preposition as a part of speech? What do prepositions do, and how the heck do you identify a preposition in a sentence?

To help you become an expert on prepositions, we’re going to talk about the following in this article:

If there’s a specific type of preposition you want to know more about—like prepositions of space—you can find the information quickly by holding Command + F on your keyboard, then typing in the term you’re looking for.

Grammar rules for the English language state that prepositions are defined based on their function in a sentence. So, here’s how a preposition functions to create meaning in a sentence: A preposition combines with a noun, noun phrase, or pronoun to demonstrate a relationship between the noun and another component of the sentence, often another noun and verb.

In other words, prepositions help readers understand the relationship between different nouns and verbs in a single sentence.

Now that you’ve got an answer to the question, “What’s a preposition?” you’re probably wondering what kind of relationships prepositions show. Prepositions can show relationships of time, space, or possession between a subject and an object in a sentence.

For example, in the following sentences, each preposition (in bold) helps us better understand the relationship between the cat and the table: 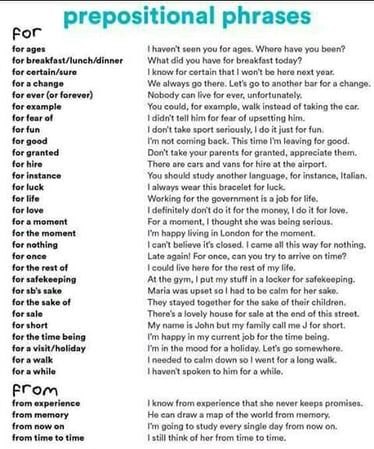 Quick note: if you’re not sure what things like nouns, adjectives, or adverbs are, don’t worry. We have a complete, expert guide to each part of speech that will teach you everything you need to know!

The cat sat under the dirty, decaying table.

Now if someone asks you, “What is a preposition?” you have an answer! Next, we’ll break down the different types of prepositions for you so you’ll be a preposition expert. 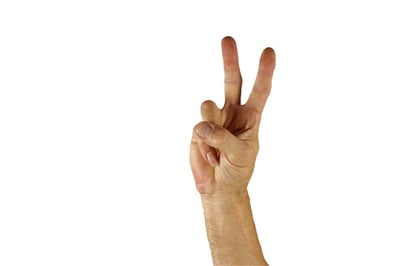 Part of answering the question, “What is a preposition?” includes explaining the two different forms, or structures, that prepositions and prepositional phrases can take. Think of form like a formula: it’s a prescribed way that you can put different prepositional words together to make them work in a sentence!

Let’s look at the two forms of prepositions below.

We’ve been playing since noon.

They walked through the field.

So just like math, prepositional forms let you swap words in and out to create meaning.

And that’s the definition of a simple preposition! Simple prepositions are used very frequently in the English language, so you’ll probably start to see them everywhere now that you know what you’re looking for.

#2: Complex (or Compound, or Double) Prepositions

There’s a little disagreement out there about what to call this form of preposition: sometimes they’re called complex prepositions, compound prepositions, or double prepositions. Just know that all of these terms refer to the same thing.

Get these chips away from me.

She laughed at his joke in spite of herself. 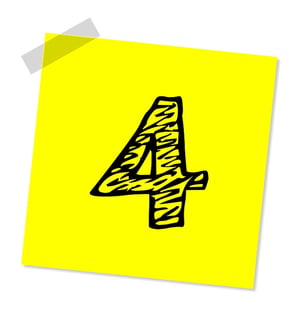 4 Types of Prepositions and Prepositional Phrases That Convey Meaning

Take a look at the table below for a list of prepositions that are frequently used to demonstrate relationships in terms of time:

So how do prepositions express time, exactly? Let’s look at two examples:

Example #1: Sean will drop off the recycling after work.

In this first example, after is the preposition of time, and after work is the prepositional phrase. But how is after establishing a time-based relationship here? After establishes time by showing that Sean will perform a specific action—dropping off the recycling—only after he has finished with work. In this case, we can see how these two elements of the sentence relate to one another: one has to end before the other can happen.

Now that you have a better understanding of how this works, here’s a second example of a preposition of time in a sentence:

In this example, at is the preposition, and at ten o’clock is the prepositional phrase. More importantly, at is establishing a precise time. In this case, the person speaking is going to go live on television at an exact time. Thus, the preposition at establishes that the time-based relationship between the subject and the verb and the object is a precise one.

Prepositions of space are used to show where a person, living creature, or other object or entity is located in space (as in, like, physical space in the everyday world, not outer space).

The words in the following list are classified as this type of preposition, meaning they show where things are located in space, including location in relation to other things, direction, and movement.

Now that we have a full list of prepositions of space, let’s look at an example of a preposition of space: one example that simply shows where something is located in space. Here we go:

There’s an owl in the chimney!

This example is pretty straightforward. Where is the owl? It’s located in the chimney. There’s a spatial relationship established between the owl and the chimney through the use of the preposition in. 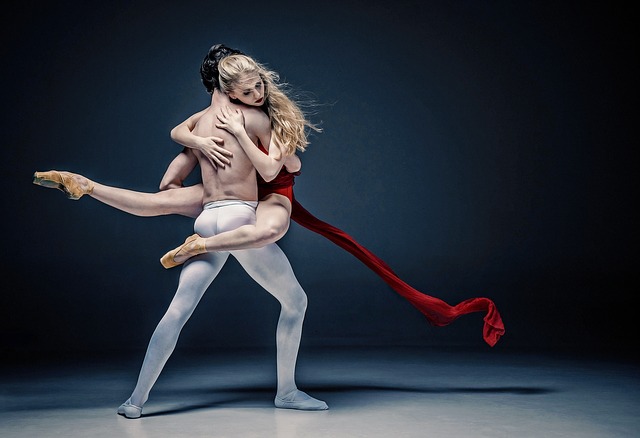 Prepositions of direction and movement help readers understand movement. In this case, the dancer is lifting his partner off the ground!

Here’s a list of words that are classified as prepositions of direction and movement:

Prepositions of direction and movement connote that something is moving through space in relation to another object. Check out this example:

Sophia threw the dart at the bullseye.

Here are a few more examples of prepositions that connote direction/movement:

They walked among the wildflowers.

The festival-goers twirled around the maypole.

There are also prepositions that can be used to connote a different kind of relationship besides relationships of time or space. These prepositions are known as prepositions of agent/instrument, and they demonstrate a relationship in which one noun performs an action on or toward another noun in a sentence.

Here are the common prepositions of agent/instrument that you need to know:

Let’s have a look at an example of a preposition of agent/instrument in a sentence:

I think the movie was produced by Disney.

This example conveys a relationship of agency, or power, between a noun and a verb: the movie under discussion in this sentence was produced by Disney. This conveys a relationship in which a group of persons has caused something to occur. In this sentence, prepositions help us understand that Disney has control over the production of the movie. It’s also important to note that prepositions of agency are usually used in sentences that are constructed in the passive voice, like in the example above.

She lit the candle with a match. 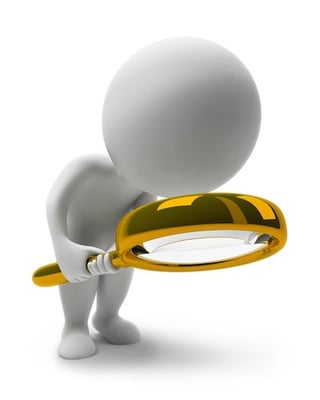 3 Top Tips for Identifying Prepositions in a Sentence

#1: Break Down the Word Itself

If you have trouble remembering where a preposition should appear in relation to the object that it modifies in a sentence, you can break down the actual word “preposition” as a memory hack. A preposition appears in front of its object, so you can think of it as being pre-positioned in front of the object.

Read the examples above one more time. In each one, the preposition comes before the object. And there’s an added bonus: when you can find the preposition in a sentence, you can also find its object, too!

#2: Remember That Prepositions Are “Anywhere a Cat Can Go”

We’ve already used cats in a couple of our example preposition sentences, but did you know that many people are taught in school that prepositions are anywhere a cat can go? Just think about it: how many videos have you watched of cats fitting themselves into bizarre places? They can go on, in, through, around, under, across, behind, between, through...pretty much any object (especially boxes). And as it turns out—all of those words are prepositions!

So If you’re looking for a way to remember prepositions of space, location, direction, and movement, just picture a cat playing with a box. If the word you’re using is somewhere the cat can go, then you’re probably dealing with a preposition.

#3: Watch Out for Verbs...and Look for the Prepositional Phrase

Something super important to know about words that are classified as prepositions is that they don’t necessarily function as prepositions every time they appear in a sentence.

We’re going to walk at the market. 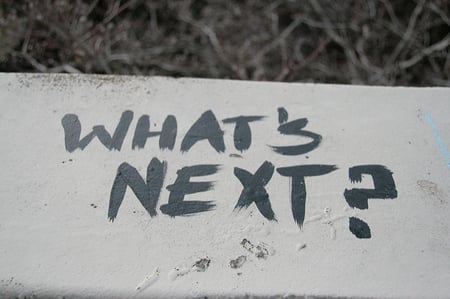 Prepositions help make your writing clearer, which is incredibly important if you want to ace the writing portions of your standardized tests. Luckily for you, we have expert guides to help you ace your SAT and ACT essays! Click here to learn how to get a perfect 12 on your ACT essay. If you’re aiming to get a perfect 8 | 8 | 8 on the SAT essay, you’ll want to check out this article instead.

You’ll also have to write stellar admissions essays if you want to get into your dream school. Start by getting expert advice on how to tackle the Common App essay prompts, then check out our blog for school-specific tips. We have thorough guides about how to write essays for the top schools in the nation, including Harvard, Yale, Notre Dame, Michigan State, USC, and more!

If you’re interested in grammar because you love to write, you might consider majoring in creative writing. If this sounds like you, you should definitely check out this list of the best 12 creative writing programs in the United States.