Yin and Yang: What Does the Symbol Mean? 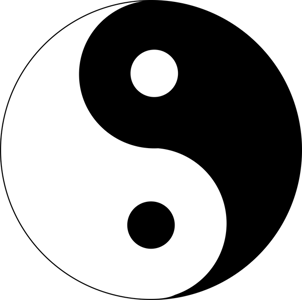 You've seen the symbol, but what does yin yang mean? Not to mention, which is yin and which is yang? Yin and yang principles have a long and fascinating history behind them, and we've compiled all the most interesting and important bits in this article. Read on to learn:

What Do Yin and Yang Mean?

Yin and yang (or 陰 and 陽 in traditional Chinese characters) represent duality, or the idea that two opposite characteristics can actually exist in harmony and complement each other. It's the same idea behind quotes like, "there can be no light without darkness." Yin (the black segment) and yang (the white segment) each represent various qualities.

In the chart below are some of the characteristics each represents. You'll see that, for each one, yin and yang represent a pair of opposites, such as black and white, light and shadow, north and south, etc.

What Does the Yin Yang Symbol Represent?

The yin yang symbol is often referred to as "taijitu" in China. It's a familiar symbol you've likely seen many times on jewelry, clothes, notebooks, etc. There are many variants of the symbol, but the most common is a circle composed of two interlocking swirls/teardrops, one black and one white. Each swirl has a dot of the opposite color in it.

The yin yang symbol represents the interconnectedness of the world, particularly the natural world. There can be no positive without a negative, no open without closed, no light without shadow. The yin yang symbol itself portrays that interrelatedness. Looking at the symbol, you can see it doesn't have a straight line going through the center to represent the divide between yin and yang. Inside, the dividing line is a soft S-shape. It shows how yin and yang are connected and constantly flowing into and out of each other. At the top of the symbol, as yang swells, yin contracts. At the bottom, yin swells as yang contracts. The ideal situation is when there is an equal balance between the two, as that is when harmony is achieved.

Within the symbol, not only do the white and black segments fit perfectly with each other to form a circle, each has a small circle of the other color within it to further show the connection between the two. The small circles also show that nothing is absolute. In all yin, there is a little yang, and vice versa. This further demonstrates the connection between the two.

The outer circle of the yin yang symbol represents the entirety of the universe. It shows that yin and yang represent everything that we know, as well as things we don't understand. 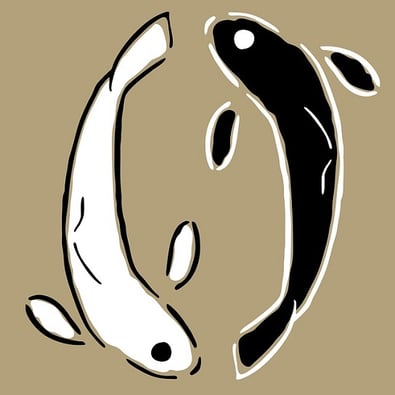 A Brief History of the Yin Yang Symbol

The concept of yin and yang has existed for thousands of years in China. The earliest known reference to the two terms was found on oracle bones where they referred to different parts of nature. A school named the "yinyang school" was also developed roughly two thousand years ago that taught the principles of balance and patterns.

During the Zhou Dynasty (1050–771 BC), the concepts of yin and yang spread more widely and began to be associated with philosophical ideas. Philosophers such as Confucius and Lao Tzu began to incorporate yin and yang principles into their teachings. It was around this time yin and yang became an important part of Taoism (sometimes called "Daoism"). Over time, the yin yang symbol has become one of the most common Taoist symbols and is often seen on Taoist temples, robes, and incense burners.

Over the centuries, yin and yang principles became part of many different aspects of Chinese and East Asian culture (we discuss some of these more in the next section).

There's no exact date of origin for the yin yang symbol, and it's unknown who first created it. However, it was definitely in use around 1000 AD when it was popularized by Song dynasty philosopher Zhou Dunyi. For several decades, particularly in the 1970s-1990s, it was a common symbol to include in jewelry, on t-shirts, etc. Many people who wear it aren't aware of all the history or meaning behind the symbol but appreciate how it looks and its promotion of balance and change.

So what's the real meaning of yin and yang? The yin yang symbol represents a variety of different principles, each of which is important in Taoism and behind. Below we explain five of the most important.

#1: Together, Yin and Yang Form a Whole

Yin and yang represent opposite forces that, when they are joined, represent everything in the natural world. Together they represent the different facets of the world and the way they need to be carefully balanced to be complete.


#2: Neither Yin nor Yang Can Be Fully Dominant

The ideal scenario is for yin and yang to be perfectly balanced and each have an equal share of the whole. When this happens, there is harmony and equality in the world.


#4: Yin and Yang Are Never Static

The balance between yin and yang is always changing; that's part of the reason why the two segments look as though they are flowing into and out of each other in the yin yang symbol. There's never a point where yin and yang stop moving, the same way the amount of light and dark is always changing as the sun rises and sets each day.


#5: External Factors Can Disrupt the Balance

Sometimes, once a balance of yin and yang has been achieved, something from outside the system can disrupt it. This principle is often used in traditional Chinese medicine (explained more below), where external factors can disrupt the balance within a body and cause health problems. 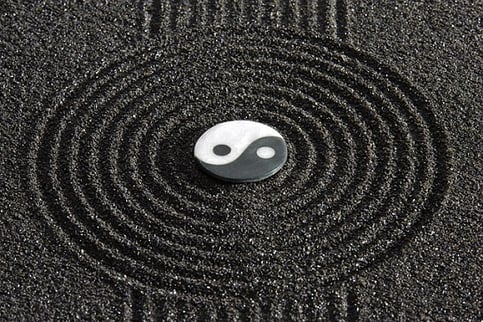 How Are Yin Yang Principles Used?

The concept of yin and yang spread to many facets of Chinese culture, as well as spreading throughout East Asia and, eventually, the rest of the world. Here are five ways that yin yang principles are used in everything from philosophy to architecture to combat.

Many types of martial arts that have their origins in China, such as tai chi, make use of yin and yang. The balance promoted by it is important during exercise movements and sparring. For example, to be successful at tai chi, one must understand both movement and stillness, attack and defense, opposites yin and yang often represent.

Feng shui is a practice dating back to ancient China that used the idea of energy forces to make many decisions, including how to orient buildings (which is where its modern-day use as interior design guidelines comes from). According to feng shui, there are invisible forces (known as "qi") that bind together people, earth, and the universe. Yin and yang are part of these forces and, to have proper feng shui, buildings should be built and aligned according to yin yang force fields so that they achieve proper equilibrium.

In traditional Chinese medicine, the body is thought to be healthy when yin and yang are in balance. Different factors, such as diet, stress, and pollution can enter the body and cause either yin or yang to dominate. When this happens, the person becomes ill because their body is no longer in harmony. The medical practitioner must determine whether yin or yang has become dominant and work to restore the balance.

Confucianism writings frequently mentioned yin and yang principles. They were spread most widely by Dong Zhongshu, a Han Dynasty politician and philosopher. He is credited with incorporating yin and yang ideas into Confucianism. Before, yin and yang were seen primarily as symbols of nature and the balance it requires, but Zhongshu created an ethical framework for yin and yang, stating that it was a person's moral duty to promote harmony and balance both within themselves and the world in general. Some Confucianists also altered yin yang principles to suit their own purposes. For example, even though it's a fundamental principle of yin and yang that neither is dominant or more powerful than the other, certain Confucianists considered yang to be superior and used that to justify men having dominance over women (who were associated with yin).

The I Ching is a divination text from ancient China and one of the earliest written sources of yin and yang being used. I Ching can be used for divination, where different hexagrams and hexagram sequences each have different meanings. In I Ching, yin and yang are each represented by three horizontal lines: yin's lines are broken, and yang's are solid. Different combinations of yin and yang lines led to the creation of 64 hexagrams. Both Taoism and Confucianism later adopted many I Ching ideas.


Summary: What Does Yin and Yang Mean?

So, what is yin and yang? They're two concepts that, together, represent the need for balance, opposite forces, and change. And which is yin and which is yang? Yin (the black section of the symbol) represents shadows, feminine energy, and generally the more mysterious side of things. Yang (the white section of the symbol) represents the sun, masculine energy, and things that are more out in the open. Neither is more powerful than the other, and both are needed in equal amounts for harmony to exist.

Have any $2 bills lying around? How much is a $2 bill really worth? Learn the answer and other common $2 bill misconceptions in our guide to 2 dollar bills.

Want to keep learning new things? We've compiled 113 of the most fascinating fun facts. We bet something on the list will amaze you!

How do you get a baby astronaut to fall asleep? Learn the answer and lots of other punchlines with our list of the 119 best jokes!