ACT Standard Deviation: What It Means for You

If you've ever come across a table listing all the ACT score percentiles, you may have seen the ACT standard deviation listed at the bottom for composite and section scores. Sadly, there is no explanation for what the standard deviation being that value means; instead, the tables just throw the data out there and move on.

What Is the ACT Standard Deviation?

In the most recent data released by ACT, Inc., the ACT standard deviation is relatively high, indicating that there's substantial variation in scores among students taking the ACT.

We've created a table below that lists the mean and standard deviation of ACT scores, including section scores (for English, Math, Reading, and Science) and composite scores. 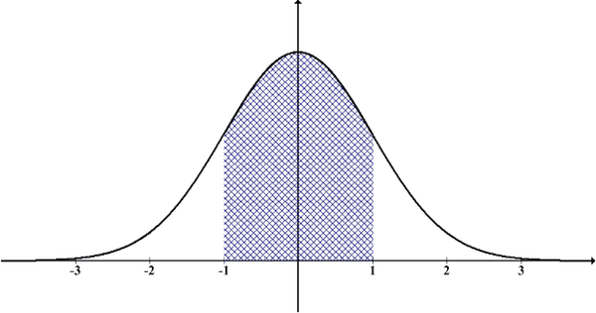 What Is the ACT Bell Curve?

For 2019-2020, the bell curves for ACT composite and section scores match up pretty well with the ideal normal curve. Because the average ACT composite score is a little higher than the midpoint of the total ACT score range (20.8 instead of 18.5), the ACT bell curve is slightly shifted over to the right, but otherwise has the same shape as a regular bell curve.

Since it can be hard to get an idea of what data looks like just by reading a chart, we've graphed out the ACT bell curve for ACT composite scores below in blue. 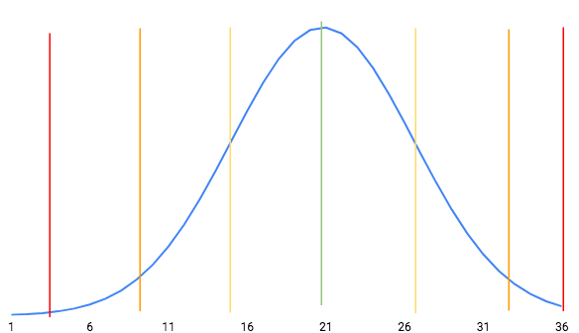 The two vertical yellow lines on the graph indicate the first standard deviation composite scores, 15.0 and 26.6. Roughly 68% of ACT scores fall somewhere between these two lines.

The two orange lines on the bell curve graph indicate the second standard deviation composite scores, 9.2 and 32.4. The scores of 95% of all students who took the ACT fall in between these two lines (including the 68% of students who scored between a 15.0 and 26.6).

The two red lines on the graph indicate the third standard deviation composite scores, 3.4 and 38.2. However, since the ACT only goes up to 36, there are no students who scored above that, which is why the bell curve of ACT student scores cuts off abruptly at 36. About 99% of student ACT scores fall between the two red lines, with the rest (<1%) falling below the left red line (scores of 3.4 and below).

Why Is the ACT Standard Deviation Important?

For the most part, the precise details of the ACT bell curve and standard deviations don't matter as much to students as percentile information.

Any information you'd get from knowing the various ACT standard deviations you can just as easily get (with more precision) from your scores' percentile ranks, which are included on your score report. For example, seeing that your 33 composite score is in the 98th percentile and so that 98% of students scored as well as or worse than you is probably more helpful than knowing you scored slightly more than two standard deviations above the mean ACT score.

Still, there are a couple of ways you can put your knowledge of the ACT standard deviation to good use.

Understand How Much ACT Scores Vary

The ACT standard deviation for composite scores is 5.8, which is on the higher side, indicating that student scores vary quite a bit.

That there is a lot of variation among ACT scores is not surprising: the ACT needs there to be enough variation in scores that, for instance, a score of 25 indicates a meaningful difference from a score of 31. If everyone scored between 15 and 21 on the ACT, the ACT wouldn't be a useful tool for colleges to use to see performance differences between students.

What this means for you as a test-taker is that you'll need to score fairly high on the ACT if you want to stand out as a high-achieving student. To score better than 98% of students on the ACT with a mean of 20.8 and a standard deviation of 5.8, you'll need to get a composite score of 33 or better. 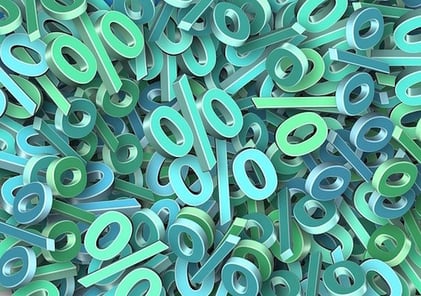 Learn How Your ACT Score Compares to Others'

Knowing the ACT standard deviation also tells you how well you performed compared to other students. If for some reason you don't know or remember your ACT percentile, you can even figure it out, based on the mean and standard deviation of ACT scores.

If you manage to score more than two standard deviations above the average ACT score, then you performed better than a whopping 97% of students! Not only is this an amazing achievement, but it also puts you in a strong position for the most competitive state schools like UC Berkeley and University of Michigan (Ann Arbor) and even some Ivy-League schools like Dartmouth and Cornell.

By contrast, if your score is more than one standard deviation below the average ACT score, you'll need to study hard for your next ACT to improve your score enough to become a competitive applicant for most schools. To get your composite score to a 28 or higher, you'll need to put in a substantial amount of good studying time and effort. 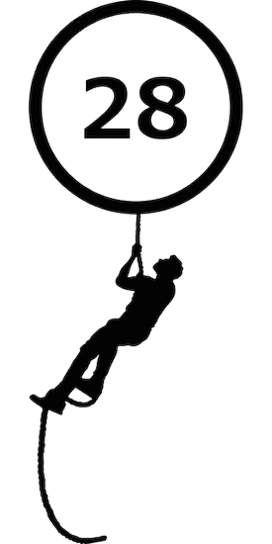 It'll take effort, but you can improve your low ACT score up to a 28 with hard work and a good study plan.

Looking to get a more precise idea of how well you scored compared to other students? We have the most recent data for what ACT scores are which percentiles here.

Thinking about applying to highly selective schools but not sure how high a score you need? Read up on the ACT scores you need to get into the Ivy League and the colleges with the highest ACT scores in the US.

What's the lowest ACT score you can get into college with? Find out the minimum ACT score for college here.